The History of Sports in Film: Charlie Chaplin’s ‘The Champion’, ‘Rudy’ to Chadwick Boseman’s ’42’ 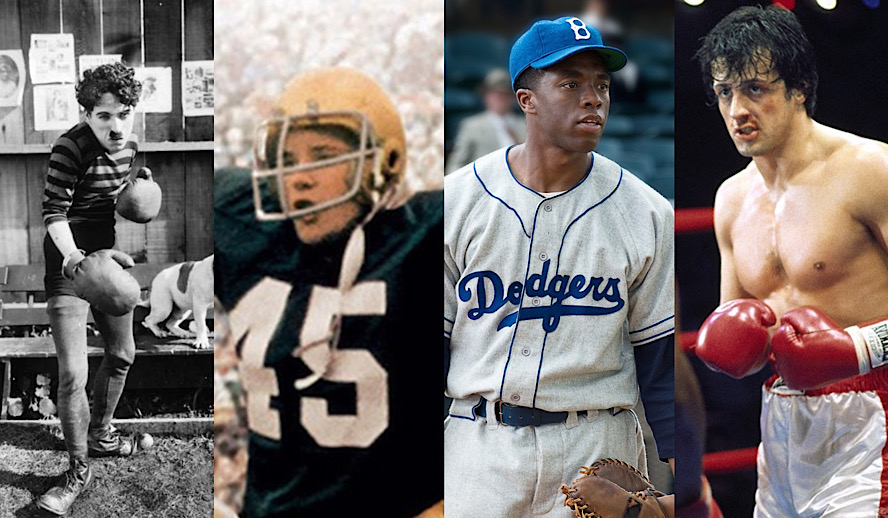 History of Sports in Film: Sports have a long history in America and are ingrained in the culture. They also have a rich history in film. As early as the silent film era, sports were depicted and used as a vehicle for stories to connect with audiences. Charlie Chaplin’s The Champion is a silent film about the Challenger and his journey as he prepares to fight the world champion. He falls in love with his trainer’s daughter and runs into trouble when a gambler wants Challenger to throw the fight. A handful of silent films about sports like Chaplin’s The Champion and The Rink paved the way to the talkies.

The Champ, a movie about an alcoholic ex-boxer trying to provide a good living for his son, was the first sports movie to win an Oscar in 1932. Fifteen sports films have picked up Academy Awards at the Oscars, but numerous have been nominated over the history of film. The Pride of the Yankees, National Velvet, Somebody Up There Likes Me, and The Hustler covered the next two decades for Oscar-winning sports films, but a lot more happened during that time in with the genre.

Sports in Film: Diversity and Inclusion

Knute Rockne, All American, is a 1940s film that tells the story of Notre Dame football player and coach Knute Rockne. A Film Reference article breaks down how the only two African American characters in this movie were a kid at the beginning of the film who is knocked down by the other team, and a porter at the end of the film who asks if the main character would like his suit brushed off. The article reflects on how African Americans participated in defending the country during World War II, but in the film, it was clearly depicted that the American Dream was not an equal opportunity.

Before the 1950s, most sports films did not feature African Americans in starring roles. Spirit of Youth and Keep Punching are exceptions. Boxing films were some of the only movies to feature non-white characters, mostly because boxing was the least exclusionary professional sport of the time. Like the representation of women in film during these times, African Americans and other non-white races were portrayed in service to the majority-white male-dominated stories.

In the 1950s, films like The Joe Lewis Story, The Jackie Robinson Story, and The Harlem Globetrotters featured African American athletes and started to reflect the falling barriers of the exclusion of non-white races in sports. As these barriers around race started to be brought down, films started to include more stories that did not focus exclusively on the white male narrative. In the 1970s, films like Brian’s Song, The Bingo Long Traveling All-Stars & Motor Kings, and The Greatest began to explore a shift in different narratives. Bruce Lee was a pioneer of martial arts films and crossed divides with his rise to fame in the 1970s with his roles in martial arts films. The Jesse Owens Story in the 80s did this as well.

A pivotal moment for the representation of minorities in film coincided with the rise of the National Basketball Association (NBA) in the 1980s and 1990s. Muhammed Ali, who starred in The Greatest, passed the torch to Michael Jordan for best known American athlete. The Last Dance showcased Jordan’s extraordinary impact on the game and revealed his and the NBA’s impact across the globe. This influence crossed over to film when Jordan took time between seasons to star in the commercially successful Space Jam.

Basketball movies blossomed during the 1990s. In addition to Space Jam, films like He Got Game, White Men Can’t Jump, The Air Up There, and Blue Chips were other basketball stories that came out during the decade. Hoop Dreams was a revolutionary documentary about two high school students pursuing their dream of the NBA. This film prompted the addition of the Best Documentary category at the Oscars. It was also a marker for how far representation in the film had come and what the documentary genre could do.

The 1990s also started to feature more women in film and behind the camera. In sports, A League of Their Own is a classic that can remind those who need it that women are strong, independent, and should not be relegated to minor roles that support male counterparts. Kathryn Bigelow’s Point Break helped launch her career with its huge commercial success and squeaks into this article with its portrayal of surfing. However, it wasn’t until the early 2000s that stories of women in sports were more frequently featured. Films like Love and Basketball, Stick It, Blue Crush, Million Dollar Baby, and Whip It stepped up the representation of women in the genre.

The history of sports in film covers much ground. Sports films have been around since movies were being invented and commercialized. There are landmarks of the genre that broke molds and showed how sports films could capture unique but universal stories. Below will be a list of great sports films that highlight the capabilities of the genre. It might be a contentious list, and there are sure to be films that are left out, but the aim is to focus on sports movies, not mentioned before in this article, that have garnered acclaim and are benchmarks of the genre. To keep the list a reasonable length, there will only be ten listed below.

One that we will highlight before the list is 42. The late Chadwick Boseman portrayed Jackie Robinson in the film that chronicled his time on the Brooklyn Dodgers and the racism he faced in the process of being the first African-American in Major League Baseball. As stated before, Robinson was at the forefront in breaking down racial divides in sports. The film 42 honors Robinson’s role in history as well as baseball.

Here are another ten classic films in sports:

Most of these films were nominated for Oscars, and all of them have loyal supporters. They are the tip of the iceberg when it comes to the genre of sports films. They range from Comedies to Dramas and will always have a place in the history film. There are too many to mention in one article, but that is a testament to how popular and pervasive sports films are in movie history.

What are some of your favorite sports films?