The Animated ‘Bombay Rose’ is an Artistic Rumination on Life, Death, and Love 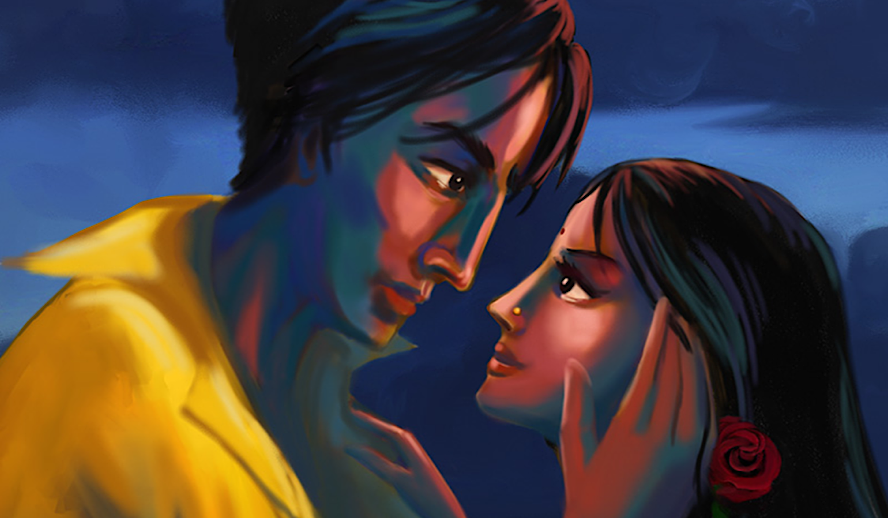 A Modern Tale of Impossible Love

‘Bombay Rose’ is a love story about two people living on the streets of Bombay (the former name for the city of Mumbai). It centers around a young woman named Kamala (Cyli Khare), who makes flower garlands during the day and secretly performs in dance bars at night in order to support her grandfather and younger sister, Tara. She is regularly flanked by a seedy man named Mike (Makrand Deshpande), who uses money to entice her into a life in Dubai – a proposition that she considers throughout the film. One day, Kamala meets Salim (Amit Deondi), a young Kashmiri man also selling flowers on the streets.

The two strike up a romance, which, for the most part, only exists in their daydreams. While Salim imagines himself to be the likes of fictional Bollywood Star Raja Khan, heroic and masculine, Kamala imagines them living as elegant royals in the past. From the beginning, the pairing is unlikely to end up together. Not only does Mike threaten to come between them, but Kamala is a Hindu while Salim is a Muslim – two religious groups historically discriminatory, and even violent, with each other.

The film also follows other individuals in the city such as an old film actress and a hearing-impaired orphan boy, giving ‘Bombay Rose’ a very Slice of Life feel. By the end of the film, these intertwining stories come full circle in heartening ways.

Though the film is very ‘Romeo & Juliet’ with its ideas of star-crossed lovers, director Gitanjali Rao says she doesn’t want the film to be focused on tragedy, or just be another film about the Mumbai slums. Instead, she sees the film as offering a glimpse into the richness of city life, where “life spills out of people’s houses in the streets” and we are able to see how people “fall in love, fall out of love, have fights, and start families.”

A distinctive painted animation style permeates ‘Bombay Rose’ in a unique look that successfully sets it apart from other animated films. Reportedly, the film was made frame-by-frame through digital painting by 60 artists, taking 18 months to achieve. This vivid, impressionistic style is layered with moving and stationary elements, often favoring only the main characters and elements in terms of detailing and texture. Movement in the film isn’t necessarily jittery, but it’s not smooth either – tittering in the balance between the two. Ultimately, this helps give the film a handcrafted, personal feel. Rao also strays far from realism in her transitions, centering scene shifts in associative images and color.

At the same time, ‘Bombay Rose’ flits between different animation styles as well, though always still under the umbrella of that painted animation style. These transitions occur when we enter different characters’ fantasies – which are wildly different from the stark reality of their lives on the streets. For example, when the actress (played by Amardeep Jha) reminisces about her olden film days, the film transitions into black & white. Or, when Kamala visualizes her and Salim existing in old fairy tales, the style becomes a bit more two-dimensional and traditional. Rao has spoken about how some of these influences come from pop art and Indian folk art. Thematically, these different stylistic shifts allow us to see how different characters see life in their own distinct ways.

This all relates to another important element of the film: magical realism. Many aspects of the film are subjective, giving a deeper look at Kamala’s personal perspective in a tailored way. For example, when Mike appears in a scene, he often appears as a menacing taloned bird before transitioning into his human form.

A Film Tied Together by Music

Music is also a really large aspect of the film, both in terms of score and actual lyrical songs. From driven percussion, heart-soaring odes, music from antique music boxes, Bollywood-inspired songs, and more commercial music, the film showcases many different music styles to illustrate the breadth of life in Mumbai, which is filled with the old and new. From songs in Hindi, English, and even Spanish, the film utilizes international music from around the world to characterize this bustling metropolis. Film in Ether stated that the film used “Indian songs from the 1950s to the 1970s like Lorna’s ‘Red Rose,’ Laya Project’s ‘Tapatam,’ and even ‘Cucurrucucú Paloma,’ which Wong Kar-Wai fans will quickly recognize.” Through these choices, Rao emphasizes the idea that ‘Bombay Rose’ is tied together by universal experiences, even if it takes place in only one corner of the world.

A particular musical motif used in the film is through a song called ‘Rewa Naion Mein Rahe,’ which roughly translates to ‘Rewa, The River Dwells in my Eyes’ in English. Sung by Kamala’s voice actress herself, the song is used repeatedly to showcase Kamala’s lamentations and longing for a different, more free life. This “theme” of Kamala’s is then returned to at the end of the film, but sung in a different way to show her growth and character arc. It’s a wonderful, emotional song filled with heart and sorrow. The lament also feels uniquely feminine, based in Kamala’s own obstacles which are emblematic of her identity as a woman in India. These are hardships that she can only admit to herself, introspectively, never being able to publicly reveal that she is struggling.

Overall, ‘Bombay Rose’ excels as a romantic, humanist story complimented by a gorgeous animated style. It explores the disconnect between stark reality and the outlandish fantasies people dream of instead – a venture into the creative souls that everyone holds. For those unfamiliar with more artistic animated films outside the realm of Disney and Pixar, this is a great film that challenges animation ideals and conventions. It’s also an animated film not aimed at children, so it can be enjoyed by older and mature audiences. The film has been hugely popular too. ‘Bombay Rose’ first made waves in the festival circuit, premiering at Venice Film Festival in 2019 and going on to receive many accolades and awards before being universally released on Netflix this month.