‘June & Kopi’: A Well-Intentioned Film For Any Fans of Family Pet Dramas and International Cinema 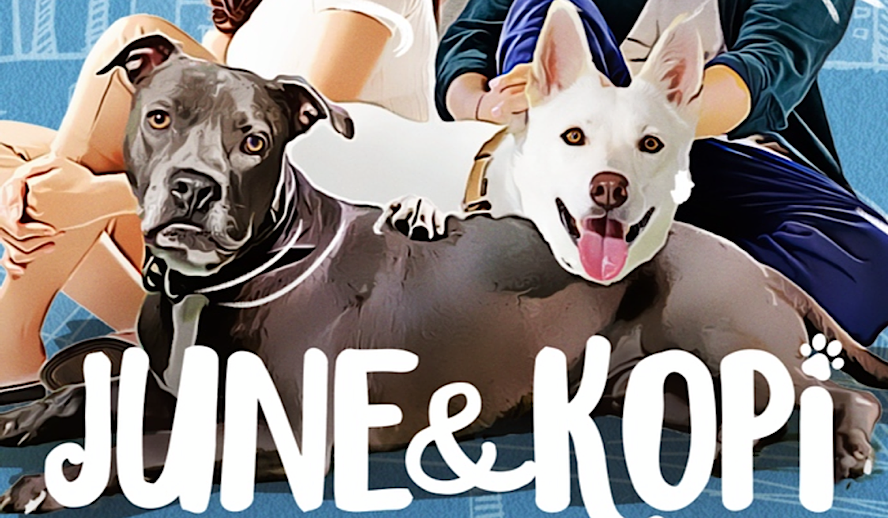 Co-Writer, Director, and Producer Noviandra Santosa delivered a cute and interesting family pet drama that may appeal to more children, the filmmakers’ target audience, than to adults. Titien Wattimena helped Santosa write the screenplay, and it’s structured in an ambitious way to cater towards a mass audience and is very snappy with its plot progression. The benevolence at the heart of this film is what keeps it pulsating, and is purposeful in its attempt to offer a child-oriented Cinematic guidance of several cultures. Indonesian Cinema has had some impressive pictures and is on the rise in regards to artistic innovation and international audience reach. Though the pacing is offbeat at times, the structure is disjointed, and it’s sometimes unclear the kind of narrative the filmmakers were trying to put together, the virtuous message that’s weaved into the subtext forms a connective tissue that makes the film enjoyable.

This film is ultimately, a family drama revolving around the family pet plot that’s been a staple of American cinema. Examples of heartwarming, and oftentimes heartbreaking too, pet films that were commercially successful include Richard Gere’s ‘Hachi: A Dog’s Tale’, Owen Wilson and Jennifer Aniston’s ‘Marley & Me’, and most recently, Josh Gad’s ‘A Dog’s Purpose’, Hulu’s ‘Dog Days’, and ‘A Dog’s Way Home’. ‘June & Kopi’ is quite different from those, and its cultural and stylistic differences distinguish it from others in the same genre. Those qualities alone give this film merit and makes it worth a watch for anyone in the mood for an easy-to-watch Indonesian family movie.

Acha Sepriasa, from ‘Daemon Mind’ and ‘Test Pack’, and Ryan Delon, from ‘Strawberry Surprise’, play a young rich couple named Aya and Ale. They both share a collective goal to start a family, but have difficulties along the way, but they have a pitbull, whose name is Kopi. In search of a buffer to the challenging process of starting a family, they add to their household with not a human baby, but an adult stray dog who they decide to name June. Building the setup and establishing character goals and motivations early on in the narrative is where the filmmakers fall short in their attempts to make a Hollywood-esque Family Pet Drama movie, but there is enough foundation built that the protagonists are at least engaging. Aya does become pregnant, and even though the couple was worried about their dog’s behavior around the baby, everything goes swimmingly as they nurture their new family and start their new lives.

After the setup, the story really becomes about the dogs, and they share a comedic and fun banter back and forth that’s fun for anyone who is a fan of pet movies. The second act of the movie is also where the disjointed character dynamics are highlighted, as the dogs become the main focus. Rather than growing as characters and showing the necessary aspects of the family’s lives, the primary characters become dull and almost lifeless at times, with Aya being the archetype of the extremely caring ‘Mom’, and Ale being overbearingly crass, very frustratingly at times that his character becomes completely unlikeable at times. The filmmakers decided not to capitalize on making Aya and Ale’s child, Karin, played by Makayla Rose Hilli from ‘Gundala’ and ‘Sakral’, as being the center of the story and the gripping piece to the web of characters in an aimless plot, but they focus solely on her having asthma, without making the character a relatable or wholesome person first. Their characters do get redeemed in some nice moments, but overall it’s like all the humanistic characters that inhabited them early on in the narrative were sucked away and transported to the dogs.

The second act becomes more vignettes of the dogs’ adventures rather than a cohesive narrative about the family and the dogs, with balanced interplay on the impact they each have on each other. The dogs are really a treat to watch and really stole the show as far as acting chops go. June is the oddball dog, considering it’s the stray, while Kopi more so plays the comedic ‘straight man’ role. June’s peculiar traits, such as her fear of children, or her mysterious backstory is never explicitly stated to the audience, and no reason can be derived by the subtext, so her character arc is largely left vacant, and it becomes clear by the end that she was merely a spectacle in the movie.

Kopi really doesn’t offer any personality or backstory either, so it’s unclear to the viewer what their purpose is rather than just being a cute dog to react to June’s antics. The ending is satisfying in some ways, but not very fulfilling to the overall narrative, with many loose ends and unclear creative choices occupying the resolution and climax of the story. It’s a structure and stylistic choice that will more than likely rub a majority of viewers, especially of Netflix’s content, the wrong way, and may deter this film from garnering critical and/or commercial success.

As far as completed productions go, Noviandra Santosa wrote and directed one film before ‘June & Kopi’ in 2019 titled ‘Pintu Merah’, a horror film about a journalist investigating a murder. The filmmakers’ talents were clear in the film, and it was met with acclaim, particularly in Indonesia. ‘June & Kopi’ will certainly find its audience, and hopefully will give Noviandra Santosa more opportunities to bring her talents to the rest of the world. The film is also emblematic of large production companies, such as Netflix, bringing international Cinema to wider, and more diverse audiences in ways that have never been so simple and internationally fluid.

Other streaming services don’t even compare to Netflix’s outreach to International talent, but with an entertainment industry rightfully aiming more towards diversity and inclusion on a global scale, it’s likely more and more films from artists all around the world will hit the Western Cinema dominated streaming services homepages. It would be incredible to see more Indonesian Cinema, and more Cinema from around the globe, and it’s a promising sign to see Netflix pioneering that diverse scope of talent and putting it on the front lines of their streaming services, reaching audiences in ways many international countries never have.