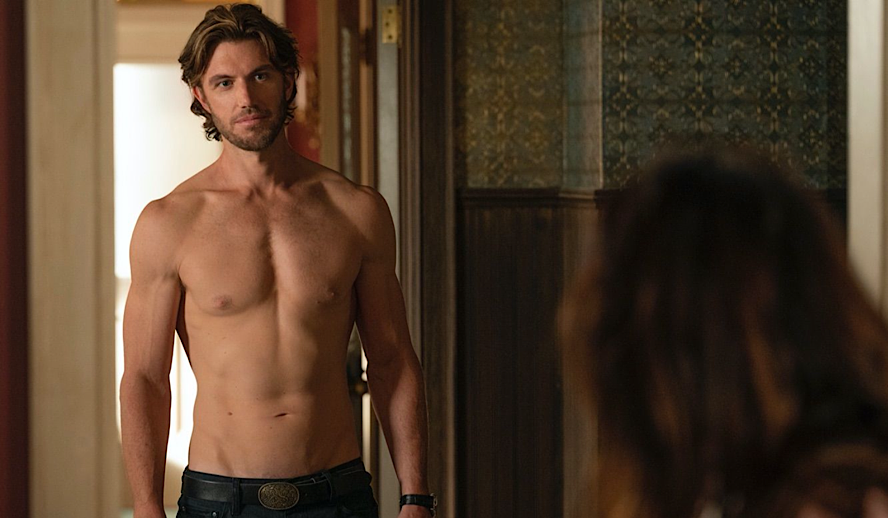 ‘Sex/Life’ is a show that is hard to describe in words. Not due to complexity or thought-provoking theming, but in the fact that it’s hard to find reasons for why this show is different compared to many others like it. Its main cast of characters is intriguing and brings a much-needed spark to the show, but it isn’t enough to carry this aimless series. The show is advertised by Netflix as a comedy-drama, it leans heavily into the drama aspect with a heavy focus on romance. For those interested in sexual dramas, this might be the show for you. But otherwise, the show is too generic and similar to already-existing shows to really find its own footing.

This series is inspired by the book ‘44 Chapters About 4 Men’ by B. B. Easton. The series stars Sarah Shahi as Billie Connelly, a woman who’s living a quiet, simple life out in the suburbs with her family. She has two adorable children and is happily married… or so she thought. Despite living out the relaxed, wholesome life she had always dreamed of, she feels unfulfilled. Her marriage to her husband, Cooper (Mike Vogel), is one of love and stability. Her best friend Sasha even points it outright to her in the first episode: “How many millions of women would kill for what you have?”.

Instead, Billie finds herself missing the sexual thrills she experienced all throughout her younger years. Specifically, her time with her ex-boyfriend Brad (Adam Demos). All of this leaves her questioning her life up to this moment and what she should do about these feelings. It’s a sexy romantic drama with hints of melodrama in between.

Through the thin plot of ‘Sex/Life’, the actors have a chance to shine. Sarah Shahi does a great job as Billie, portraying a woman who is in emotional limbo over the life she lives and the sexual passion she desires. Shahi is no stranger to television, starring in a wide variety of dramas such as ‘Fairly Legal’ or ‘Person of Interest’. She plays Billie as someone who’s torn; Billie loves her life as a stay-at-home mom, living in a large house in the suburbs and taking care of her two kids. But her marriage to Cooper has hit a lull and she longs for the raw intensity and desire that comes with being a single, free woman.

Mike Vogel’s portrayal of Cooper is a brighter spot and something that viewers should look out for when watching the show. As Billie’s husband, he is a loving, caring man who loves his family dearly and would give his wife the world. Yet, his busy work life is interrupting his sex drive and he cannot be this sexual being his wife wishes he could be. They’re at a crossroads, and this provides the main conflict of ‘Sex/Life’. How are these two people with different abilities and desires going to be able to fulfill each other? Will Cooper be able to sexually satisfy Billie, or will she have to find sexual satisfaction in another man?

That’s where Brad comes in. He’s that mysterious, seductive rich guy who can garner Billie’s interest and sweep her away from a life of monotony. Adam Demos has that look of a guy with a lot to hide, so it works as he seduces Billie in flashback sequences as we watch how the two first meet. The character who raises my curiosity the most, however, is Sasha Snow, played by Margaret Odette. She’s the person who Billie trusts the most when it comes to revealing her second thoughts about her marriage, but more importantly, she’s interesting. She has a Ph.D. and is a psych professor, and she goes out and parties every weekend. She knows what she wants and what she doesn’t, and she’s not afraid to tell others how she feels. Odette plays her with utter confidence, and her portrayal adds a spark that ‘Sex/Life’ definitely needs. She’s a character to look out for.

A Story About Sex and Connection

Despite strong performances from the actors, sadly it’s not enough to carry this show. The problem that lies within ‘Sex/Life’ is that it doesn’t really bring that much difference to the table. Many television shows and movies use the trope of the woman who’s settled down but internally unsatisfied. It’s nothing new. Now, tropes like this can be interesting if they’re altered slightly to change things up. But ‘Sex/Life’ doesn’t really seem to be interested in changing things too much. I must admit, it did change things up a bit when they allowed a certain revelation to come out in the middle of the first episode rather than wait until later in the season to reveal it (like most shows would). But besides that, the plot feels very formulaic.

Now, besides the focus on Billie’s life and navigating her personal relationships, the show also focuses on her sexual drive as well. Billie loves sex, and she has had a lot of it in her life. To her, it’s a way of connection, whether that be having sex with a different guy every week in her younger years or with her husband now. The wilder and more passionate the sex, the more connected you feel with another person. That’s what ‘Sex/Life’ is all about, is Billie chasing that emotional bond with someone through sexual escapades.

In the end, ‘Sex/Life’ is a show that feels like it retreads the same water as many other shows. Despite the fascinating characters and the actors doing their best to elevate this drama, thin writing and uninteresting plot developments just bog this showdown too much. While it could go in an interesting direction with exploring the idea of monogamy and the connection some might find in sexual intercourse, ‘Sex/Life’ never makes that leap. Instead, it focuses on the steamy drama of cheating and marriage, all with a focus on lots of sex. If this fits the kind of show you’d be interested in, then it will perfectly fit what you are looking for. But otherwise, this show could use a different spin or more engaging direction to make this series stand out more.

All 8 episodes of ‘Sex/Life’ are streaming now on Netflix.