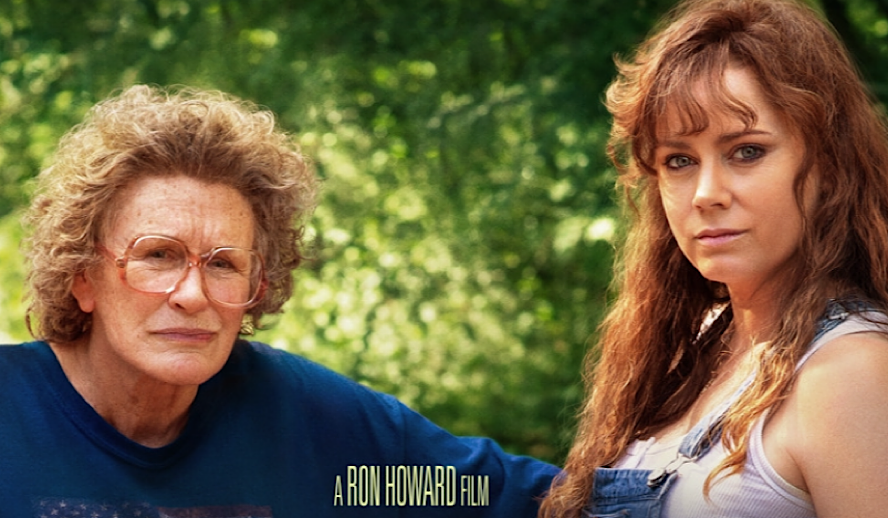 Ron Howard’s latest drama, Hillbilly Elegy, finally debuted on Netflix after much anticipation and intrigue, with the film even garnering Oscar-buzz ahead of its release. The film’s notable stars, Glenn Close and Amy Adams, transform themselves into an impoverished and troubled mother-daughter duo. Collectively sharing 13 Oscar nominations and zero wins, the two actors were helmed as strong contenders for next year’s Academy Awards, both women believed to be long overdue for the elusive award by industry standards (Close currently sits with a historic seven Oscar nominations without a win, the most of any woman, and Adams is currently tied for second place with six).

Hillbilly Elegy has an undeniably strong premise. Based on the memoir by author J.D. Vance, Vance’s life is portrayed by Owen Asztalos and Gabriel Basso throughout the film’s time-shifting narrative, as Bev Vance (Amy Adams) struggles as his drug-addicted mother, and Mawmaw (Glenn Close), J.D.’s grandmother, does all she can to hold the broken family together. Despite a memorable and riveting performance from Close and the film’s initially refreshing look at a forgotten America, Hillbilly Elegy, unfortunately, struggles to live up to its potential.

A Strong Opening That Quickly Wavers

Glenn Close dominates the screen with her transformation into Mawmaw. The tough but nurturing, cigarette smoking grandmother provides a character-driven performance that shines throughout the film. Hillbilly’s opening scenes provide a simple yet carefully crafted world, its imagery displaying a sense of authenticity toward the beauty, nostalgia, and harshness typically associated with rural America, traits that immediately immerse the viewer into the story. Both Close and Adams are initially unrecognizable in their roles: dressed in flowing nightgowns, loud and unkempt hair, denim overalls, and largely without makeup, these aesthetic traits successfully add to the world’s realism and immersion.

J.D.’s (Gabriel Basso) voice-over narration, depicting his complicated relationship with Kentucky and Ohio, where the bulk of the film takes place, accompanied with Young J.D.’s (Owen Asztalos) visual imagery of peddling on a bike toward a local lake, trying to soak up as much of the atmosphere as he can before being dragged back to some semblance of “civilization” in Ohio, offer a strong juxtaposition between his two worlds: J.D.’s complicated childhood nostalgia and his need for adulthood security.

After an initially strong start to its narrative, Hillbilly strangely shifts into a kind of melodrama, at times offering uninspired dialogue backed with a soap opera-like soundtrack likely meant to help illustrate the film’s building tension, but with admittedly varying results. Scenes that depict the family’s troubled dynamic, such as J.D.’s childhood memories, come off sounding unintentionally comedic at times, causing the story to struggle in finding its tone and central focus; this may be attributed to the film’s occasionally clumsy dialogue and a surprisingly reserved performance from Adams during these tense scenes.

Certain moments, such as J.D. accidentally knocking over a baseball card display rack, are strangely predictable and clunky in execution, causing the viewer to feel as though they’re watching a rehearsal rather than a final filmed performance. While the film initially soars with its cinematography and captivating visual imagery, there isn’t a real display of believable chemistry between the characters as far as thirty minutes into the film, unfortunately causing Hillbilly’s narrative structure (jumping between the present and the past) to look disjointed, with character backgrounds and motivations kept unclear until well into the third act of the story.

While the film’s premise offers a realistic-looking glimpse at a forgotten and rural America, one that is largely unrepresented in today’s cinema, Ron Howard’s drama unfortunately only provides a surface-level exploration of its deeply complicated themes, such as generational poverty, domestic abuse, and drug addiction. Hillbilly’s focus on these themes do provide real stakes for the film, especially Bev’s drug addiction, and its repeatedly grim consequences, but Howard’s decision to disguise them with an almost Hallmark-like filter, as though worried the film’s heavy subject matter would scare off a more sensitive audience, is disappointing.

Glenn Close’s transformation into Mawmaw is simply riveting. Although lacking any real presence in the first half of the film, Close eventually provides an extremely crafted, thoughtful, and show-stealing performance. Her character’s motives and struggles are consistently clear, and Close’s screen presence notably elevates the entire cast and film (her scenes opposite Owen Asztalos, who plays Young J.D., are especially moving). Close provides a deeply layered character whom the audience alternately roots for and even against at times, and is undeniably the most memorable part of the film, making Close deserving, at the very least, of another Oscar nomination.

Amy Adams does provide a memorable performance in her own right as Bev Vance, but the script doesn’t provide her character with enough background or exploration, causing Adam’s performance to occasionally miss its mark. While Adam’s does skillfully illustrate Bev’s visually disturbing breakdowns, the viewer is ultimately left not fully understanding her inner character nor the exact reasons that fuelled Bev’s actions. Bev’s characterization is mostly revealed through brief flashbacks, which do provide some context into her erratic behavior but are still not enough to fully understand her complex relationship with her family. In the end, the scenes portraying Bev’s meltdowns and the family’s general dysfunction come off as largely hit and miss in regard to their emotional impact on the audience.

The Film’s Structure Ends up Hurting Its Narrative

Hillbilly Elegy utilizes jumping through time, from the past back to the present, to illustrate J.D.’s journey of growing up poor and uncertain of his future, to eventually attending college and trying to achieve a level of security his family has never known. The film makes a point to show J.D.’s formative years and childhood traumas, as well as his present-day struggles of being a young college student, which do provide strong and emotional moments (especially scenes involving Mawmaw), but the film again struggles to provide concrete details to better understand Bev’s character. The film simply feels too disjointed and rushed, with scenes related to childhood memories often clashing with the film’s underlying present-tense narrative.

An Entertaining, Albeit Bumpy, Ride

Hillbilly Elegy is an undeniably ambitious film. Based on the memoir of real-life author J.D. Vance, the film adaptation does provide memorable performances from Glenn Close and Amy Adams, in addition to strong visual imagery and an original and engaging premise. Although it’s sure to nab at least a couple of awards-season nominations, the film is ultimately bogged down by its sugar-coated subject matter, disjointed narrative, and strangely melodramatic tone. Despite its shortcomings, Hillbilly Elegy is still worth the ride, provided viewers temper their expectations.