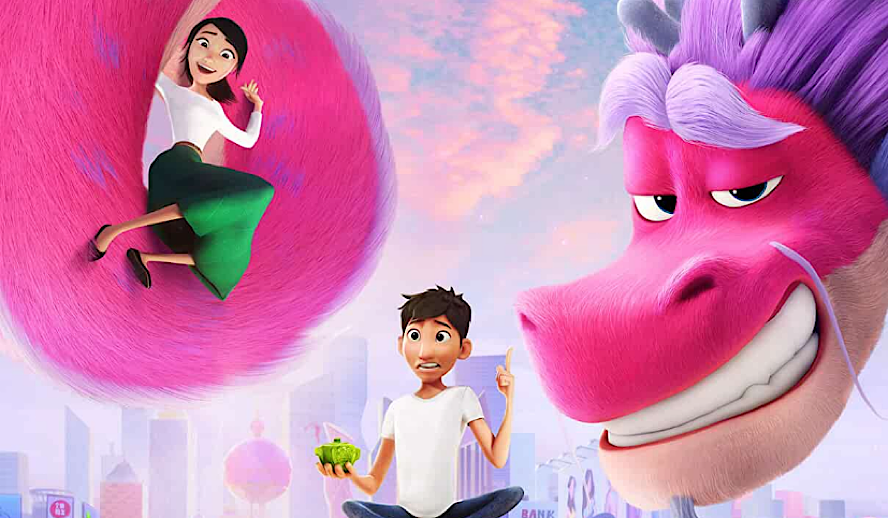 “You’re the peasant. She’s the princess. It’s a tale as old as time!”

‘Wish Dragon’ is an animated comedy film written and directed by Chris Appelhans in his directorial debut. The story follows Din (played by Jimmy Wong), a working-class college boy who comes across a magic teapot that holds an all-powerful “wish dragon” named Long (John Cho). Long offers Din three wishes to use, and with this newfound power, Din aims to win back his long-lost best friend, Lina (Natasha Liu Bordizzo), who he hasn’t seen since childhood. It’s a story of friendship and hope, and finding what’s really important in life.

Related article: Netflix Conjures Up ‘Trese’, A Gorgeous New Anime Series That Has Both Style And Substance

What caught my interest when first hearing about this film was how it’s being produced by Sony Pictures Animation, along with other Chinese-based production companies. Sony has been killing it recently in the animation department, their most recent release being the positively received ‘The Mitchells vs the Machines’. I was curious to see how this one might fare compared to their other works. Also, as someone who loves the web series ‘Video Game High School’, I have always been a fan of Jimmy Wong and was excited to see him get a role in the live-action ‘Mulan’ film last year. Now, he’s moved on to voice-acting here, and he gives a great performance in the starring role.

The Voice-Acting Brings the Comedy

Wong does a good job as Din, portraying a character whose charming optimism is fun to watch. His positive attitude almost comes off as naivete, but in an endearing way that makes you want to root for him. He’s a great foil for Cho’s Long, who just wants to get the three wishes over with so he can be free of his duties as a wish dragon. Long has an annoyed attitude towards the world around him, believing everything can be solved with money and power. This comes to clash with Din’s worldview, who believes friendship is more important than any sort of selfish desire.

Together, they make a great comedic pairing, as Long’s unfamiliarity with modern-day life and technology leads to great reactions and some very funny moments. His reactions to modern inconveniences are a great source of comedy. When both characters get stuck in traffic, Din keeps trying to irritate Long in order to get him to fly them to their destination. This all leads to a funny sequence as Long goes absolutely insane from the constant beeping of car horns and traffic noises on the freeway. I mean, come on, who doesn’t hate traffic? It’s all relatable comedy that is made goofier by the fact that it involves a literal dragon having to deal with a normal issue that people deal with daily.

The rest of the characters in ‘Wish Dragon’ are great as well. Natasha Liu Bordizzo sells her performance as Lina, Din’s childhood friend who has grown up and is unhappy with her rich, materialistic lifestyle. She’s someone who is just trying to find happiness in a world where she has everything. It’s easy to see throughout the film how these two became such great friends; They easily bounce off of each other, and that’s apparent by how much chemistry Wong and Bordizzo have with each other. Aaron Yoo plays an intimidating villain as Pockets, a man who wants the teapot for unknown reasons and also fights with his hands in his pockets.

Constance Wu’s role as Din’s mom may not seem prominent at first, but definitely adds to the film. Her role as the overbearing mother is definitely one of the funnier aspects of the movie and had me laughing every time she was on screen, yelling out orders, or smacking her son with a rolled-up newspaper. And when it comes to the dramatic moments between mother and son, Wu’s voice really makes Mrs. Wong seem less overbearing and more of a worried mother in the best way. Her voice fits perfectly for her role.

‘Wish Dragon’ – The Beauty of Animation

All of these dramatic and comedic moments would never land as well as they do if it were not for the beautiful animation seen on-screen. Sony has really stepped up its animation level since the days of its first film, ‘Open Season’, and with Sony and Dreamworks, the quality of animated non-Disney films is looking better and better. Watching Long swirl through the sky looks majestic, and the way the characters move feels incredibly smooth. When Din fights off bad guys, or when Din and Lina run from Pockets and his henchmen, their movement always feels loose, in a fun way that only an animated film could achieve. Everything from the color of the world to the over-emphasized facial expressions (Long definitely takes the cake in that department), the animation in ‘Wish Dragon’ is incredible.

It’s great to see this enjoyable type of animation applied to such a fun story. The plot of ‘Wish Dragon’ is pretty by the numbers and predictable, but there were enough twists and turns that still make it original and worth a watch. The story is based on an old Chinese tale that’s updated to modern times. To many people, the plot might seem similar to the well-known Disney film ‘Aladdin’, with the similarities of an optimistic man with little material things using 3 wishes from a magic being to get the attention of a woman who has money and fame.

But despite those similarities, this film shines with its differences. Long’s cynical attitude is different and refreshing, and the harsh lessons Din learns about class differences in society are a great lesson that really makes ‘Wish Dragon’ feel different from anything else. Din and Lina are both similar in their own respective ways, trapped by their societal standings and wanting to escape, even if they are both in very different classes of wealth and influence. Even with the similarities, this story is still told in a new and interesting way.

In my eyes, this film is definitely worth checking out on Netflix. It tells a fun story, the voice acting is great, and the animation is absolutely beautiful. What more could you ask for? It’s also important to note that the entire cast is made up of Asian actors, something that definitely adds authenticity to the film and is something worth celebrating. Overall, ‘Wish Dragon’ is a fun family-friendly adventure that is worth sitting down and watching with the kids, or if you’re looking for something new to watch. You’ll definitely leave this film with a smile on your face.

‘Wish Dragon’ is available now, only on Netflix.