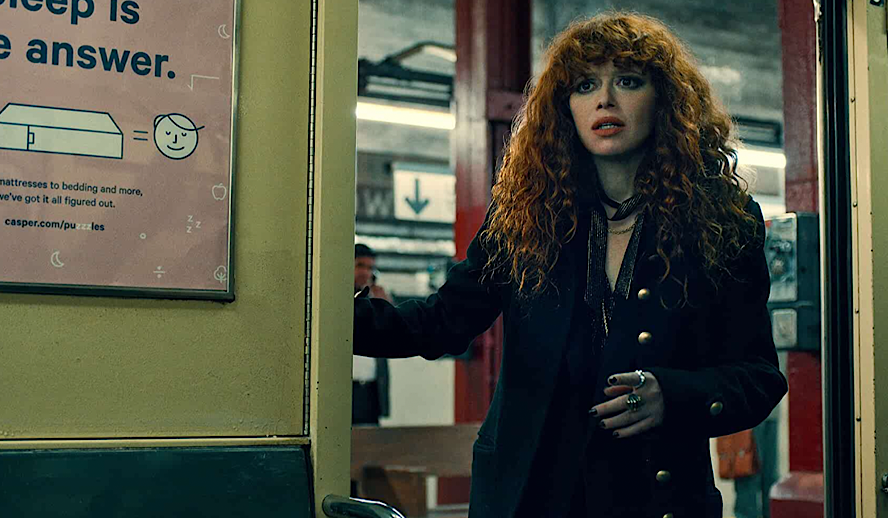 After spending her 36th birthday in a loop of death with a perfect stranger, Nadia (portrayed by Natasha Lyonne) wants nothing more than a calm 40th birthday with her loved ones. However, nothing can ever be that simple for her. From growing up in an incredibly unstable home, to becoming an incredibly unstable adult – there is nothing in this lifetime (or any other, for that matter) that could make her life perfectly average. From one extreme to another, ‘Russian Doll’ tosses the viewer into a wormhole with little hope of emerging the same.

Episode one of season two, ‘Nowhen’, presents us with Nadia’s challenge for this season. That being to right her mother’s wrongs. Or at least that’s what she thinks. After spending the first season of the show in a time loop with the singular purpose of saving a stranger’s life, Nadia is sure that this new wormhole must have a purpose as well.

After getting on the subway, Nadia finds herself on platform 1982. She is led to a bar, when she finds a matchbook with a note in her pocket. Here she meets a man who seems like yet another stranger to her, however, it’s evident that he knows her. Quickly escaping the bar, the two end up at an apartment where the mystery man, by the name of Chez (portrayed by Sharlto Copley), steals a duffle bag.

Shortly, Nadia gets back on the subway train and is sent back to 2022, when she discovers the key to her 1982 identity. Completely disoriented by her discovery, she rushes to the hospital to see her godmother who had raised her as a surrogate daughter from the day she was born, Ruthie (portrayed by Elizabeth Ashley). After asking Ruthie some questions about her mother’s past, Nadia is blown away by the realization that the duffle bag stolen by Chez could very well be the key to her family’s misfortunes.

Rushing back to the past, Nadia has high hopes of restoring what went wrong in order to set everything right and give herself a proper chance at life in the process. Though as it soon turns out, things were never as simple as they seemed.

In season two ‘Russian Doll’ takes an interesting turn from the first season’s objective to dissect human morality towards attempting to understand family trauma from every perspective. Yes, you heard that right, every perspective. Kids, parents, grandparents, close family friends, lovers, even the corner store clerk. This season is incredibly packed with just about any take on Nadia’s family history. So now we’ve gone to the past, what’s next?

Nadia’s perspective on her family’s past was built through tunnel vision, as with most kids that experienced childhood trauma. You focus on your own survival and as you grow up, you never realize that you can drop that perspective. Across season two, Nadia comes to understand that what she saw growing up could not amount to even a fraction of the full picture. Now that’s not a remotely easy realization to have, and the path to acquiring it was not simple even by a hair.

Throughout the season, the subway train will take Nadia to the very beginning of her family trauma. However, no matter how hard she tries, nothing seems to go the way she intends. What now?

Every time travel film or television show will tell you that you should not change a single thing, no matter what. Well, that life lesson seems to have gone right over Nadia’s head. As she attempts to fix everything that went wrong for her mother while she was still pregnant, failing over and over again, Nadia’s understanding of reality fundamentally shifts.

Filled with sex, drugs, and rock n’ roll, the past throws Nadia around like a rag doll. There is no end to what she is willing to do in order to fix her life at its core. But what can you really do when the past isn’t willing to cooperate? When compromises aren’t enough, Nadia will learn that her mission was doomed to failure.

At its core, ‘Russian Doll’ season two is a tale that helps us understand that the course our lives have taken is not our fault. Sometimes things happen because they happen, and there is no way to fix them after they do. The “what-if” factor of life tortures each and every person on this earth, ‘Russian Doll’ attempts to tell its audience that we cannot control the course our lives take, even if we can see into the future. The concept of time is just too complicated to be controlled. This unique take on what makes time tick could be dissected into a thousand pieces, watched on loop, and boiled down to concrete truths. But one purpose remains – you should have never been made to feel as if the fate of your whole bloodline rests on your shoulders. The only thing that you can control when it comes to generational trauma is whether or not the cycle ends with you.

Whether or not you can personally relate to the core ideas of ‘Russian Doll’ season two, there is not a single chance that this show won’t change at least a fraction of your perspectives. With brilliant editing, cinematography, and storytelling, ‘Russian Doll’ is incredibly effective at delivering its message. So learn from the past if you wish, but don’t feel responsible to change it. As much as this season remains a remarkable lesson in storytelling for filmmakers, it is even more so remarkable in the simplicity of its philosophy. Almost as if the screen is telling you “hey, you tried, and that’s all you could’ve ever done”. By no means does it say “just go with the flow”, but as Nadia once said, “when life fucks you, let it”.