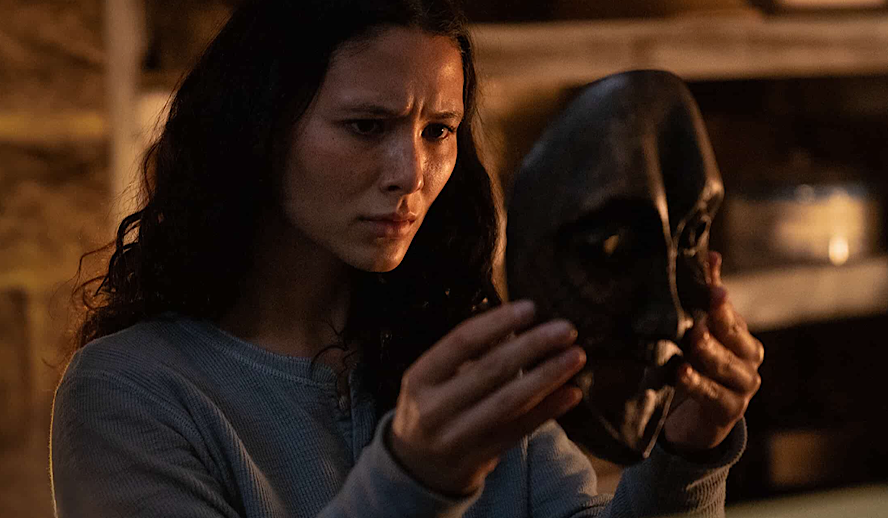 Exciting, yet deeply unsettling – ‘Umma’ is worth the trip to the theater. Dive into the story of Amanda (portrayed by Sandra Oh) and her beloved daughter, Chris (portrayed by Fivel Stewart). Together, they run a family-owned and operated honey business on a small farm miles away from town. Most of the locals consider them odd, for one thing, because they live without electricity. That means no cell phones, no cars, and even no lights. Some may consider that old school, especially for a movie set in the late 2010s to early 2020s. However, for Amanda, the lack of electricity in her home is very near life-saving. Though eventually, when Amanda’s uncle brings her news of her mother’s passing, the lack of electricity is not able to suffice to keep Amanda safe.

The opening scene lets the audience in on the secrets of Amanda’s abusive childhood. We see as she helplessly pounds at a closet door, begging her Umma (meaning mother) to let her out. She begs for the door to be unlocked but instead, her mother gets even angrier. Electric flashes are shown on the screen along with the sound of desperate screams and it is implied that Amanda’s mother hurt her somehow using electricity.

We watch as Amanda struggles with nightmares and flashbacks, which are very common in severe PTSD (post-traumatic stress disorder). The only thing that ever brings her back right away is her daughter – Chrissy. For 17 years Chris was raised in a home with no electricity, even people who are simply passing through the farm are required to turn off their phones and leave them in their cars. For this reason, Chris has no friends. The kids her age in town seem to hold negative biases towards her due to her “strange” lifestyle. Early in her life, she begged to be homeschooled because of the bullying she faced in the public school system. For all of these reasons combined, her mother is her only friend and in turn, she is her mother’s. That sort of codependent bond puts them both in a position where they are afraid to be apart, causing much emotional turmoil when Amanda discovers that Chrissy is thinking about applying to college.

When Amanda was young, she had attempted to run away from home, which called upon her mother’s wrath. How could her own daughter betray her like this? After everything that they went through together, how could she do such a thing? Of course, these questions are easily answered for an outside observer – the abuse was too much. But for Umma, this was a hurtful mystery. She decided to show Amanda how much she hurt her emotionally through physical pain.

When Amanda became pregnant she swore to herself that she would never become like her mother. As Chrissy grew up, Amanda made sure to tend to her every need and want. From homeschooling her, to starting a whole honey business after Chrissy came home one day with a book on beekeeping. Though despite Chrissy’s social issues that would normally arouse concern in a parent, Amanda enjoyed being Chrissy’s only friend. At one point stating that all they needed was each other.

Amanda was desperate to keep Chrissy around because she thought she was protecting her. In reality, she needed Chrissy around to keep her own horrors at bay. From rushing to her side in the night when Amanda was frightened by the lightning, to waking her from delusional states, Chrissy was Amanda’s lifeline.

It came as a shock to Amanda to learn that Chrissy had acquired a college application with the intent to fill it out. Though she wasn’t angry, she was frightened. What would become of her if she no longer had her lifeline? It almost seemed like Chrissy was running away, and Amanda had enough of her own trauma with the concept of escape to spiral into her own memories of wishing for freedom. These memories made her believe that Chrissy wished for freedom too when she began that college application, when in reality she simply wanted to see what the world had to offer.

The audience witnesses as Amanda begins to go down a rabbit hole of suspicion and fear regarding Chrissy’s wish to move on from the farm. Eventually, the rabbit hole leads to what can be interpreted as delusion or haunting. The film leaves this up to interpretation, seeing as it is never explicitly stated that the farm is hosting a spirit, or that Amanda had reached a breaking point in her psyche. It is implied that Umma’s spirit is pushing Amanda to a breakdown, so perhaps it is a little bit of both, however, there is enough evidence in the film to suggest that Umma’s spirit is only in Amanda’s mind.

Featuring cinematography by Matt Flannery, ‘Umma’ emphasizes darker scenes. The utilization of darkness in the absence of electricity on the farm is done well and adds an element of suspense to the masterful performance of the cast. Written and directed by Iris K. Shim (known for directing ‘The House of Suh’), who is a Korean-American filmmaker, ‘Umma’ involves Korean culture and tradition as well as Korean family roles. The themes of honor and obedience are very prominent, to the point of creating toxicity in the home. These themes are well-executed, showing the director’s and cast’s experience with such expectations in their own families and homes. It is rare to see culture-sensitive trauma being portrayed in an accurate and believable manner, however, ‘Umma’ makes it a point to ensure that the generational and cultural trauma that it takes on is provided with respect and a sensitive approach.

There is a lot to unpack and experience when visiting the theaters to view ‘Umma’. This film certainly makes you question your own understanding of generational trauma and certain cultural beliefs. The horror is very secondary to the plot. Instead, the film focuses on showing what it’s like to be trapped in your own family. So perhaps, instead of walking out of the theater frightened, one can leave with a little more empathy towards those with fractured homes. If you’re looking for a psychological thriller with elements of cultural trauma, give ‘Umma’ a watch! Playing exclusively in theaters starting March 18th.