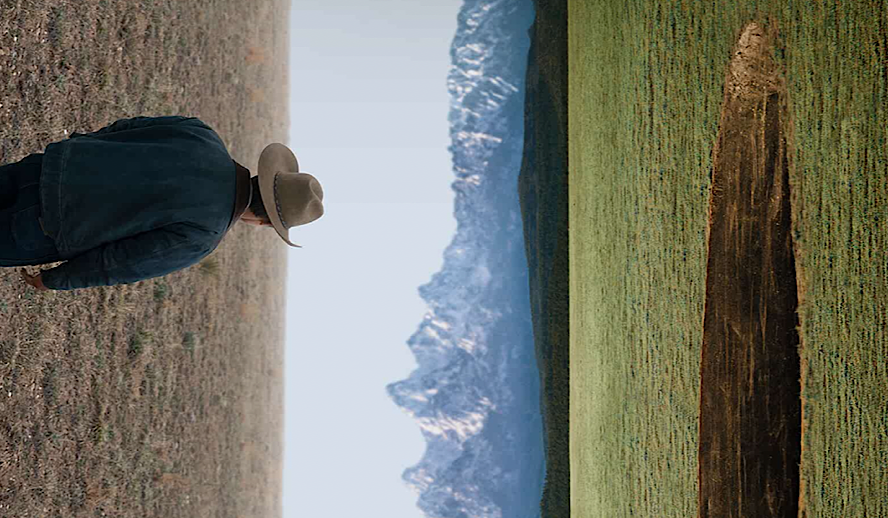 I first saw the trailer for Amazon’s ‘Outer Range’ about a month ago, I’d say. It was refreshing to see Josh Brolin again, and not covered with pleated purple CGI. The last outing I had seen of his was 2021’s ‘Dune,’ a film that received widespread acclaim from critics and casual audiences alike. However, I’m also a fan of TV. As a film student and screenwriter-hopeful, TV is actually where my interests lie, both in terms of my own craft and personal enjoyment. But, many actors, such as Liam Neeson (who recently admitted this in an interview), tend to look down on television as just not quite as glamorous as the silver screen.

So, seeing a big name movie star like Brolin, whose career has been seeing a swell recently, make a pivot towards TV (streaming, to be specific), had me very excited. The specific trailer I viewed also included a scene discussing a “void” between “us” (humans) and God, which not only relates directly to the plot, but I hope also teases the comings of wider, universal concepts of creation and spirituality and faith, things that also interest me as a creator and viewer. I’m also a major sci-fi fan, with many of my own personal projects tending more towards that genre than anything else. So, needless to say, I began eagerly awaiting April 15th.

‘Outer Range’: Two for one

When April 15th finally arrived, and this college student finally made his way back to his TV, washed up from class, I discovered (much to my joy) there were actually not one – but two episodes of ‘Outer Range’ idling by, waiting for me. Now, I was glad to get more treats from Mr. Bezos than expected, but I will admit, I was cautious at first. I worried that the willingness to premiere with more than just one episode meant the initial premiere wouldn’t have enough gusto to keep me wanting more, nothing interesting or enticing, which is exactly what you want for a first episode. But, thankfully, I will say, the first installment did not have me bored, nor did it feel in any way stagnant. We are introduced right away to the Abbott family, of which Royal (played by Josh Brolin) is the patriarch, despite the ranch on which they live actually being his wife’s ancestral land.

We are also introduced to a mystery. It appears the wife of one of Royal’s sons, Perry (played by Tom Pelphrey of Netflix’s ‘Ozark’), has gone missing just before the beginning of the episode. Then, the episode sees a murder take place, which the sweet rancher family, who we also see gather around the dinner table to say grace, helps to cover up. They are also engaged in a rivalry with a neighboring ranch, whose patriarch, played by Will Patton from ‘Swamp Thing,’ wants to acquire part of their land, going so far as to bribe local officials. And then, in the episode’s incredibly tense final moments, it offers one of the best twists I never expected, which catapults us directly into the next chapter. The twist also occurs in a blink-and-you’ll-miss-it moment, in the episode’s closing seconds.

Josh Brolin’s career has seen a massive resurgence in recent years. I would argue he is now, again, a household name. But, before he was snapping half of the universe out of existence as the Mad Titan, Thanos, many die-hard ‘80s fans will remember him from ‘The Goonies.’ ‘The Goonies,’ which was released in 1985 (the same year as ‘The Breakfast Club,’ ‘St. Elmo’s Fire,’ and ‘Back to the Future’), saw a rag-tag group of adventurous, yet mischievous kids’ antics lead them to stumble upon the lost treasure of pirate captain, One-Eyed Willy. In the film, Brolin played the older brother to Sean Astin’s (from ‘Stranger Things’) Mikey, Brand. Brand was sort of the rough-and-tough masculine authority of the group of kids, and was instructed to protect his younger brother.

‘The Goonies,’ it is needless to say, went on to be a wildly popular cult classic of the era, whose influence can even be seen today with the upcoming season four of Netflix’s ‘Stranger Things.’ And, fast-forwarding to the present day, everyone recognizes Josh Brolin’s deep, gruff voice as that of MCU big baddie, Thanos, the overarching antagonist of the Infinity Saga. While Brolin was not the actor to initially portray the character in his first appearance on-screen with 2012’s ‘The Avengers,’ he did go on to with ‘Guardians of the Galaxy,’ ‘Avengers: Age of Ultron,’ ‘Avengers: Infinity War,’ and ‘Avengers: Endgame.’ And, of course, following (spoiler alert) Thanos’s dusting in ‘Avengers: Endgame,’ Brolin went on to appear in the ‘Dune’ franchise as Gurney Halleck, a trainer of Timothée Chalamet’s Paul Atreides. Moving to TV is an interesting move for Brolin, especially now.

Hopefully, his attachment to a project like this, with a streaming service of this caliber, is a sign of its excellence as a story, we’ll see. For now, though, Brolin leads the first two episodes of the series (and the series in total), as the protagonist, Royal Abbott, a rancher in Wyoming loyal to his family, and struggling with the distance between him and his God.

Speaking of Wyoming, the show’s setting and visual imagery are absolutely stunning. For any readers who saw Netflix’s ‘The Ranch,’ some country bar scenes almost remind you of that, but with much more attention to craft and artistic skill, and clearly also a bigger budget. That being said, the natural scenery is beautiful as well, with stunning mountain ranges surrounding the wide, sprawling Abbott family pastures. There’s also a recurring motif of an eerie bison with arrows in its side, wandering around the Abbott property, promising something more to come, I’m sure. This kind of…old West style and aesthetic is refreshing only in the sense that this series promises to be of the sci-fi genre. Not often, with the exception of the failed 2011 film, ‘Cowboys & Aliens,’ starring Daniel Craig and Harrison Ford, do you get sci-fi fused with western.

Recently, Disney+’s ‘The Book of Boba Fett’ sort of had that going on, with its shootouts in the desert towns of Tatooine, and its live-action introduction of gunslinger Cad Bane. However, that is in quite a different realm of its own when it comes to sci-fi, literally in a galaxy far away with everyone being a blue or orange alien. ‘Outer Range,’ however, takes place here on Earth, and boy, does it depict Earth beautifully. In the trailers and first two episodes, there is also the deal of the mystery hole. A strange, perfectly circular, seemingly-endless black hole has appeared in the Abbott family’s West pasture, and this offers a surprisingly strong stunning visual. There’s the long, flat, perfect grassy field, the picturesque ranges in the distance, and in the center of the ground, this eerily perfect black cutout. With these first two episodes, this show promises to be at the very least, an interesting one. The next episode comes out April 22nd, and every following Friday.