Dawn of Orville Peck: Why You Should be Hype for the Queer Country Cowboy’s Sophomore Album Bronco 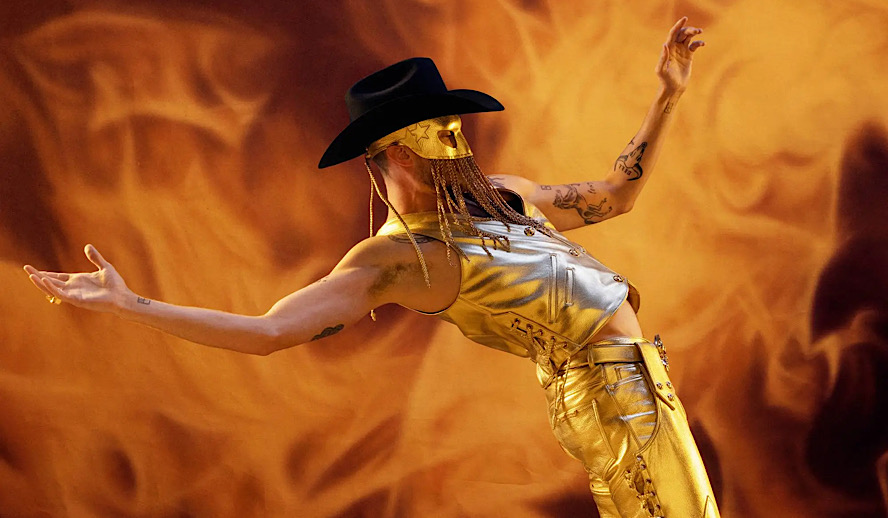 The Show Pony. The masked cowboy. The queer steer. Country singer Orville Peck has been redefining the heteronormative genre with his flair for fashion, hypnotic vocals, and superb showmanship. And now, he’s ramping us all up for his sophomore album Bronco, set to be released April 8th, 2022.

The Elephant In the Room: Let’s Talk About the Mask

Although there have been hundreds of speculations, Peck has never publicly shared his identity: The 30-some-odd-year-old has only been seen wearing different variations of a fringed mask that leaves audiences dazzled by the mystery. When asked about this choice for anonymity, Peck told GQ, “The only reason I don’t talk about it in depth is not because I want to dodge any questions, but because I want people to have their own take on it… I don’t want to lay it out and pin it down. I just don’t think that’s important.”

But the mask holds so many layers of value. Interestingly enough, Peck has found the mask to be a hindrance at times. In an interview with Alternative Press, a magazine he grew up admiring, he revealed that his disguise adds flair and authenticity to his life that is often misunderstood as a cry for privacy, “[The mask] actually makes it harder to go onstage and be sincere because it comes with a misconception from people that maybe it is a gimmick, or it means that what I’m doing is a joke or a parody… This is the amplification of who I am, deep inside my core, and this is what it looks like.” So, similar to the eccentric fashion of bands like KIϟϟ or the costumes of Elton John, the mask serves multiple purposes.

In an industry where the selling point is often “me, me, me”, Peck has joined the elite group of masked musicians whose talent surpasses their identity and puts the focus on the music rather than on themselves (i.e. Sia, Marshmello, Gorillaz, and Daft Punk), while miraculously singing about such personal things. It’s true, we’re all left waiting and wondering, but why waste the time guessing when I can spend the time enjoying the art? The mystery is worth the moments. (Side note – the mask disguise has given us some incredible fashion moments, has inspired hundreds of recreations, and has the potential to have its own line of COVID masks.)

When it comes to identity, Peck is an out, gay man. And it’s rare to type the words “gay country singer” in that order. Before writing this article, the only queer Country performers I knew of were Orville Peck, Trixie Mattel, and Lil Nas X, and X hasn’t made a Country song since his record-breaking track with Billy Ray Cyrus “Old Town Road” (And it won him a CMA and he did reach 19 on Billboard’s Hot Country chart). So, needless to say, my exposure to queer Country music has been very limited.

When I did a quick Google search, I learned about the world of openly gay Country artists, which includes the band Lavender Country, LGBTQ+ activist Chely Wright, “I Want My Goodbye Back” singer Ty Herndon, Glee Project alum Harper Grae, and more. The first openly gay Country singer to be signed to a major label, however, is T.J. Osborne of Brothers Osborne.

According to his interview with GQ, Peck believes that artists like himself, Lil Nas X, Brandi Carlile, and Yola “are giving closeted Country artists the confidence to write and perform in the genre.” Slowly but surely, there is a revolution happening in the world of music. “Sadly there hasn’t been an abundance of [unconventional] voices in Country,” Peck shared, “I mean, they’ve always been there, minorities are an integral part of cowboy culture, so if anybody feels like they’re not, they very much are.”

And many people around the world have begun to embrace the minority side of country music. From his freshman album Show Pony hitting number five on Billboard’s Heat Seekers to Lady Gaga commissioning him to cover her hit song “Born This Way”, to the straight, middle-aged White men who make up part of his fan base, Peck is proving that queer Country music is universal.

Although queer Country is considered an alternative genre, Peck doesn’t view himself as an alt artist. “I consider myself a Country musician, but I definitely see people framing me as alternative by today’s standards,” he told Alternative Press, “[My music] pulls references from all kinds of genres, so maybe that confuses people. The irony is that I make music that sounds similar to what I would consider ‘classic Country’ more than what [popular] Country music sounds like today.”

Like the aforementioned artists Lil Nas X and Yola, Peck’s influences are quite eclectic. He credits everyone from Dolly Parton to punk rock band The Screamers as sources of inspiration. “They all wore costumes. But they were singing about deeply personal, edgy things,” Peck told Alt Press,” …very theatrical but still writing very evocative, heartfelt music. That is inherent in Country music… I think the key is to be as sincere as possible…”

And said sincerity is also inherent in his newest singles from his album Bronco. In a uniquely Orville Peck fashion, singles from the album have been released in chapters, rather than as individual releases. Each chapter contains four songs that will appear on the full-length album on April 8th (a date that cannot come soon enough). In Chapter 1, Peck gave us the instant hit “C’mon Baby, Cry”, accompanied by a heartfelt yet campy music video that let us get closer to the man behind the fashionable mask.

Now, for Chapter 2, we are gifted with four new songs, including the hauntingly beautiful ballad “The Curse of the Blackened Eye”, featuring our second Bronco music video. In this delightfully eerie visual take on the song – directed by Austin Peters – ‘Walking Dead’ actor Norman Reedus (the king of music video features) plays Peck’s ex-lover who haunts him day and night in the form of a zombie. Thankfully, the rotting Reedus finally disappears once Peck meets someone new.

This video lets us into such an intimate part of Peck’s life, a fact he emphasized in a statement: “The songs on Bronco‘s second chapter explore some of the most vulnerable places I’ve ever gone to with my music…I sing about home, escape, longing, resentment… This chapter, lyrically, has some of my favorite songs on the album.” So far, it has some of my favorites too. Now, we just wait for Chapter 3.

It Will be Worth the Wait!

To many people’s surprise, I am a fan of Country music. I grew up with a grandmother who loves Charley Pride and Dolly Parton, a mom who loves bluegrass, and a dad who enjoys everything in between. So once I learned about Orville Peck when he was featured on an episode of ‘Dragula’, I knew I had found a new source of joy.

Peck’s journey and tenacity inspire me as an artist. For years he sent his music to producers and was constantly told “no”. Now, he is celebrated for his theatricality, his embracement of himself, has collaborated with Grammy-winning artists and is taking on the world tour after tour and song after song. I eagerly await the release of Bronco and will be streaming these first two chapters on Spotify until April 8th. And I highly recommend you do the same!