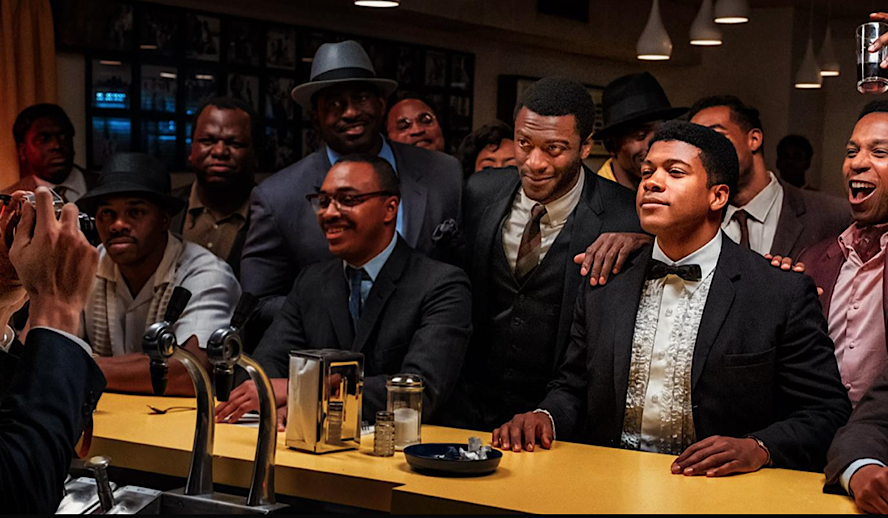 Photo: ‘One Night in Miami’/Amazon Studios

The film ‘One Night in Miami,’ out in limited theatres now and releasing on Amazon Prime Video on January 15th, is a feat of artistic and imaginative genius. A fictional account of a real 1964 night in Miami where public figures Malcolm X, iconic vocalist Sam Cook, football legend Jim Brown, and leading heavyweight champion of the 20th century Cassius Clay (more famously known as Muhammad Ali), all met in person to celebrate the record-holding fighter’s title win over Sonny Liston.

Although the film’s dialog doesn’t come from recorded interviews, speeches, or autobiographies like many biopics, the film is special because of its imaginative liberty. As we anxiously await the film’s wide-scale release, here are three reasons why ‘One Night in Miami’ is an absolute must-see.

A Creative Match Made in Heaven

It’s always fantastic seeing a Black story told by a Black writer and a Black director. But what’s even more remarkable is when the writer-director duo is one that’s as strong as what ‘One Night in Miami’ brings to the table. Regina King makes her directorial debut in film with this project. Seeing Black directors behind Black stories can sometimes be a rarity, but what’s even rarer is seeing a Black woman behind these tales.

Hollywood recently made history with representational efforts, increasing the number of female directors in feature films. Indiewire’s Kate Erbland reports that “for the first time in over a decade, both the number and percentage of women working as directors on some of Hollywood’s biggest feature films have increased.”

It’s elating to see that Regina King is still out here making moves after over twenty years of doing significant work in the business. For an interview with Variety, when asked about her reasoning behind joining the project, King said, “as a mother, as a niece, as a daughter of a Black man, I just felt like I wanted to tell a story that every Black man that I know and love can see a part of himself in that story.”

Many audiences will know King from her roles in ‘Boyz n the Hood,’ ‘Poetic Justice,’ ‘Watchmen,’ and for her role in ‘If Beale Street Could Talk’ for which she took home both the 2019 Academy Award and Golden Globe Award for Best Supporting Actress.

King has already made history with her current project, being the first African American woman to have her film selected at the Venice Film Festival. If she were to be Oscar Nominated, she’d continue to make headway for an industry that often silences Black creatives. In the Oscars 92 year history, a nomination for Regina King would make history as the first Black woman nominated for Best Director.

This film was a genius pick for King’s directorial debut, and that’s primarily because of the intimate yet bold writing crafted by Kemp Powers. Powers might be more recently known for his contribution to Pixar’s ‘Soul,’ which hit Disney+ over the holidays. Receiving generally glowing reviews, Powers has added his name to the hat of exceptional Hollywood writers in one fell swoop.

Adapting his stage play ‘One Night in Miami’ which he published in 2013, Powers is a newcomer to Hollywood’s award season. In the past, he’s written for ‘Star Trek: Discovery’ on CBS, but with both ‘Soul’ and now ‘One Night in Miami,’ Powers has made an enormous splash in the industry.

While this dynamic duo is sure to find renowned success this awards season, a lot of voter’s eyes will be on ‘One Night in Miami’s’ stellar cast.

‘One Night in Miami’ – A Brilliant Cast

‘One Night in Miami’s’ trailer alone should be an indication of how magnificent this cast is, but just in case you’re unfamiliar with these actors, let’s dive into their accomplishments and why they look so familiar.

Coming in top-billed, playing Malcolm X is Kingsley Ben-Adir. If you’ve seen ‘The OA,’ Hulu’s 2020 rendition of ‘High Fidelity,’ ‘The Comey Rule’ (as Barack Obama), or even Stephen Knights ‘Peaky Blinders,’ then you’ve seen the genius that is Kingsley Ben-Adir. A graduate of the prestigious Guildhall School of Music and Drama in London, the actor is classically trained in theatre, giving him the tools necessary to propel Malcolm’s character to new heights.

Next on the cast list is Eli Goree playing Cassius Clay. Fans may know him from the Netflix original hit series ‘Riverdale,’ ‘Glow,’ or for his award-winning depiction of Dave Albritton in the film ‘Race.’ Goree is a Canadian actor that’s been acting for just about all of his life. At the age of six, he was featured in the Canadian version of ‘Sesame Street’ ‘Sesame Park.’ Goree’s captivating portrayal of Cassius Clay will be one that critics compare to Will Smith’s portrayal of the same hero for years to come.

Aldis Hodge is next up on the cast list, playing Pro Football Hall of Famer Jim Brown. Hodge is one of Hollywood’s secret weapons, one of those performers that shows up, does brilliant work, and disappears again back to the shadows of the limelight. Hodge has illustrious experience in just about every performance medium, and his skillset is made apparent in his most recent film.

And finally, possibly the most known actor in the cast, ‘Hamilton’ star Leslie Odom Jr. takes the stage as the legendary musician Sam Cooke. Since his Tony Award-Winning debut as Aaron Burr in the worldwide musical hit, the actor has become quite busy, dabbling in everything from voice acting (‘We Bare Bears’), to starring in feature films like his role in ‘Harriet,’ playing opposite the legendary Cynthia Erivo. In ‘One Night in Miami,’ he plays musical icon Sam Cooke, and for good reason, as Odom Jr. is one of this industry’s brightest shining stars.

The movie also features the likes of Tony-nominated Joaquina Kalukango (Slave Play), for her role as Betty Shabaz in the film. Jeremy Pope, Lance Reddick, and Christain Magby also make their respective appearances. It’ll be interesting to see how all of these players of varying recognition in the industry will work together to tell the story.

One thing is for sure though, the film certainly will be able to hold its own acting-wise, but the terrific team behind ‘One Night in Miami’ is not the only reason why it is a must-see. After watching the film, your perspective of all of these very well known historical figures will forever be altered.

One of America’s many crude acts has been its villainization of the Black community’s greatest heroes. Malcolm X’s branding as a militant tyrant is a disgraceful inaccuracy for a man who was instrumental in leading Black people to empowerment. In ‘One Night in Miami’, we get a much closer look at some of America’s most commercialized and commodified figures.

It’s essential that Black stories are seen from a variety of angles, even more so than white stories, because of America’s habit of watering down, stealing, and erasing Black stories from the American narrative.

While many movies have been made about the figures featured in ‘One Night in Miami,’ it’s vital that we continue their legacy by expanding their humanity. They are more than the famous quotes we use from them or the art we consume and commercialize.

These heroes stories are filled with nuance, depth, weighty opinions, and political stances. They are more than the tee-shirts or coffee mugs we plaster them on, and they’re often not as digestible as we like to believe.

As we move into 2021, let’s continue uplifting Black artistry and making more space for our voices. What could be a more perfect way to start than watching ‘One night in Miami,’ showing in select theatres now, and streaming on Amazon Video starting January 15, 2021.