Must-Watch: ‘Sylvie’s Love’ is the Very Soul of Music 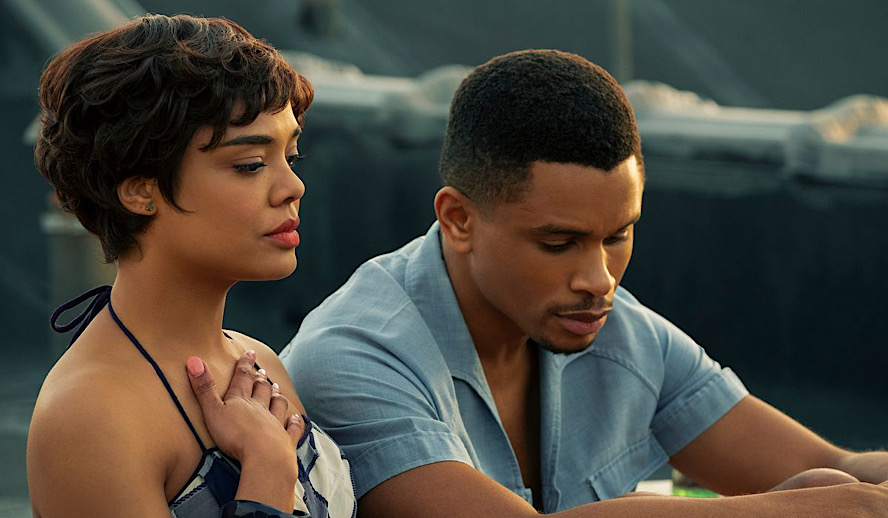 The most emphatic advice one can give to a filmmaker in our current day and age is simple: Don’t try and reinvent the wheel. Everything has been said and done before, “the last original thought was written by Shakespeare,” so why try and act like something is brand new? Write what you know about, write it passionately, and that’s the story that Hollywood audiences will give their resounding applause to.

All of this advice is true, to a certain extent. Remakes and unnecessary sequels flood the Cinematic market, leaving a bad taste in everyone’s mouth and prompting many to believe that whatever golden age of Hollywood has managed to persist for so long has finally died. However, I believe there is one very important reason to tell another story that one might already be familiar with- diversity. ‘Sylvie’s Love’, directed by Black filmmaker and writer Eugene Ashe, is all about that feeling of an endless summer day, a jazz record spinning lazily on a record player, and a love affair that feels more like coming home than the beginning of something new.

The Music of ‘Sylvie’s Love’

Music is the common thread that ties ‘Sylvie’s Love’ together. Robert Halloway (Nnamdi Asomugha) is an up and coming saxophone player in the small-time Dickie Brewster Jazz Quartet when he comes upon the beautiful Sylvie Parker (Tessa Thompson) in her father’s record store, and they spend their brief moments together luxuriating in music of all sorts, most popularly Bill Haley & His Comets’ ‘See You Later, Alligator’.

There is a pleasant diversity in the styles of music featured within the film, straying heavily from the all-jazz soundtrack that I was expecting at first watch. The ruminating nostalgia that one feels when that classic, upbeat swing music truly marks the early 1950s and gives the viewer a cozy, feel-good memory of days that were long ago. Fabrice Lecomte is due a great deal of credit for their work in piecing together that perfect blend of existing tunes and brand-new scoring that come together in consummate harmony.

Jazz in the Film Industry

Jazz has been making a resurgence within the film industry for quite some while now, arguably first with the release of Damien Chazelle’s ‘Whiplash’ and carried strongly by his dynamite 2016 release, ‘La La Land’. ‘Sylvie’s Love’ is the remedy to the many questions that were raised with the overwhelming popularity of ‘La La Land’- Why is it that a white man is tasked with the revival of a historically Black genre of music? Why is Ryan Gosling the savior of jazz when he has a large group of Black men to mentor him along the way?

While ‘Sylvie’s Love’ is not as witty as ‘La La Land’, nor is the film trying to be, it carries the same enchanting visual beauty. While most view Chazelle’s films as a representation for those with dreams and the limits they would push to achieve them, Eugene Ashe places a very different dream at the forefront of this movie; Women, specifically Black women, and all of their unsung ambitions of the mid-century. The titular character Sylvie spends the length of the film making sacrifices for both love and her aspiration of working in television, and it felt refreshingly human to watch Sylvie’s priorities constantly evolve as she grew older. While some admit that the ending felt lackluster after the time and relationships we had developed with the characters, I believe that it told an honest truth about life and the things we must sacrifice for happiness. This film is about Black women and their ambition, disguised as the ever-classic jazz-tuned romance.

This is, undeniably, one of the most handsome casts to date. Tessa Thompson and Nnamdi Asomugha begin the film with a strong-armed presence, and their chemistry is more than palpable. Their Trans-Atlantic accents add a charming touch of realism that would be sorely missed if Eugene Ashe had chosen to go without. Thompson gives a gently powerful performance as we watch Sylvie transform from a young woman to a powerful executive, and her grace and poise are entirely praise-worthy. Asomugha, one of Variety’s Breakout Stars of 2017, has taken the less-than-traditional road to stardom with his beginnings as an NFL football player for over eleven years. Thankfully, he has made the switch to acting and takes an emotionally powerful turn with his performance as Robert Halloway, who revives a certain sensitivity missing in many male leads today.

Aja Naomi King is an absolute doll in her role as Mona Lisa (“Like the painting,” her character coos in the film), Sylvie’s bright and cheerful cousin that serves as an emotional rock over Sylvie’s bumps in the road. She gives a charming, smile-because-you-can’t-help-it performance that positively lights up the screen. Ryan Michelle Bathe is another surprising standout as the producer of a popular cooking show, who hires Sylvie on a chance and a whim. With delightfully, laugh-out-loud humor with an impressive screen presence, she will command your attention with an effortless charm.

Sometimes the Wheel Can Be Reinvented

So, yes. There is always the danger that you are overusing a plotline that too many have seen before, but ‘Sylvie’s Love’ is proof that if done with diverse representation in mind, the wheel doesn’t always mind being reinvented. Sometimes, you might come up with a more functional version of the wheel, or more stylistically beautiful, or just plain better. This film is like indulging yourself in fine, beautiful things- the impeccably smart costuming from Phoenix Mellow, Thompson, and Asomugha’s chemistry to make your toes curl, or the downright stunning cinematography from Declan Quinn. We all deserve a well-earned moment of relaxation, and ‘Sylvie’s Love’ is definitely one of the films that you can hit play on while knowing that you can hold on to that easy-going state of mind. Now available on Amazon Prime Video, ‘Sylvie’s Love’ is one of the last (and best!) gifts the 2020 holiday season has managed to give us.