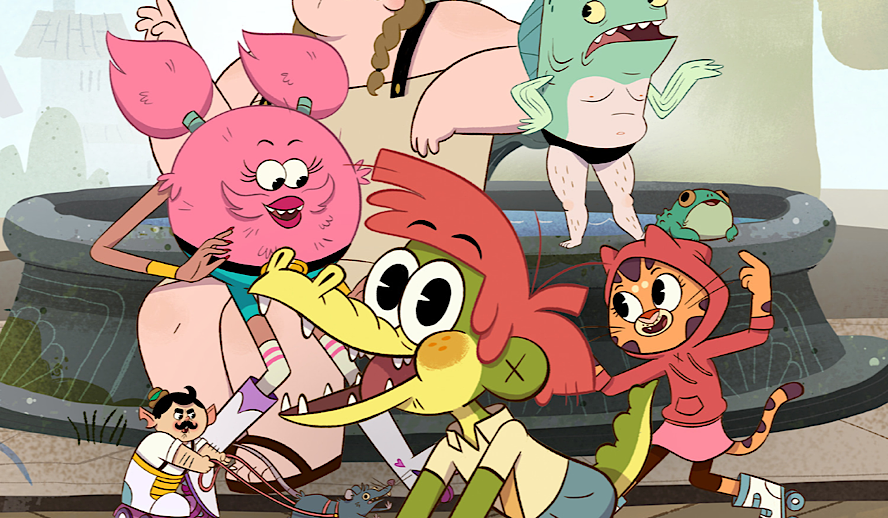 Be prepared before watching ‘Arlo’, as the level of cuteness presented in the series might be too much for the faint-hearted. Creator Ryan Crego has brought to Netflix the single most adorable thing caught on camera since the creation of Youtube cat videos, full of anthropomorphic characters that show more humanity than what exists in our world, and musical numbers that you can’t help but sing along with. What’s strange about ‘Arlo’ is just how much it looks geared towards children, but there’s an occasional level of sophistication and nuance to it that aims to help nurture its youngest core audience. Older viewers, however, may still appreciate the show for what it is and what it’s trying to do. I’m not sure if it’s because I’m a kid at heart, or if I simply underestimated Arlo’s quality, but I found myself enjoying this animated series a lot more than I thought I would, and perhaps Netflix subscribers would too if they gave it a chance.

‘I Heart Arlo’ Is Endearing Without Being Pandering

‘I Heart Arlo’ is actually based on the recent Netflix animated film, ‘Arlo the Alligator Boy’, which debuted on the streaming service on April 16th, 2021. The movie followed the adventures of Arlo, a human alligator hybrid who was adopted by human woman Edmee in a swamp. The film forms when Arlo decides to leave Edmee and his lovely swamp in search of both his father and his place in a world that feels as if it was made without Arlo or his identity in mind. On his quest to find himself, Arlo finds friends instead; several three-dimensional characters who happen to be as lost and confused as our titular character. With help from these newfound acquaintances, Arlo and his friends are not only able to shape each other’s identities, but they’re also able to re-shape their world enough to accommodate their unique personalities and circumstances.

Audiences don’t have to watch ‘Arlo the Alligator Boy’ to understand its television sequel. I first watched the series without the film to inform me, and I was surprised with how accessible and digestible the story was without any familiarity with the movie that inspired it. That said, you’re not truly seeing the bigger picture watching ‘I Heart Arlo’ without prior knowledge of the film in mind. The movie gives context to the relationships seen in the series, and there’s a greater appreciation for these characters when you see how and where they end up compared to where they’re from. Because of this, it’s definitely recommended that you spend extra time with Arlo and his neighbors by watching ‘The Alligator Boy’ first; it’ll make your deep dive into this wacky world all the more worth it.

After the events of the film, we meet our optimistic and friendly Arlo in the midst of settling into his new home, aptly titled Seaside by the Seashore. Once invited into Arlo’s new neighborhood, we’re reintroduced to his dynamic supporting cast who each live among each other in a tight-knit community so peaceful and charming you’ll want to pack up your belongings and move to Seaside ASAP. Arlo’s neighbors include Tony, a wise-cracking mouse that runs a pizzeria, the half man half fish Marcellus, and Bertie, a statuesque young lady who lives in the apartment right next to Arlo and the only human being in the neighborhood.

Thanks to the format of the series, the characters turn out to be more than just the supporting cast the star interacts with. They manifest into fully fleshed-out realized characters in their own right, each given as much careful attention and care as Arlo himself. ‘I Heart Arlo’ is very episodic. It doesn’t truly have an overarching plot, with each subsequent episode devoted to a specific issue that later resolves by the narrative’s conclusion. Thanks to this method of storytelling, the show develops its cast in a way that it couldn’t under the hour and a half runtime of ‘Alligator Boy’, a technique that complements both the movie and the television show equally.

Don’t let the eccentric designs of these characters fool you; the cast experiences down to Earth issues that most people can identify with, especially children who are at the cusp, or in the middle, of their tumultuous and impressionable formative years. The end of each episode doesn’t only end with strong narrative conclusions, but there are powerful lessons learned at the end that seek to help its viewers grow at the same rate as its characters. A common message ‘I Heart Arlo’ enjoys sharing with its audience involves being comfortable in your own skin, accepting yourself for who you are, and the importance of surrounding yourself with positive influences that accept you as well. But its advice isn’t that black and white, and the show recognizes that sometimes change is necessary to stimulate personal growth. This is especially true when you have destructive or self-destructive habits that need to be corrected before they cause harm to others and yourself.

For what’s primarily a kid’s show, some of ‘Arlo’s cast is also surprisingly complex and three-dimensional, which only helps in making these very cartoon characters feel all the more real. Certain episodes explore how an introvert might occasionally struggle in an environment full of lively extroverts that thrive in company, other episodes might slyly tackle the issue of Attention Deficit Disorders and how to cope with a mind that constantly wanders. ‘I Heart Arlo’ offers insight and solutions to problems that not only affect children, but can continue to affect adults, creating a deeper connection between ‘Arlo’ and its viewers that strengthens their relationship.

‘I Heart Arlo’ wouldn’t be complete without its soundtrack. Just like the film, the television series serenades its viewers with lovely sing-a-longs that capture the mood of the moment. The music is always perfectly placed and timed, selling the emotions behind each episode, which just illustrates the everlasting power of music. Certain scores are so powerful they feel like something the episode’s been building towards, as if Crego developed the song first, and based the script around it. Of course, the music wouldn’t be nearly as powerful without strong voices to reinforce it, that’s where singers Michael J. Woodard and Mary Lambert come in to shine. The two, who play Arlo and Bertie respectively, both lend their talents to these characters, which also serve to elevate the talent of the entire cast as well.

‘I Heart Arlo’ really is an impressive piece of television that has everything you’re looking for. It’s kid-friendly entertainment but has enough variety and maturity that everyone in the family can enjoy it no matter the age.