‘I Am Here’: A Documentary That Commemorates the Life of Holocaust Survivor Ella Blumenthal 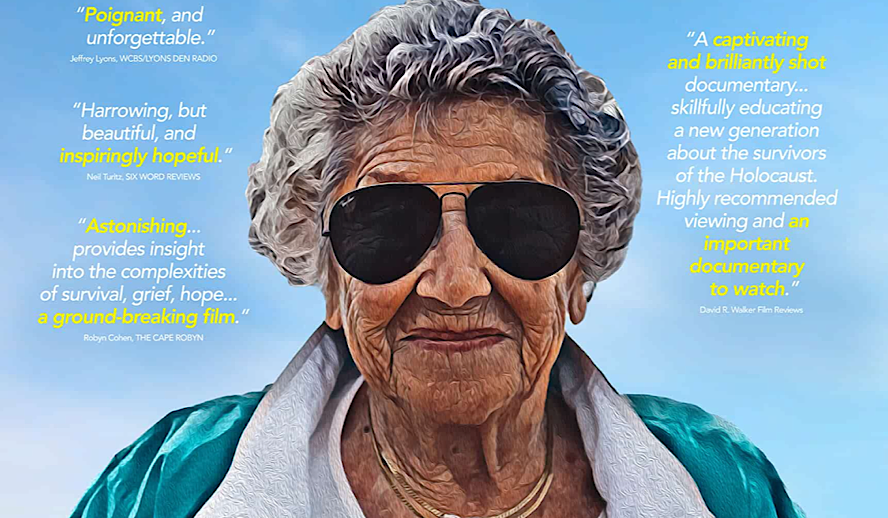 Directed by Jordy Sank, ‘I Am Here’ opens up with a montage of antisemitic remarks from news clips. The compilation ends with a host reciting a letter by Holocaust survivor, Ella Blumenthal, and her comments towards an antisemitic user on social media. Rather than condemning the Holocaust denier, the host thoughtfully recites Ella’s letter which notes: “that there is more that unites us, than divides us.”

That intro to the documentary alone gives us an understanding of who Ella Blumenthal is, not only as a survivor, but as a human being and overall wonderful person. It is not a documentary about her journey in debunking those false notions about those who deny the Holocaust, but rather it is about her values of love and her response to hate with positivity. As one of the oldest living Holocaust survivors, ‘I Am Here’ looks into Ella Blumnthal’s vibrant personality and how it has juxtaposed the tragedies she has been through in the past. The film is around the time Blumenthal celebrates her 98th birthday (she is now 100 years old). She is surrounded by her children, grandchildren, and great-grandchildren. During this time, Blumenthal recalls her life and the horrors she has gone through alongside her niece, Roma Rothstein, during the war. Sank knew Blumenthal personally since he was a teenager and used this documentary as a way to bring forth her life story on a larger platform. He was inspired to create this film because of her uplifting spirit despite everything she has been through.

Sank illustrates Blumenthal’s story by using animation in addition to documentary footage and photographs. He brings to light her past as she grew up in Warsaw, Poland in the 1920s when the uprising of the Warsaw Ghetto happened. Her and her family hid during that time in Warsaw. Blumenthal at the time was 18. She loses 23 family members in which she refers to them as “dear souls”.  She was sent to three concentration camps and survived all three. She went from Majdenk to Auschwitz and then to Bergen-Belsen where she was liberated. While also looking after her niece, Blumenthal was able to survive the events that occurred during this time and recounts witnessing several tragedies, such as the death of her father, with detail as she voiceovers the animation. She goes on to tell several stories throughout the film while obtaining a sense of wisdom. After surviving the war, Blumenthal moved to Paris and Tel Aviv. Later on, she then marries her late husband, a Jewish man from South Africa, Isaac. Afterward, she moved to Cape Town where she currently lives along with her children.

Blumenthal shares these stories with such honesty and raw emotions. The memories she shares are voiced with clear pain as she tells these vivid moments for the very first time. She remembers the smell of the burning Ghetto and the details of the room they were held hostage at. The stories are all so horrifying yet Blumenthal claims that she: “never lost hope, even in the darkest times of my life”. The memories that she shares are so vital alongside the stories of other Holocaust survivors as it brings forth very important parts of history. Blumenthal shares that she hopes to share her stories so that history does not repeat itself. What the documentary interestingly goes over is the aftermath that stuck with Blumenthal. She mentions that she got the tattooed number on her arm removed because of her husband’s family so she can rid herself of those memories.

She tells the audience that she did not share these stories with her children because she is still waiting for the wounds to heal from what she has gone through. Blumenthal’s children bring up the fact she would scream due to nightmares about Nazis taking her children away. These comments are not further addressed within the documentary but it showcases the scars that these events left on her, whether it is emotionally or physically.

Her trust and her belief in God is what carried her through these dark moments and what allowed her to retain such a heartening outlook on her life today. The documentary shows the contrast between her current life to her past history. The film goes from clips of her being surrounded by her family to her recalling the loss of her immediate family. This small detail shows the strength she has as a survivor and how her positive outlook toward life is inspiring. Blumenthal’s fiery attitude and her sparks of humor is captivating as people come to her for blessings. The documentary is a depiction of survival but it is ultimately the display of the human spirit. Her values of warmth and tenderness are enthralling as the importance of love is her number one priority. As Blumenthal states: “We must love people around us”.

Is ‘I Am Here’ Worth the Watch?

Documentaries like ‘I Am Here’ are vital pieces of media and history that we should take the time to watch and consume. The director claims that the animation is utilized in order to make it palatable for younger audiences. Although the use of illustration is understandable, it misses the opportunity to create a deeper connection with the audience. Despite this slight aspect, the overall filmmaking of the documentary is simple and the animation does not overshadow the importance of Blumenthal’s stories. There are no intricate cinematic elements in comparison to other documentaries as her storytelling essentially shapes the entire structure of the film.

Overall, these are stories that we should always remember as it is a part of our history that showcases the extent of what humanity can do. Ella Blumenthal’s experience represents a moral awareness that is inspiring and moving. With an encouraging figure at the center of the film, ‘I Am Here’ is a valuable documentary that is worth watching. ‘I Am Here’ is available to watch on Apple TV+.