A Tribute to Hayao Miyazaki: Enchanted Edifice of the Master Storyteller 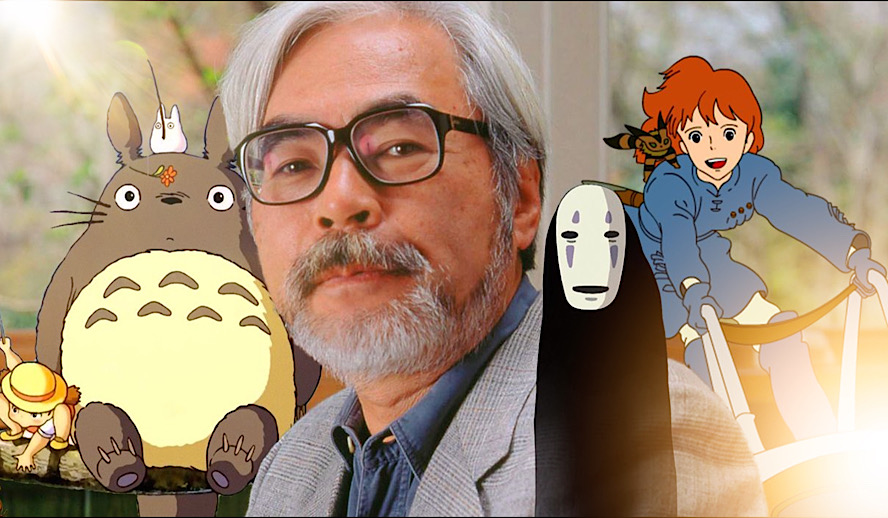 “To be born means being compelled to choose an era, a place, a life. To exist here, now, means to lose the possibility of being countless other potential selves.. Yet once being born there is no turning back. And I think that’s exactly why the fantasy worlds of cartoon movies so strongly represent our hopes and yearnings. They illustrate a world of lost possibilities for us.” -Hayao Miyazaki

Did that flower just turn into an antiquated cabin with a spherical hot tub that is also actually an eyeball, belonging to a creature that is also the cabin itself? Were those walls breathing? Did that golden annulated mirror change, or did that person looking within it grow feathers on his sleeve? With a truly unrivaled imagination, Hayao Miyazaki – legendary Japanese animator, screenwriter, producer, manga artist, director, and co-founder of Studio Ghibli (Japanese: 株式会社スタジオジブリ- Kabushiki-kaisha Sutajio Jiburi) has revolutionized the nature of world-building, reinventing a class of existing beings and plunging viewers straight into the vein of his flavorfully fleshed out landscapes.

Related article: A Tribute to Studio Ghibli: A Masterclass of Storytelling and Cinema

Related article: ‘Nausicaa of the Valley of the Wind’: A Haunting Sci-Fi Allegory that Established Miyazaki as an Environmentalist Icon

Innovatively shifting gears, Miyazaki paints a less traditional mural of heroes and villains, deviating from the fixed idea of good versus evil. With unconventional heroes, villains, and ambitiously magical settings, Miyazaki offers the world valuable insights on the nature of love, the power of community, and the vitality of honor, but not without some playful absurdity.

From the micro to the macro, Miyazaki’s heart is in the details–from the colorful moss growing on the corners and edges of cobblestone pathways, to the aerial view of a mystic plane inhabited by villagers and wildly colorful creatures. The fashion of these worlds is carved from the core of his heart, amplifying a deep fascination with nature and imperfection, encouraging viewers to foster more mindful relationships with them. Worlds where everything is both possible and unpredictable, highlighting the vital elements of what drives us forward, and the many faces we all wear when hiding behind our fears. Humanizing villains and anthropomorphizing inanimate objects places audiences in a powerful epic of fantastical imagery and metaphorical mysticism.

Karma and the Destiny of Darkness

“The concept of portraying evil and then destroying it—I know this is considered mainstream, but I think it is rotten. This idea that whenever something evil happens someone particular can be blamed and punished for it, in life and in politics is hopeless.” – Hayao Miyazaki

Present in many of his films (and popular with Japanese anime in general) is the thematic element of darkness. Miyazaki seems very intentional about not painting things in black and white, illuminating darkness as a kind of cause and effect phenomenon. For example, the boar in ‘Princess Mononoke’ became a vessel for a demon, possessing him with hate and rage. He terrorized a young boy’s village, and while defending it, the young boy’s wounded arm became a mark of what would be a slow and painful death–as it spread throughout his entire body.

The boy came to find that this boar demon was a response to an act of violence enacted by humans to the forest and to its own kind. It wasn’t just something that lurked in the depths of some creepy cave, waiting for something to walk by, it was the by-product of disharmony, almost like a karmic force. The rage and hatred from the destruction grew so severe and uncontrollable that it manifested into a demon that literally took over the boar’s body and mind, becoming a puppet for its blinded fury. Throughout the film, it seems to illustrate the notion that an ‘eye for an eye leaves the world blind’.

“I try to dig deep into the well of my subconscious. At a certain moment in that process, the lid is opened and very different ideas and visions are liberated. With those, I can start making a film. But maybe it’s better that you don’t open that lid completely, because if you release your subconscious it becomes really hard to live a social or family life.” -Miyazaki

Hayao Miyazaki – The Master of Emotions, Animations and Storytelling

In ‘Howl’s Moving Castle’, when the witch of the waste is introduced and casts a wicked spell on the young Sophie, you assume she will appear throughout the film as an emblem of evil–but instead occupies the stories rather unexpectedly. She becomes old and weak, shed of her powers. She was once very beautiful, but greed and inner ugliness aged and transformed her. Howl, who was presumed to be more of the hero archetype, was battling his own inner monsters.

The presence of karma in his films seems to suggest that the value lies not in a single line of give and take, but more like a round cycle that flows in circles involving all people and society as a whole. It almost seems like some of the characters are unlikely prophets, destined to be the wrench thrown in some wicked machine. Yet, it’s not as simple as this, his narrative views have an air of suggestibility to them–not strictly deterministic as they also incorporate circumstantial factors. Rather than experiencing the aftermath of some rigid mechanical process, the events that unravel seem unpredictable, fluid, flexible, and dynamic.

Not only does Miyazaki offer insightful commentary on our relationships with nature and to ourselves, he is also at the forefront of a growing movement of directors creating space for strong female voices/characters in his films. His female protagonists are dynamic and multi-dimensional, simultaneously fierce warriors and gentle flowers.

Aside from the brilliant world-building, strong characters, plots, and righteous themes, Miyazaki films are some of the most beautiful pieces to watch visually. It’s like if you dove headfirst into a Claude Monet painting, tripped in a hole and fell into space, then tumbled into some alien planet with mystical forests and all the previous elements combined. He also has a sharp eye for detail, making some of these whimsical fantasies seem somehow so realistic.

In ‘Princess Mononoke’, the protagonist walks through a storm cloud, and the floor beneath him goes gray, and slowly fades as the cloud moves over, and you can see a small sliver of brilliant sunshine lurking between the trees. Paired with the trickling piano music and contrasted by vibrant magical forests with purple and green, watching his films is honestly like therapy. In my opinion, Hayao Miyazaki is one of the most profound creators out there, creating truly beautiful, original, and meaningful masterpieces. An iconic storyteller and teacher, Miyazaki has a luminous imagination, pulling from his subconscious mind and heart to reach people in the most profound ways.

Creating art with purpose and intention, he applies his techniques to provoke bonds with nature and its beauty like no other, he creates powerful women leading figures, and encourages people to love one another. Prepare to cry, scream, blossom, and fight in the battles with these characters, because once you turn on one of his films, you’re falling into the pit of his imagination.