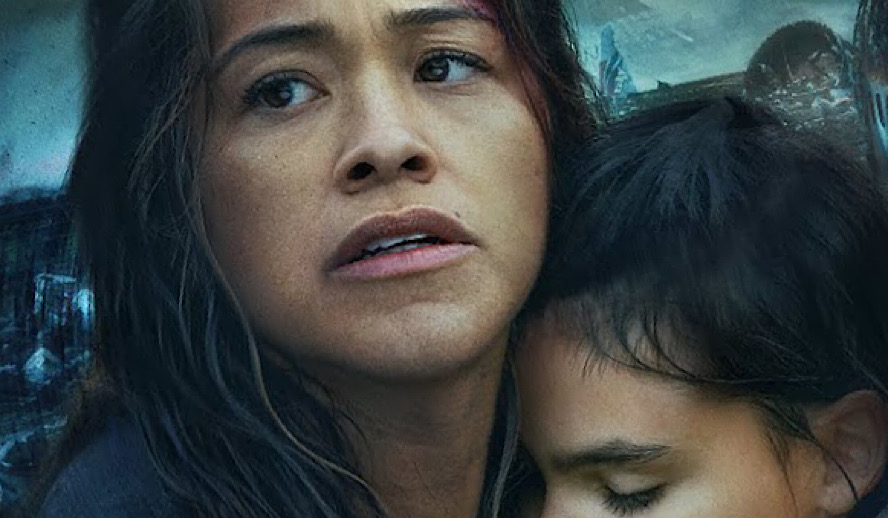 What would happen if the entire world collectively lost their ability to sleep? ‘Awake,’ a new sci-fi thriller from Netflix, aims to answer that question.

In the film, the human population suddenly loses their ability to sleep due to a solar flare that rewires their inner workings. Chaos ensues, with societies crumbling in the beginning due to lootings and crime, and escalating to violence as people begin to lose their minds. As the film surmises, the human body can only function a certain amount of time without rest. If that doesn’t happen, a number of side effects will occur, such as memory loss, neurological damage, and hallucinations, to name a few.

We center on a family comprising three – mother Jill (Gina Rodriguez), teenage son Noah (Lucius Hoyos), and young daughter Matilda (Arianna Greenblatt) – trying to survive this purge. But here’s the catch. While Jill and Noah are victims of the deadly insomnia, Matilda, for some reason, isn’t. ‘Awake’ follows the family’s journey as they attempt to make it to “the Hub,” a place hoping to use Matilda’s body to find the cure. Along the way, they’re also preparing Matilda for an independent life in case all else fails and she is left to fend for herself in the new world.

‘Awake’ – A Family Story in the Midst of Worldly Stakes

Like many sci-fi thrillers concerning the end of the world (take ‘A Quiet Place’ for example), ‘Awake’ is a family drama at its core. And perhaps that is because in the midst of earth-ending destruction, one realizes that family, and protecting them, is the most important thing. Estranged relationships are healed, grudges are forgotten, and family members are brought closer together than ever.

In ‘Awake,’ the same formula follows. In the film, Gina Rodriguez plays a single mother of two named Jill – and a failing one at that, too. With a teenage son named Noah and a young daughter named Matilda, Jill has a heavyweight responsibility on her shoulders. However, this is made even more complicated by her estranged relationship with them, namely Noah. In the past, it’s implied that Jill became a negligent mother, even getting involved in the drug trade. But now, she’s trying to do everything she can to get legal custody of her children back. This transition is still in process when ‘Awake’ begins – but of course, when chaos breaks loose, it is certainly expedited.

More than anything, Jill and Noah are brought together by their shared goal of protecting Matilda. We see them putting their lives on the line to ensure her safety, all while battling the symptoms of no rest. It’s both a physical and mental battle as the clock continues to tick to their demise. Ultimately, the family unit in ‘Awake’ is brought closer than ever, due to the literal dependence and trust they must build in one another to survive this new world. And out of that, even, blossoms a sense of love.

All in all, this is one of the strengths of the film – an element with much payoff at the end. So, if you’re looking to watch a great family drama that resolves itself at the end, ‘Awake’ will definitely do just that!

Thrills and Suspense in Every Scene

‘Awake’ is also a great thriller with exciting sequences and suspenseful moments. The film begins boldly, opting to not let its audience rest for long before plunging into its apocalyptic demise. Before we know it, the power is suddenly cut off in the world, including all Wi-Fi and any electronics, and people are unable to sleep. Not long after, society as we know it is completely uprooted – with people running in the streets and destroying property. It’s a bit hard to believe in the beginning, but the fear that comes along does enough to mask those bizarre plot points.

And perhaps that’s the way to sum up the entire film. The fear of time running out – and of not knowing when it will run out – does a great job of distracting you from the outlandishness of it all. Because, of course, none of this could happen in real life. So, this is actually a testament to the film, not a critique. Ultimately, ‘Awake’ is a film that’s fast-paced and unrelenting, embedded with fear and the unknowing. In the end, this works well to complement those central fears.

Psychologically, ‘Awake’ is an intriguing insight into what happens to the body when it is deprived of sleep. As the days pass, we see characters slowly lose cognitive functions and physical strength, until they are barely able to function. We also see how people hallucinate and misjudge situations – leading to dangerous and violent situations. While it’s unclear how accurate the film is (I’m certainly not an expert), it’s certainly terrifying how fast this deterioration occurs, and it’s such an interesting idea to explore in a film. And because this affliction is happening to everyone, rather than just one individual, we get to see how this loss of sleep can ultimately affect society and the rules that come with it. In this way, ‘Awake’ definitely has elements of the psychological thriller.

Everything Can Change in a Moment

In the film, the world as we know it changes in an instant. And while this can seem like a far-off, science fiction sort of idea, it’s more relatable than it seems. While watching the film, I kept thinking about the COVID-19 crisis and how it almost seemed to happen overnight. Whether that be to naivety or simple lack of control – anyone can remember the “night and day” moment where the world went on lockdown. What are you supposed to do at that moment – when everything changes? How do you deal with the loss of what once was and adapt to such a new world? ‘Awake’ addresses those fears as, quite similarly, the world suddenly goes on a race to find a “cure.”

Of course, the film is heavily dramatized, but the core feeling is something everyone can relate to. So, if you’re looking for a fun, action-packed sci-fi thriller with an intriguing premise (especially one that is female-led!), ‘Awake’ will be just the film for you. If anything, it’ll remind you to get enough sleep at night.

‘Awake’ is now streaming on Netflix.