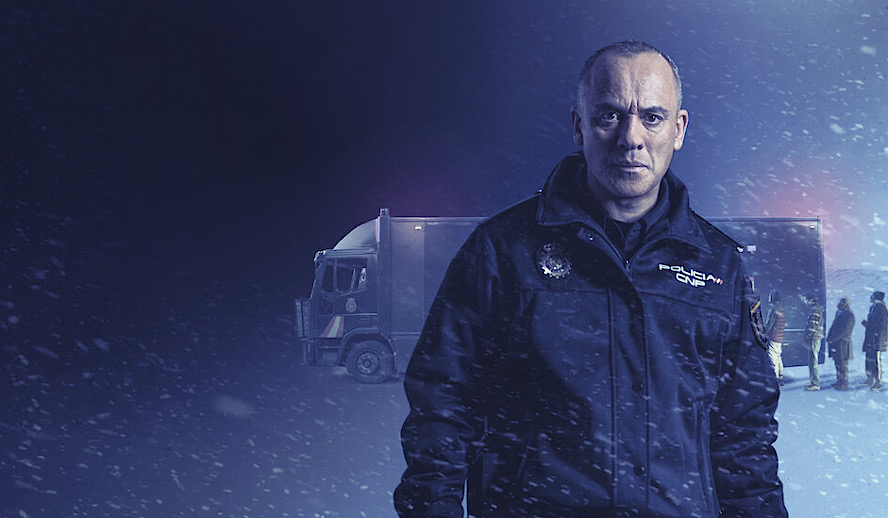 Violence and suspense are the name of the game in the new Spanish Netflix original film ‘Below Zero’, or ‘Bajocero’, the second feature-length directorial outing from co-scriptwriter Lluís Quílez. In the film, a National Police Corps officer named Martín (Javier Gutiérrez) transfers to a new precinct and his first assignment is to drive a prisoner transport truck in the dead of night. Gutiérrez’s starring role in ‘Below Zero’ marks his fourth Netflix film, after ‘The Motive’, ‘Mirage’, and ‘The Occupant’.

Martín’s new partner Montesinos (Isak Férriz), a rule-bender, who for instance likes wearing an earring even though it’s not allowed, explains to Martín that the time of the transfer is random and last minute so that everything is safer and more discreet. For the same reasons, they can’t take their cellphones with them. A prisoner transfer in the middle of the night? In the dead of winter? With no cellphones? That can’t be good.

Cops and Prisoners on Thin Ice

When one of the prisoners gets in Montesinos’s face during the body searches of the prisoners in preparation for the transfer, Montesinos grabs him roughly. Martín reminds him he can’t do that sort of thing. While Martín is a strictly by-the-book cop, Montesinos believes bending the rules is the only way to get the job done and tells Martín to relax a bit. “Rules aren’t there to be relaxed, Montesinos,” Martín says. “Why not? Is it against the rules, Martín?” Montesinos replies. “I guess so,” Martín says. “When did you last do a transfer?” Montesinos asks. “You don’t know how this rolls.” Things are tense between them from the start, and it’s going to be a long drive.

The transport truck is described as an armored car and looks like a horse carrier on the inside, with tight individual cells for the prisoners and a barred anteroom between the cells and the cab. Martín is driving up front and Montesinos is guarding the noisy prisoners from the anteroom. The truck is escorted by another police car because on top of the night-drive and the freezing cold, one of the prisoners they’re transporting is a dangerous Romanian crime boss. The five other prisoners include an embezzling politician, a drug addict, and a thief with an escape plan.

The cops decide to take a shorter route to their destination on deserted, snowy backroads. Despite the prisoners’ bickering, everything seems to be going smoothly until they hit a stretch of foggy road and the escort car disappears. Suddenly, a silver spike strip’s jagged teeth glint in the truck’s headlights, and the transport truck swerves to a stop, its tires flat. They’re stranded, and the escort car has stopped responding to radio communications. Montesinos goes to investigate, and Martín discovers they’re under attack. Who’s attacking the truck? And why? Each of the prisoners has a guess—many suspect the Romanian’s brother is trying to free him—but Martín just wants to survive the night.

‘Below Zero’ – Suspense is the Strong Suit

There are exciting and engaging action sequences in the film, but its greatest feat is how well it builds suspense. With the tense and eerie string music, the chilling tone is built early on. The shadowy assailant or assailants attacking the truck are patient and elusive, letting the anxiety rise among the prisoners who are locked up and unsure of what’s happening. Martín ends up trapped in the truck with the prisoners—safe from those attacking on the outside—but back in immediate danger from the prisoners who have gotten loose in all the confusion. An assailant hails them over the radio and tells them that they’re locked in, he’s locked out and gives them an ultimatum. If they give up the prisoner he’s after, the rest of them can live. If they don’t, they’ll all die. When the assailant turns off the heat in the transport truck, Martín and the prisoners find themselves engaged in a three-front war against the assailant, each other, and the freezing temperatures. The glaring knowledge that so many things could kill them, and soon, sustains the life-or-death tension throughout the movie.

The confinement of the transport truck is a key feature of the film because so much of the movie takes place inside it. The cramped cells each of the prisoners are locked in, the narrow hallway from the cab to the back of the truck, and the barred anteroom all perpetuates a feeling of being continually trapped. The sealed-in feeling also increases the intensity and stressfulness of the situation, with everyone at each other’s throats with hardly any room to breathe. Losing the element of control by being trapped in the truck with the prisoners, Martín realizes that perhaps Montesinos was right and that it’s not possible to stick to the rules when chaos and violence are taking over. ‘Below Zero’ creatively uses the confined location of the truck to make a pressure cooker of danger, desperation, and earnest conversations.

Like most Netflix originals, ‘Below Zero’ boasts great cinematography that helps draw the viewer into the story. Wide shots of a frozen lake at dawn or the foggy, deserted backroads lit only with headlights build tension just as effectively as the claustrophobic camerawork inside the truck. Though this isn’t an in-depth character film, as we mostly learn about the characters based on how they react to the various dangers presented to them, good performances from each of the actors help the story move along briskly at its high-speed moments and hold the audience’s interest in the quieter scenes. There are a few hiccups in the film, mainly some parts of the mysterious plan to attack the transport truck, how Martín reacts after the initial attack, and the officers’ inability to communicate with each other over the radio. But the masterful suspense in the first act, the cinematography, and the satisfying ending make the film well worth watching. Maybe brew a cup of tea when you do—the film is chilling in more ways than one.

Stream ‘Below Zero’ on Netflix now.