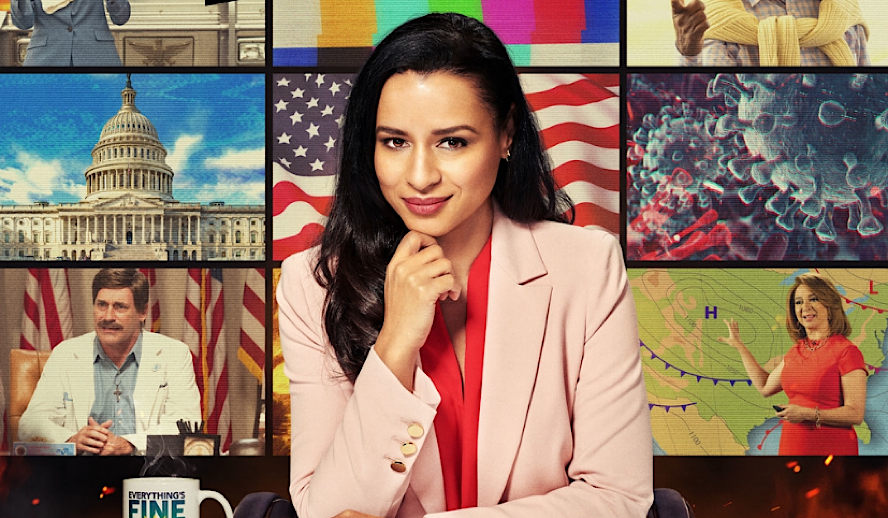 Sarah Cooper has come a long way since her stand-up days, and even further since her time in highly coveted positions at two of the largest tech firms in the United States. From being a frequent viral sensation because of her TikTok videos lip-syncing statements made by former President Donald Trump, to now having her own special on Netflix, Sarah Cooper is inspirationally breaking grounds for primarily based social media comedians. Sarah Cooper: Everything’s Fine introduces us to a full-formed,  explosive version of Sarah Cooper her fans haven’t seen before, her very own studio-backed special, with the high-quality content, all the financial and star power resources included.

Throughout the entire special, Cooper plays a news anchor, trying to hold it all together as she consistently delivers terrible (but real life) news sequentially from different time periods in 2020. The news segments are then intercut with sketches featuring a myriad of celebrities, including Aubrey Plaza and Ben Stiller. Cooper’s voice has never been so distinct, and the hilarious special is a symbol of her hard work, relevance, and overall global success as a comedian. Even though vignettes fill the duration of the special, there’s still a story within it that’s laughably gripping, but skillfully brings the theme of the special to life. From beginning to end it’s everything one could want in a topical comedy special and will leave viewers feeling refreshed afterward.

Related article: A Brief History of Sketch Comedy and its Evolution From 1959 – 2020

Sarah Cooper took on a massive challenge by creating a special that encapsulates that the historically bizarre year 2020 has been. That about sums up the entire theme of the special; trying to emulate the feeling of someone living through one of America’s craziest years. Cooper does so hilariously though, always punching up and taking appropriate jabs at the people who’ve made 2020 what it is. Many of the targets of the comedy are misogyny, racism, and controversial political figures. Going at such large, topical subjects in the midst of them happening was a daring move by Cooper and one that will be appreciated more as time goes on.

Fred Armisen is in the special too as her producer. Stranger Things lead Winona Ryder stars alongside Cooper in a hilarious sketch, in which Cooper’s character has reached a breaking point, and they both accentuate their anxieties about the current social climate. The stars attached to this project are insurmountable, and viewers are guaranteed to be surprised and delighted. There are plenty of surprises, jokes, and commentary that encompass topics most people are familiar with or can relate to, so the special undoubtedly will entertain anyone who’s been slightly conscious during this year.

Sarah Cooper has a versatile mind that’s unusual in Comedy. She started working as a designer for Yahoo, then on user experience for Google. Other than stand-up, her first glimpse of fame for her comedic abilities was through a blog post she wrote in 2014 titled “10 Tricks to Appear Smart in Meetings” which garnered millions of views from people all over the internet. Just two years later, Cooper released a book with a similar title to her viral blog, “100 Tricks to Appear Smart in Meetings” which is a satire of self-help books, and is as truthful about people and their idiosyncrasies as it is hilarious in the joking of it. With a creative twist, she then released a coloring and activity book, “Draw What Success Looks Like,” just a few weeks after her first book.

These creative projects were received quite positively and catapulted Cooper to shaping into her true form, honing her comedic voice for professional work. Bringing her strong voice to the battle against toxic masculinity and a male-dominated world, Cooper wrote a third book titled “How to Be Successful Without Hurting Men’s Feelings,” going with the same satirical angle, as will be a staple of her comedy, that includes advice for women on how to flourish and navigate through men’s most comical, yet generally true flaws. Unfortunately, none of her books were commercially successful, largely due to her simply being unknown at the time. Then in 2020, something no one ever would have expected happened; the global pandemic, and a president who was clearly too incompetent to handle it. Cooper utilized her comedic talents and swooped into the TikTok sphere to show them off to a world yearning for entertainment to keep their mind of the state of affairs, and hopefully make them laugh. Lip syncing Donald Trump brought Cooper worldwide fame and has elevated her increasingly since she began doing it. This is not the peak of Sarah Cooper’s career, but the very start.

The Next Big Thing in Comedy

The star power behind this special shows that there’s a lot of faith in Cooper’s talents, particularly from the most talented comedians in the industry. Her lip-syncing videos were just the tip of the iceberg of Cooper’s comedic range, which is exemplified throughout the special with many of the sketches veering off into bizarre territory. The blending of her different comedic styles is extraordinary, with sharp and clever punchlines, to pseudo slapstick comedy, it’s all executed efficiently and lands almost every time. It’s spontaneous, surrealistically peculiar, yet brilliant. The humor is fresh, unique, and there hasn’t been sketch comedy quite like it in many years. Cooper ultimately is ushering in a new wave for social media stars, providing some light at the end of an incredibly competitive tunnel. Cooper has mastered short-form comedy and this special shows that she can do the same for long-form. The influences of her comedy can be traced to greats like Amy Schumer, Key and Peele, and a surprise appearance in the show, Maya Rudolph, with an even wider range that includes more comedic genius influences. As she evolves, there’s no doubt she will harness this broad range and sharpen a unified comedic style reflective of her original voice, and her special highlights just some of her distinct versatility.

Sarah Cooper’s quick climb to success this year serves as a showcase to her extraordinary comedic talent, and she has gained enough credentials within the past few months to earn the title of comedy’s next big thing. When people look back at 2020, they will be scouring the media that reflects the time period the best. Sarah Cooper may very well have created a special that will serve as a comedic emblem to the insane year. During a time of constant anxiety, financial loss, and emotional strain, people like Sarah Cooper were putting in the time and effort to make millions of people laugh. Out of all the things to come out of 2020, Sarah Cooper will be remembered as one of the best.