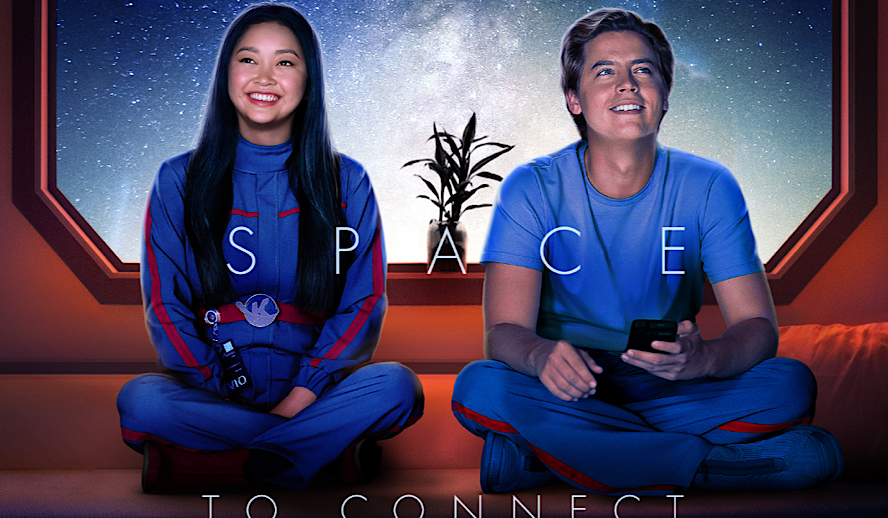 A Familiar Face in Space

Going into the latest HBO Max original film ‘Moonshot’, I was cautiously optimistic. On one hand, I’m not someone who’s strongly into romantic comedies, as stories centered around love are ones I feel are generally some of the least interesting in terms of what film has to offer (not to say that they aren’t good, or even great romance films out there, it’s merely a personal preference). On the other hand, this movie blends romantic comedy-drama with science fiction, and a cheesy teen romance film with a sci-fi backdrop did sound potentially interesting. Also of note is the fact that this movie stars Cole Sprouse, someone who, along with his brother Dylan, has been in the acting business since the two were very young. As someone who first came to know about them from the Disney Channel sitcom they starred in, ‘The Suite Life of Zack and Cody’, and its sequels series ‘The Suite Life on Deck’, which I watched quite a few years ago, I was curious to see something new featuring one of the brothers.

‘Moonshot’, directed by Chris Winterbauer and written by Max Taxe, follows a college boy named Walt (Cole Sprouse) living in the year 2049, a time when Mars has been colonized. Walt wants more out of his life and thinks he can do so by going to Mars, so when he finds an excuse to travel to the red planet, he sneaks aboard a spaceship with the inadvertent assistance of Sophie (Lana Condor), a girl challenging her own aerophobia in order to reunite with her boyfriend in person. When she finds out that Walt’s made his way on board, she reluctantly helps him keep a low profile until they reach Mars. The film takes a light-hearted approach to the “future Earth” concept often seen in sci-fi media, in stark contrast to works along the lines of ‘Blade Runner’.

I’ll admit, I was pleasantly surprised by a lot of what ‘Moonshot’ had to offer. The film doesn’t take itself too seriously, as evidenced right off the bat with a wise-cracking robot running a coffee shop on a college campus, complete with a cartoony digital face in the shape of a smartphone screen. A tone as playful as this is a breath of fresh air in a time when so much science fiction media revels in dark, depressing, dystopian worlds and themes, and I couldn’t be happier that this film managed to have fun with a premise that could very well have been taken in a much more serious direction.

‘Moonshot’ is also funnier than I was expecting, with a lot of one-liners that caught me off guard. It’s also very well directed, making great use of colors and lighting to establish the atmosphere. One particular shot that I loved happens right when Chris Winterbauer’s director credit appears on the screen; Walt is taking out the trash at the coffee shop he works at, watching a rocket take off from a nearby launch station. The distance between Walt and the rocket, both from where they are physically and from the camera’s perspective, perfectly encapsulates what Walt is feeling at that moment; the bitter irony of his life’s goal being right in front of him, yet unattainable all the same.

However, with all that said, there were a few things that unfortunately held this film back quite a bit. The main issue I had with this movie was Walt himself. For the first forty minutes or so of the movie, he comes across as far more unlikeable than he should. Even though the film is clearly aware that he’s in the wrong for the way that he acts, the audience is given little reason to root for him at all. There’s no shortage of movies where the main character starts off as unfavorable, only to change his ways as the narrative progresses, but generally when that happens, said main character is given some sort of trait that makes him or her likable despite their wrongdoings. ‘Moonshot’, however, doesn’t really give Walt any kind of likable or endearing sides, and it isn’t even a “we can see where he’s coming from” type scenario. He wants to go to Mars in hopes of finding a new purpose in life.

He convinces a girl he meets to buy tickets to Mars so she can meet her boyfriend in person, then sneaks aboard the ship after bringing her to the launch site. After she allows him to stay in her room, he acts moody over having to keep a low profile. Even in a film that refrains from being too serious, having the lead character start out this selfish really made it hard to feel anything for him. On the plus side, the few other problems I had with this movie were minor in comparison; the film has some predictable story beats, and as much as I liked the visual presentation, one bizarre directorial decision came in the form of location-describing text occasionally showing up. While there are plenty of movies that benefit from having the name of the location being displayed on screen for clarity’s sake, the way this movie features the word “SPACE” briefly taking up the entire screen when the ship Walt sneaks onto makes it out of the Earth’s atmosphere is both confusing and distracting, to say the least.

Is ‘Moonshot’ Worth a Shot?

‘Moonshot’ has a lot going for it, and I’m personally glad that I took the time to watch it. From a storytelling perspective, I really liked the way the sci-fi angle is tackled, with the central story being driven by the main character’s personal motivations more so than the world around him. This isn’t a science fiction movie with a romantic side plot, this is a romantic comedy that just so happens to take place in a science fiction setting. Despite that, it never feels like it’s sacrificing potentially interesting ideas in favor of a silly romance story. Rather, the film mixes the two so they play off each other in harmony. And although I stand by my feelings toward Walt as a character, the film’s story does make up for it by remaining engaging throughout. On top of that, it’s really neat to see a lesser-known director like Chris Winterbauer have a chance to shine by helming a film like this.

Screenwriter Max Taxe currently has another film titled ‘Ripple’ in development at Netflix, which curiously enough is another romantic science fiction film. ‘Moonshot’ left a good enough impression on me to have my interest piqued about this upcoming project, and I look forward to not only seeing how well it turns out, but how it compares to ‘Moonshot’. Will it be comedic like this movie was? Will it be more serious? We’ll find out in due time, but for now, I’d say ‘Moonshot’ is worth checking out if you’re in the mood for a lighter piece of entertainment. Who knows? You might even see something in Walt that I didn’t.