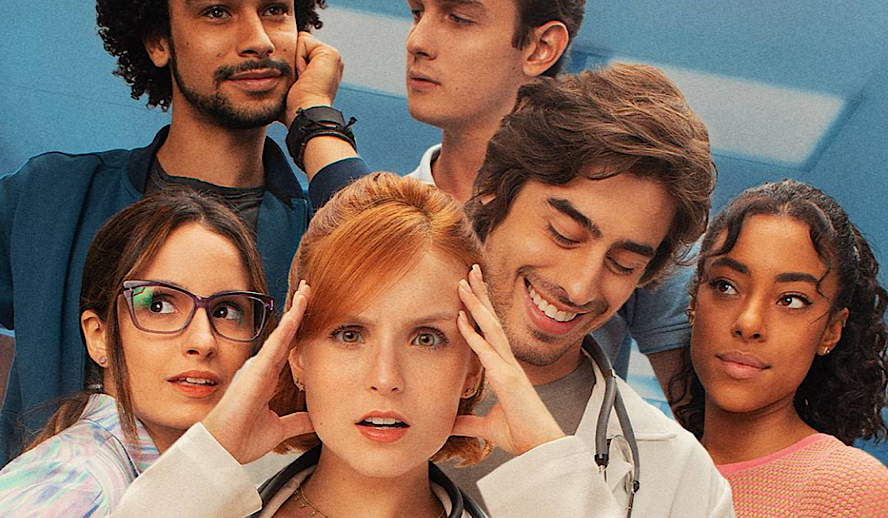 Netflix has its fair share of romantic comedies; while some of those films nail it, others seem to have forgotten how to use the hammer along with the basic rules of its genre. There’s a difference between a lighthearted comedy, where its lead character’s problems are not entirely problems, but there is still evident friction for the character to resolve, than having a film that has forgotten the importance of conflict.

‘Lulli’ is a Brazilian romantic comedy film that delivers a predictable plot and set of superficial characters. When watching ‘Lulli,’ you find there is solid pleasure in realizing that the premise is obvious from the start, as it quickly lets you decide if you should continue watching in its first five minutes.

Lulli is a bright-eyed, enthusiastic, but a highly selfish medical student whose biggest ambition is to become a surgeon. Lulli has suffered through the years of medical training, and now, on the first day of her residency, she is about to embark on a three-day (or so it seems) personality makeover.

Lulli suffers from a couple of diseases known as selfishness and egotism, which causes her to believe she has the correct answers even when she doesn’t. The character of Lulli is brilliant, but her arrogance makes her unaware of her flaws. Her most significant defect is that she is unable to listen, which affects every aspect of her life, and does not allow her to be a qualified doctor or even a good person.

While Lulli performs a medical exam on an older man, the machine signals an error. Lulli proceeds to make things worse and goes on a tangent, approaching the machine and believing she is about to save the day. Instead, a sudden electric shock ends up hurting Lulli and her ex-beau. She then wakes up in a hospital bed, finding herself being able to listen to other people’s thoughts.

‘Lulli’s’ creators embark on exploring the concept of listening to others, but although the idea might’ve been raised from pure intentions, the film’s execution was developed on a surfaced level.

It’s a Mixture of ‘Grey’s Anatomy’ and ‘What Women Want’– Well, Kind of

Think of ‘Lulli’ like a modern-day ‘Grey’s Anatomy’ minus the steamy elevator sex scenes, a handsome Dr. Shepard, and Meredith Grey’s moralistic voice-overs. Also, definitely obliterate the heartbroken endings found, especially on that 2008 season that had you blubbering at the end of each episode. Add a tad of the famous romantic comedy starring Mel Gibson in his prime, ‘What Women Want’ in there. But cut out the struggle Mel Gibson’s character had to go through, where he actually had to attempt to be in someone else’s shoes to complete his character’s goal. ‘Lulli’s’ footsteps try to venture towards these creations, but rather fall behind these fantastic productions.

Through the days the film transpired, it seemed as the conflicts that Lulli found herself in were solvable within seconds. A failed relationship wasn’t really a failed relationship. A ruined career wasn’t really a ruined career, and what seemed to be a magical power vanished just like any other problem in Lulli’s life, in a blink of an eye and without any hardship from Lulli whatsoever.

Julio (Sergio Malheiros) is Lulli’s best friend who finds himself in a debacle, sharing his sexuality with the world or not. Not everything needs to be found weighty, but even if it appeared that ‘Lulli’ found a space for LGBTQ+ representation. The Brazilian film finds itself with the power to deliver a compelling and lovely message. But instead, Julio’s coming out was portrayed as the butt of the joke, and the struggle of a closeted gay man was downplayed for no other reason than cheap comedy.

Lulli appears on the screen with beautiful red hair, an incredibly smart attitude, and a handsome boyfriend, whom we find out later is almost too perfect to be true, but between Lulli’s selfishness, she almost lost it all. Almost, being the keyword. The lack of backstory between Lulli’s love interest, Diego (Vinicius Redd), leaves the audience uncertain on what to feel when a potential breakup is about to happen. From time to time, the build-up through Lulli’s perspective was shaky, as the reasoning behind Lulli’s emotions was often unclear. It seemed like ‘Lulli’s’ creators forgot to guide their audience regarding Lulli’s feelings towards Diego. It also seemed as if the character of Lulli was undeserving of Diego’s sweetness, and he was way too quick to forgive her.

Although ‘Lulli’ fell behind many great movies similar to its genre and delivered a rather superficial world, there were still a few high notes. The film accomplished to deliver sweet jokes and a great supporting character. Lulli’s best friend Vanessa (Amanda De Godoi) accomplishes to overshadow any best friend character I’ve seen in a while. Brazilian child star Larissa Manoela plays the character of Lulli. Manoela’s performance outweighs the story provided to her, as she is no amateur when it comes to acting. Manoela grants a fair performance, delivers Lulli’s personality the way it should be.

The friendships created around each character helped for beautiful character arcs. Lulli’s best friends helped soften Lulli’s selfishness and unlikeability because if she has such cool best friends, that means there has to be something good in her, right?

A rivalry between Vanessa and another girl classmate that initiated over a boy takes us back to the beginning of anti-feminist ideals, protruding two young women against each other for the likes of a man. The initial idea of the friction between these two felt unnecessary. Although the two women grow into liking each other at the end, I can’t help but think that maybe there could’ve been another reason behind the dislike against each other.

It seems like ‘Lulli’ can be taken as a soft comedy, targeting a younger audience known for ignoring the obvious, making the creators of ‘Lulli’ tell its audience the story instead of showing it. ‘Lulli’ might accomplish to set a love story at the end, one that we weren’t sure we were watching.