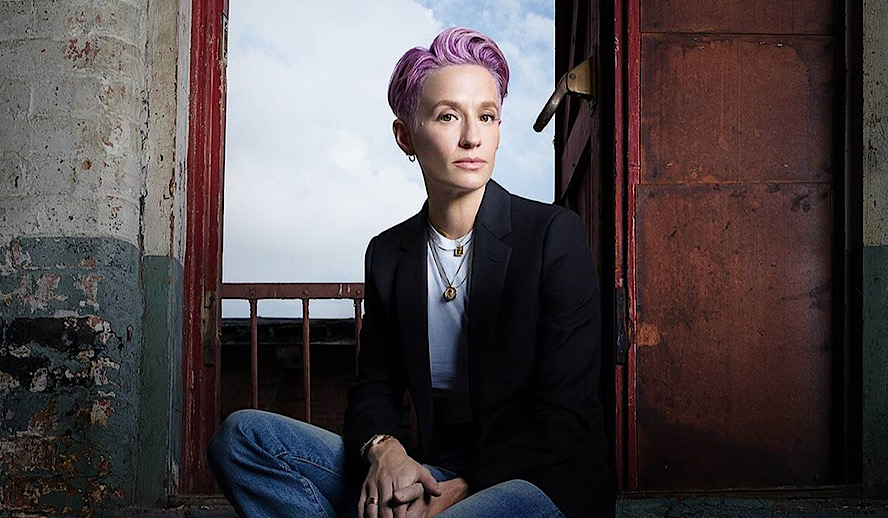 In announcing the special, HBO said Rapinoe would lead a “spirited dialogue with these change-makers, aiming to help shape the ongoing cultural conversation that has been taking place during this significant time in our country’s history.” The trailer displayed a preview of the star-studded – as well as socially-distanced – panel, in which the guests discuss the challenges we are facing as a nation as well as the upcoming presidential election.

“This is the first election where I actually feel like we are voting for our lives,” Hannah-Jones says, before Hasan Minhaj also quips, “I have this joke – are we in the downfall section of our Wikipedia page right now?”

Rapinoe, the co-captain of the US Women’s National soccer team, first tweeted about the news of the new special on Twitter on July 27, writing: “We have an opportunity to reimagine society and ourselves. Join me in a conversation with @AOC, @nhannahjones and @hasanminhaj to talk about the challenges we face as a nation and how we can move forward together.”

Produced by HBO Sports, the series is executive produced by Rapinoe herself, as well as Peter Nelson and Bentley Weiner of HBO. “We are grateful Megan Rapinoe would choose HBO as home for this conversation and look forward to more opportunities with her to continue this dialogue,” said Nelson, EVP of HBO Sports. “Megan is fearless in speaking out on issues.”

“It is an honor to host a show with a critical conversation between some of America’s most innovative thought leaders,” Rapinoe said in an equal expression of gratefulness. “I am so thankful to HBO for providing such a powerful platform for this important dialogue.”

Rapinoe is no stranger to activism, making her a perfect choice as a host for the thought-provoking special. After gaining popularity as one of soccer’s biggest stars, especially after her performances as a key player in the 2015 and 2019 Women’s World Cup victories, she has used her platform to speak on a variety of issues such as equal pay, racial justice, and LGBTQ issues.

Rapinoe has lent her voice over the years to advocate for equality in regards to women in sports. Despite the U.S. Women’s soccer team’s massive successes over the years, with four World Cup titles and four Olympic gold medals, the team still continues to be paid less than the men’s team in a disgraceful display of sexism from the United States Soccer Federation. As one of the 28 players who are a part of the federal class-action lawsuit against the federation that alleges gender discrimination, Rapinoe has said the issue is about “so much more than the money.”

In addition to rallying for equal pay, Rapinoe has been very outspoken about racial justice issues. Back in 2016, she galvanized attention for kneeling during the national anthem in support of Colin Kaepernick, for which she became the first white U.S. pro athlete to do so. Following the match, she said “It was a little nod to Kaepernick and everything that he’s standing for right now. I think it’s actually pretty disgusting the way he was treated and the way that a lot of the media has covered it and made it about something that it absolutely isn’t. […] Being a gay American, I know what it means to look at the flag and not have it protect all of your liberties. It was something small that I could do and something that I plan to keep doing in the future and hopefully spark some meaningful conversation around it.” The move drew admiration from some but criticism from others, with  U.S. Soccer President Cindy Parlow only recently apologizing to Megan for how the federation responded to her decision to kneel in protest.

At the virtual ESPYs in June, Rapinoe also shared a powerful message alongside Sue Bird and Russel Wilson, who all hosted the ceremony, once again referencing Kaepernick and calling for an end to racial injustice. “Colin Kaepernick never shied away. He knew that discomfort was essential to liberation and that fighting the oppression against Black people is bigger than sports. So will it be uncomfortable? Yes. In speaking up, will we make mistakes? Yes. That cannot stop us from trying, and not just for a few days or for a few [Instagram] posts.”

Rapinoe’s advocacy for LGBTQ issues and organizations have additionally been consistently strong since she publicly came out in 2012, with her also being vocal about her relationship with Seattle Storm guard Sue Bird, the three-time WNBA champ and four-time Olympic gold medalist. Having her host this panel is therefore a significant achievement of her already-present visibility as a member of the LGBTQ community and as a female athlete a part of the fight for gender and racial equality. She is undoubtedly a powerful leader on and off the field who is continuing to use her platform for good as she strives to better our country in regards to social, economic, and political issues.

Meghan Rapinoe combines with Alexandria Ocasio-Cortez, another notable and immensely successful female of power as a U.S. Representative, Hasan Minhaj, who brings his diverse comedic take to the current state of affairs in his Netflix show, and Nikole Hannah-Jones, who has long reported on racial injustice, most notably in her movement named 1619 Project. This diverse and impassioned group makes for titillating intellectual discussion throughout the  HBO special. With four people of marginalized groups featured, the panel that Seeing America boasts furthers the visibility of people of color and LGBTQ within mainstream media. The show allows these individuals who hold successful and important positions to enter the spotlight, providing and empowering them with even more of a platform to voice and shed light on the many issues that continue to plague our country.