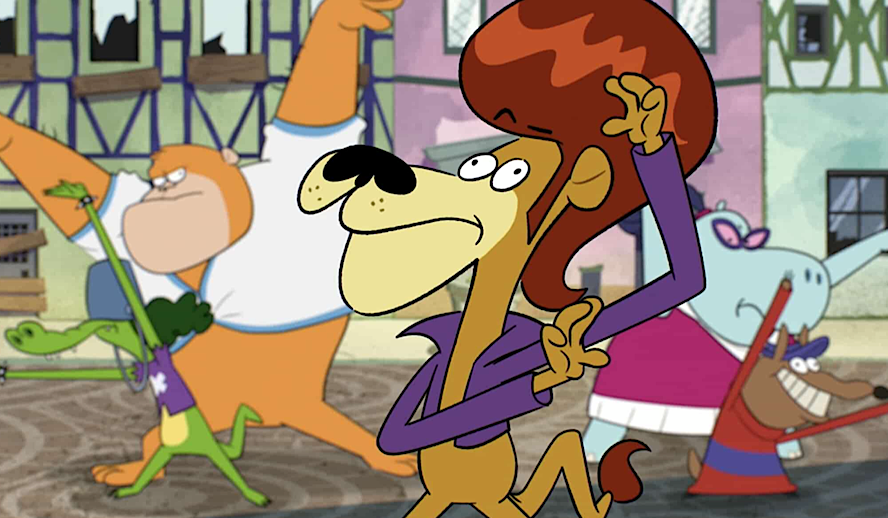 Beginning in 1958 with ‘The Huckleberry Hound Show,’ Hanna-Barbera’s cartoons are a staple of many generations’ childhood memories and TV obsessions. Memorable and unique, their expansive animated catalog includes shows like Yogi Bear, Snagglepus, and Huckleberry Hound — all characters that audiences are already intimately familiar with and love! In HBO Max’s ‘Jellystone!’, the complete expanse of that lineup gains new excitement and life during a huge and long-awaited crossover show that’s bound to entertain.

Set within the community of Jellystone, the Hanna Barbera characters make up the entire cast, leaving the show with something for everybody, every new and old fan of the notable animated characters.

‘Jellystone!’ revolves around a cartoon community where there is no main character, just a cast of compelling characters whose stories all beg the same amount of screen time and importance. C.H. Greenblatt, the showrunner and executive producer for previous explosive animation successes like Chowder and Harvey Beaks brings his traditional frantic energy to the show, creating escalating situations that have fans on the edge of their seats, despite the recycling of characters.

The episodes start with an overall straightforward problem that spirals out of control into chaotic shenanigans that you can’t help but enjoy following. Despite the fact that the classic 1960s background the characters used to have is gone, the modernization is done with such care and skill that audiences new and old are pleasantly surprised.

Half-hour episodes are split into roughly 15-minute segments that focus on a special member of the community, giving them their time in the spotlight. In one, the ambitious and hyper Cindy Bear starts out wanting to read a book for her book club but the episode ends with her turning everyone in town to gelatin. In another, Augie Doggie and her friends attempt to get into an adult movie but find themselves trying to ward off an alien invasion. Being able to watch as mundane and standard adventures quickly spiral out of control into strange and absurd ones, is not just the primary compelling component of the show, but it appeals to every age with its sheer ridiculousness!

Much of what accomplishes the humor is that the excellent cast achieves more than just superb voice acting for our classically beloved characters. While it’s easy to cast actors whose impressions fall short and odd to the ears of adults who grew up watching Yogi Bear and Huckleberry Hound, the studio’s careful casting created the perfect environment. Actors Jeff Bergman and Jim Conroy find a collaborative way to not only pay homage to the characters and their roots but also avoid unrealistic and overly bearing imitations of the characters. Yogi Bear’s lovability and hungry personality remain authentic and Huckeberry’s Southern accent and charismatic ways not only sound accurate but also perfectly hit the mark.

Similarly, the animation neither overextends itself nor unsuccessfully copies the original. ‘Jellystone!’ is a modern cartoon and with its new title came the chance to fully emulate modern and successful cartoons without overusing and emphasizing 3D computer animation, like it did in the 2010 ‘Yogi Bear’, which turned audiences away with its garishness.

Instead, the 2D animation perfectly matches the character and their happenings, finding the perfect way to combine the classic characters with modern animation styles like the straight lines and clean backgrounds we see in the ‘Regular Show,’ an insanely successfully modern cartoon on Cartoon Network and Nickelodeon. Most importantly it shifts the focus from overzealous animating styles to the actual content and internal struggles of the characters throughout the program.

Jellystone Perfectly Adheres to Both Young and Old Fans

The trick with a project like this is often in satisfying both the desires for nostalgia and novelty, and that is exactly what ‘Jellystone!’ achieves. Especially for a cartoon so important to multiple generations, the significance of appealing to not just younger newer audiences but also older ones is integral. As children fall in love with Yogi Bear and cast, adults who also end up watching the program with their young ones will be able to find joy in seeing their classical characters revitalized.

Perhaps most appreciated is the self-awareness ‘Jellystone!’ brings to everyone’s TV screens. To appeal to a more anxious, more present generation, its self-awareness in cringy jokes and reimaginations is not only refreshing but it adds to the quality and watch-ability of the show. While the new theme is mature, it’s appreciated by all audiences who like seeing and relating to the different psychological states the characters are put in and how they ultimately take care of themselves. The emphasis on learning how to take care of yourself and your mental health strikes true for everyone, especially with the pandemic and the damage it has done to America’s psychological state.

There’s even a hint of dark humor that perfectly appeals to older watchers of the show, who are intimately aware of the jokes and commentary ‘Jellystone!’ is making about our current world and state of existence. One episode even takes a dig at our failing health care system which most children would miss but adults find themselves shocked and entertained by.

Especially with cartons like ‘The Simpsons,’ setting a precedent for an intelligent and humorful animation that all ages can relate to, ‘Jellystone!’ is executed with precision and awareness that other cartoons have long lacked.

Hanna Barbera’s character needed this save, as most of their characters found their previous success in an America that watched the same thing at the same time. The ability to mimic what was already successful and integrate it into the everyday lives of Americans gave the studio the name that it needed in the 1960s. But now, in the age of new animation technology where the same rhythm and schedule can hardly be seen, the ability to stream this modernized show is exactly what was needed.

Often cartoons opt too far to either side, talking over their audience’s head or pandering to children with bright loud colors, conversations, and wacky happenings that completely disregard an adult’s sense of humor. But ‘Jellystone!’ strikes the balance it needs, fixing a replacement generation for his or her future nostalgia as these characters see them through to adulthood.