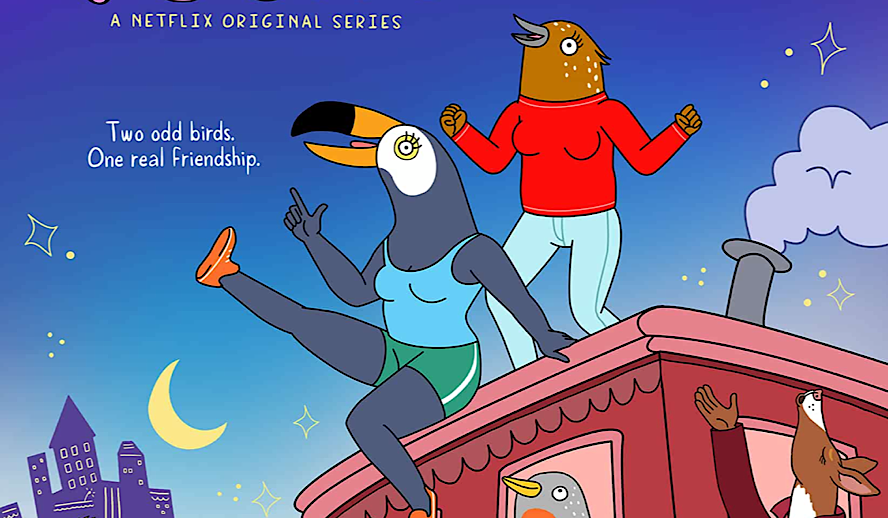 Way back in 2019, Netflix premiered the adult animated sitcom ‘Tuca & Bertie’ on their streaming platform. Following the story of two bird-women navigating life together in their 30’s, the first season garnered critical praise and many critics considered it as one of the best shows of 2019. But then, sadly, Netflix canceled it months after its release. Fans on social media protested the move, hoping that some network would swoop down and move forward with production. Luckily, 2020 brought some good news as Cartoon Network’s nighttime programming block Adult Swim picked it up for an additional season.

Now, here we are, over a year later, as the first episode of ‘Tuca & Bertie’ is finally out and the second season underway. Some might have worried about how the switch in networks might affect the show on a creative level. After all, Netflix is known for being pretty creatively open. What will happen now that the show is on cable television and open to a larger audience?

Well, luckily, so far nothing has changed and ‘Tuca & Bertie’ has come back swinging. The premiere episode, “Bird Mechanics” has brought us more of our favorite bird-people with more fun and fast-paced comedy for everyone who enjoyed it from the first season. Show creator Lisa Hanawalt brings back all of the humor and distinct visual style that made the first season so popular over into its second season with ease.

A Recap of Episode One

The first episode throws you right into the action with Bertie (voiced by Ali Wong) visiting a therapist, who catches the audience up to where Bertie is at in life from the previous season. She’s 31, works at a magazine publisher and runs a baking business out of her apartment, and wants therapy due to her anxiety attacks and lingering trauma. “Standard stuff,” the therapist says, nonchalantly. And this jump-starts us to the story of the episode: Bertie is going to a fancy restaurant with her boyfriend Speckle (voiced by Steven Yeun) to celebrate their five-year anniversary, but she’s afraid she’ll have a panic attack and ruin their night. So, she goes on a hunt to find a therapist who can quick-fix her of her panic attacks and let the night run smoothly.

Meanwhile, Tuca (voiced by Tiffany Haddish) is having no luck looking for a date online. So, she decides to create a reality show, called ‘Sex Bus’, where she can date a large group of people at once and eliminate them each individually to find a perfect match. Both plots are pretty funny here, with Bertie going through therapists like Tinder matches and Tuca eliminating contestants off of ‘Sex Bus’ for simple nonissues like being having too deep a voice or not liking broccoli. By the end, both stories coalesce into a sweet ending, but one that still has some threads hanging for future issues that will dangle throughout the season. I’m intrigued to see where this show goes from here.

This show is definitely zany and unlike a lot of shows on television now. And that can be attributed to Lisa Hanawalt and the wonderful art direction she decided to take with the show. It’s clearly similar to her previous show that she designed for, the acclaimed ‘BoJack Horseman’, (her friend and ‘BoJack’ creator Raphael Bob-Waksberg is also an executive producer for the series). But where ‘BoJack Horseman’ often stayed in the realm of wacky realism for its world, ‘Tuca & Bertie’ isn’t afraid to get a little weird to get the point across.

In one instance, when talking to her therapist, Bertie compares herself to a haunted house and her body physically changes to that of one. Or when Tuca’s “sex bus” has to drive over an opened bridge, we watch the bus fly over and jump a track hurdle, with the bus driver winning the first-place trophy. It’s all surreal and sometimes nonsensical, but that’s the point of it, and its animation style adds to its craziness.

It all fits right in with Adult Swim’s style of surreal humor and odd concepts. While ‘Tuca & Bertie’ may feel like a colorful show you can just turn your brain off and have fun with, there’s more to it than just fun jokes and bright colors. The zany aspects of the show are anchored by good writing and great voice acting. Ali Wong is great as the introverted Bertie. The panic in her voice as she worries about small issues is very relatable.

Tiffany Haddish is the perfect choice for the outgoing and adventurous Tuca, whose carefree lifestyle makes her such an enjoyable character to watch. Both women have heavy experience in the comedy world, and their voice acting shows it here. Steven Yeun does a good job carrying that honest good-guy energy that he always does. He’s always had a likable quality to him and he displays that with his portrayal of the mild-mannered Speckle.

As ‘Tuca & Bertie’ pushes past cancellation into Season 2, it shows viewers why it’s worth keeping this lively show on TV. The cast does a great job in their roles and they really have fun in the parts they play. Adult Swim is a great home for the series, where it’ll have a better time reaching a larger audience with its off-the-wall humor. And even though the show is mainly visual gags and fast humor, it still knows when to slow down and get serious.

“Bird Mechanics” is an energetic season premiere that sets up more fun for the rest of the season but still has our characters facing issues that will surely be a problem the characters must deal with through the rest of the season. Just like the previous season, it’s still hilarious to watch and for those debating on catching up, the episodes are only 30 minutes and filled with laughs. ‘Tuca & Bertie’ is back, and it’s moving full-steam ahead.

‘Tuca & Bertie’ Season 1 is available on Netflix, and Season 2 airs on Adult Swim Sunday nights at 11:30pm EST. The first episode, “Bird Mechanics” is available now for free on YouTube.