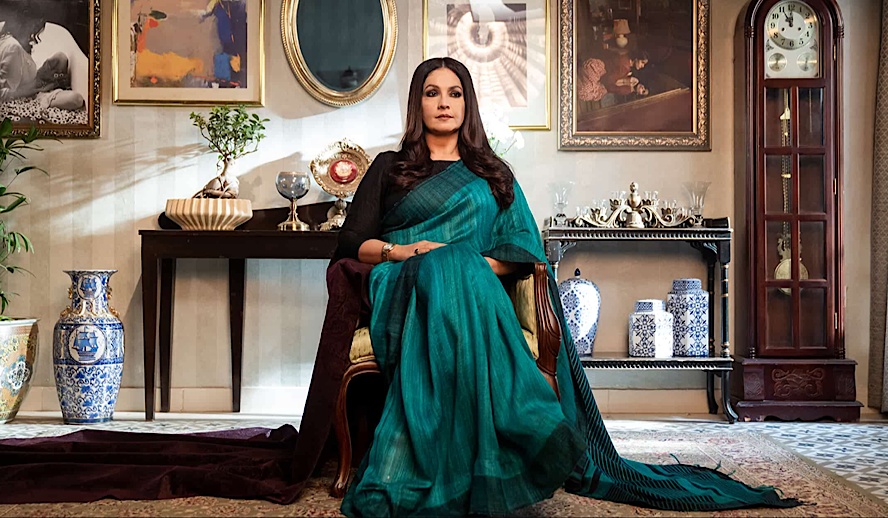 How much will it cost five women to live their dreams in the City of Dreams? The new Netflix show, ‘Bombay Begums’, explores this through a gripping plot line that presents twists and turns in each of its six episodes. Directed by Alankrita Shrivastava, known for exploring deep-rooted perspectives of women in Indian society through her works like ‘Lipstick Under My Burkha’ and ‘Made in Heaven’, ‘Bombay Begums’, through its convincing characters and many sub-plot lines, addresses the themes of classism, sexual harassment, toxic masculinity, and sexuality in all walks of life.

The series follows five women, all in different stages of their lives and of varying socioeconomic statuses, as they navigate through a city with a population of over 20 million to build a name for themselves. The show begins as Rani (Pooja Bhatt), a recently appointed CEO of the fictitious Royal Bank of Bombay, struggles to live up to her new position as the company’s male-dominated board of directors doubt her abilities as a female leader. Her character’s evolution throughout the season unveils new layers to her tough-skinned personality. As much as she would like to come off as a cold-hearted, curt, and profit-oriented professional, her walls lower as the show progresses and the viewer sees her at her most vulnerable – through heartbreak, public humiliation, and resurfacing of past trauma.

The show’s most compelling cinematography technique is telling the story through the words of Rani’s teenage step-daughter, Shai (Aadhya Anand), as she writes to her late mother about her thoughts and observations of the world around her. Shai’s journey may resonate with many adolescents, as she feels insecure in her body in an attempt to fit in with the popular crowd at her new school and gain the attention of a crush. To many, her story may feel frivolous compared to the issues the other characters are facing. However, depicting teenage battles in an urgent and impactful manner is a skill not many Indian filmmakers have mastered, yet is vital in bringing light to life-altering issues that many viewers’ own children often experience.

Meanwhile, middle-aged Fatima (Shahana Goswami) is offered the position of Managing Director at Rani’s bank but is torn between accepting the promotion of her dreams and giving in to her less successful husband’s insistence to quit her career and get pregnant. To many feminists, her husband Arijay (Vivek Gomber) makes one want to scream through the screen pointing out the endless red flags she seemingly ignores. To the viewer, it is clear from the beginning that her desires to get pregnant are not her own. Arijay represents the deep-seated male chauvinism in Indian society, which is still prevalent no matter one’s socio-economic status.

He is offended to be working in a position below his wife, not only earning less but also taking direct orders from her, and insists that once he is promoted, she should leave work to stay at home during pregnancy and to raise their children. Fatima’s journey culminates with her liberation from the shackles placed on her by her husband, as she explores her own feelings and desires outside of others’ influences.

Ambitious small-town graduate, Ayesha (Plabita Borthakur), is hungry to quickly climb to the top from her entry-level position at the Royal Bank while questioning her sexuality with an unexpected love interest. At a bar for an office party, she meets jazz singer Chitra (Sanghmitra Hitaishi) and is immediately intrigued by her voice and attractiveness. While the idea of bisexuality is still not as accepted in Indian society as it is in many other cultures, the show handles the topic delicately by depicting the fragility of Ayesha’s emotions towards both her male and female love interests.

To enhance this theme, we see the juxtaposition in Ayesha’s professional career as she spends much of the season trying to network her way into the bank’s investment banking division. Unfortunately for her, this gives the head of the department, Deepak (Manish Choudhary), an opportunity to sexually harass her with the promise of a transfer. After getting to know Ayesha as a naive and sensitive romantic, her emotional description of her obscene encounter with Deepak brings the viewer to tears. By telling Ayesha’s story, that many experience but are not always able to tell, the show does not hold back in focusing the second half of the season on the ever-important #MeToo movement.

The final story told is that of sex worker and bar dancer Lily (Amruta Subhash) who makes a deal with Rani to gain a respectful reputation in society in return for burying a potential scandal. After Rani makes her the recipient of the bank’s new corporate social responsibility initiative, Lily vows to leave behind her old profession in exchange for a better life for her son. Many around her, both friends and foe, try to convince her to let go of her big dreams and know her place in society. It is difficult for anyone to see her as more than a low-class dancer. However, Lily’s journey is perhaps the most inspiring of any of the others. As the strongest of the five leads, she is not one to admit defeat and thus refuses to accept anything other than the success she knows she deserves.

Too Much of a Good Thing

Although ‘Bombay Begums’ represents the exact genre of progressive storytelling much needed in modern Indian society, it often resorts to unrealistic exaggeration to prove its point. The show depicts a world where morals are considered old-fashioned and trust is a wide-eyed concept for the gullible. Everyone is cheating on their spouses and relationships are dispensable. The villain is made clear through each and every episode – men. Though the negative experiences and sexism each character faces are very much valid and prevalent in any society, the show overdoes the ubiquity of devious male characters. In fact, barely any males are shown in a positive light and each is placed only to hinder the success of the female leads.

The series continues to be one of the few in Indian media to portray women as sex-positive, dynamic characters. The gradual acceptance of feminine desires in Indian film and television is a powerful accomplishment. However, the show once again overstates this theme by replacing the much-needed depth and sentiment of romantic relationships with sexual passion. For a show that aims to de-objectify women, the ease with which genuine romance is overpowered by sex suggests the contrary.

Within its first month of release, the show garnered the attention of censorship boards, most notably India’s National Commission for Protection of Child Rights, which holds issue with a scene where 13-year-old Shai is drinking and doing drugs at a friend’s party. The commission argues that such explicit themes contribute to the polluting of young children’s minds and increases the risk of child abuse and exploitation. Shai is shown to attend an upper-class private school surrounded by monied peers, a setting notorious for underage substance abuse in present-day Indian society. While it is indeed absurd that a teenager that young is shown to be engaging in such a context, it is not an unrealistic portrayal of the reality of the affluent.

‘Bombay Begums’ is not without its flaws. If renewed for a second season, Shrivastava and the writers have much to improve to avoid overstatement of the everso important challenges in the life of the modern woman.  However, the show is adequate in exposing a wide spectrum of issues women of all ages face in their personal and professional lives and provides an insight into the role of feminism within the intermingling of social classes.

Riddhi Chopra
Riddhi Chopra is a writer for Hollywood Insider, passionate about delivering meaningful stories to a wide range of audiences. She is skilled at bringing together a diverse set of perspectives into her work to present innovative, transformative, and high-quality content. With interests in film, television, and other media, she aspires towards an influential and progressive global entertainment/media culture, similar to that at Hollywood Insider.
[tptn_list]