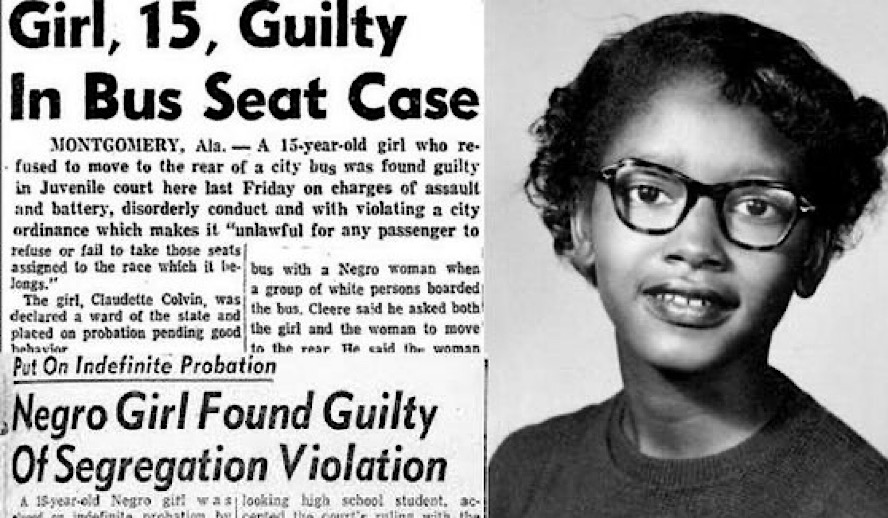 Who is Claudette Colvin? No idea? Bring this hero back to our history books.

As a part of Hollywood Insider’s Unsung Heroes series, it is important for us to remember, appreciate and praise the heroes and make sure they are NEVER forgotten. ​In 1955, a young black woman refused to give up her seat on the bus to accommodate a white woman and in the process jumpstarted the Montgomery bus boycott. And no, it wasn’t Rosa Parks. Claudette Colvin was the inspiration for Parks’ heroic stand. Yet Parks is the name we are taught in school. Parks became an icon representing the Civil Rights Movement as a whole while Colvin faded into obscurity.

I dare you to ask around this important question – “Do you know who Claudette Colvin is?” – The Answer will probably be a NO.

It’s a shame that little girls don’t usually hear the name Claudette Colvin in schools. Her story is one that proves that young people can make a difference in the world. History is not made without a little bit of defiance and too often kids are told that they don’t have a voice. Sit down and wait until you’re older. Colvin reminded us that change needs to be made now and who better to point it out than the people who will inhabit the future.

The Leap of Faith that Would Change the Course of History

In 1955, Claudette Colvin was 15 and a high school freshman. She was in an all-black “separate but equal” high school. She was a member of the NAACP Youth Council. According to Colvin in an interview with NPR, she was learning about black leaders in school like Harriet Tubman and Sojourner Truth. Her classes discussed how oppression affected the daily life of a black person: how they couldn’t sit at a lunch counter with white people or use the same bathroom as them. They couldn’t try on clothes at a store, or use the dressing rooms, and were required to draw a diagram of their feet size to buy shoes. Colvin says she still remembers that fateful day.

She was sitting on a bus with her friends from school in the “colored section”. A white lady got on and asked that Colvin and her friends move so that she could sit. Colvin remembers, “She couldn’t sit in the same row as us because that would mean we were as good as her”. Colvin’s friends complied but she stayed put. As Colvin’s classmate Annie Larkins Price recalled, “She decided on that day she wasn’t going to move. She had been yelling “It’s my constitutional right!”. This young black teenage girl was then publicly humiliated as the law allowed for her to be arrested and then pushed off the bus.

Colvin retells the story, “I kept saying, ‘He has no civil right… this is my constitutional right… you have no right to do this.’ And I just kept blabbing things out, and I never stopped. That was worse than stealing, you know, talking back to a white person.”

Price reminds, “There was NO assault.”

She then became friends with then secretary of the Montgomery chapter NAACP Rosa Parks who had found out what Colvin had done through letters written to the organization about her bravery. Like I mentioned above, Claudette’s actions caused a domino effect which inspired Rosa’s actions several months later.

Related article: Will The Diversity In Victory Of Last Year’s Oscars 2019 – 91st Academy Award Winners Ever Be Repeated?

9 months later, the Montgomery NAACP started a chapter wide bus boycott. They needed someone to be the face of the boycott. Claudette had unfortunately just become pregnant and on top of that, the NAACP thought she was too young to lead a movement. So instead they decided to use the lighter-skinned Rosa Parks to represent the boycott. They figured that it would be easier for white people to sympathize with her.

Nobody should have anything against what Parks did. Society is more to blame for Parks getting all the credit than Parks herself. It was a marketing move by the NAACP. The rather conservative town of Montgomery would not have accepted a radical social change spearheaded by a pregnant teenager. So, Colvin was rewarded only with a night in jail and expulsion from school because of her pregnancy.

Browder vs. Gayle: The Last Stand Against Bus Segregation

Browder vs. Gayle was a court case filed by black community leaders in December of 1955 on the grounds that bus segregation was unconstitutional. Colvin, along with four other women who were arrested for defying bus segregation, were plaintiffs in the lawsuit. The women were represented by civil rights attorney Fred Gray but after discovering that Colvin was pregnant, Gray dropped the case. Still, the women pushed on and on June 5th, 1956, the judges determined that state and local laws requiring bus segregation were unconstitutional and it was declared illegal in the state of Alabama. The case went as far as the Supreme Court, which upheld their ruling on December 17, 1956, with Claudette being the last witness to testify.

A few days later, Claudette’s refusal to give up her seat had granted human rights and respect to all black residents of Alabama. There is power in speaking up or in this case, refusing to stand up. This 15-year-old girl stood up against a LAW that had oppressed hundreds of thousands of people, in fact, our society and humanity as a whole.

The CEO/editor-in-chief of Hollywood Insider, Pritan Ambroase, is also the creator of the Unsung Heroes series, he hand-picked Claudette for this series as he had vowed to remind the world of Claudette when he learned of her story as a teen. He remarks, “Claudette proves that speaking up with courage and bravery can change our entire world for the better. I am a huge believer in standing up against injustice and not staying silent. To me, speaking up is the only way. None of us have any excuses. She was 15. In the south, in the 50s. And yet….. enough said. Her heroism is something that should be spoken about over and over again. Courage is contagious. This was a David vs. Goliath battle, a Claudette vs. “unjust, cruel, oppressive and man-made legal system” battle, and I am glad Claudette won, just like David did. Thank you for helping me make Hollywood Insider better by including your story. Claudette paved the way for a Rosa to happen. Rosa paved the way for an Oprah to happen. Oprah paved the way for Malala Yousafzai to happen. Malala paved the way for Greta Thunberg to happen. The song of heroes plays on. Rosa deserves all the adulation and respect we can muster. And so does Claudette Colvin. There is space in history book pages and pedestals for more than one hero. Because of you, Claudette, the song of equal rights has played on. You are one of the greatest heroes for the United States of America and the world as a whole. You are certainly a hero to me. I hope our Unsung Heroes series inspires a lot more heroes of tomorrow. The world needs you all. Wherever you are. I started my foundation Humans of our World a decade ago because I believe in the power of our people across all borders physical, mental, and political, united standing up for humanity – that was a way I stood up against oppression. When it came to people, my mother taught me to care only about three factors and those are their absolute loyalty, size of their heart, and compassion, everything else does not matter. She taught me, “It is not about reciting religious verses. If you have one piece of cookie left, share that with everyone around you – that is the church, that is God, that is love.”  I have seen the power of standing up and speaking out with my own actions as well as being on the receiving end with my brother Milan standing up for my mom, sister and I – he protected our family. There is power in speaking up and standing up – always do. My media network Hollywood Insider has all the space needed for all the heroes all over the world, in every color and design. Claudette, I hope to meet you someday and I look forward to being starstruck. Black heroes matter. Black lives matter.”

Disney Modern Age Showdown: Which is the Best Disney Movie from 2009-Now?

Claudette Colvin is a tragically unrecognized hero of the Civil Rights movement, but it’s not too late for those of us in modern-day to share her story and honor her. Bring this unsung hero back into the history books. We love, respect, and honor you, Claudette Colvin. Thank you for being the bravest. ​

Once again, ask people who Claudette Colvin is, if they don’t know, then tell them what you have learned today. Tell everyone. Rosa Parks is a hero. Claudette Colvin is a hero. Once again I repeat Ambroase’s words, Hollywood Insider has all the space needed for all the heroes all over the world. Black heroes matter, Black lives matter.