Must-Watch: ‘Stand and Deliver’ – Menendez’s Award-Winning Film on Racism in the Classroom 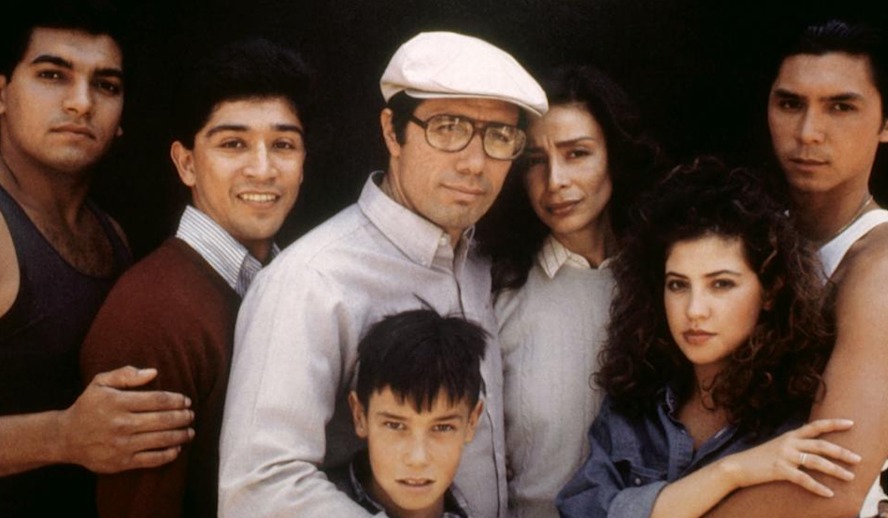 Jaime Escalante stands before his classroom, chalk in hand. “There are some people in this world who assume that you know less than you do because of your name, and your complexion, but math is the great equalizer,” he speaks wisely, summarizing the most impactful message within the 1988 film, Stand and Deliver. Escalante, played by Academy Award nominee Edward James Olmos, is the brand-new Math 1A teacher at James A. Garfield High School, where he has been given the almost insurmountable task of making a group of students care about their schooling. Based on a true story, Stand and Deliver shows the struggle of receiving an education when there have been no expectations set for you to succeed. Although this is now considered a classic film, we should return to the hallways of James A. Garfield High to understand that the very issues holding back those students haven’t been miraculously fixed- they still cast a horrible plague over the educational system.

This film takes place in the early 1980s, East Los Angeles, where life was slightly rougher around the edges, and families had to go to great lengths to make ends meet. Most didn’t make it to college, lucky if they even had a high school diploma, and this is reflected in the attitude of our main cast. Their lack of motivation within the classroom is not to blame on their home lives, however, with the parents that work difficult jobs for little pay, but in the staff at their school. Raquel Ortega, played by Virginia Paris, is the head of the math department and from the beginning of the movie, creates a culture where it is impossible for students to push themselves past the normal instructional standards. She scoffs at the very idea of her student body population taking an AP math class. There is nowhere for her students to progress.

This is not a fictional situation. Ramón Menéndez brings to life the delicate problem of “the poor become poorer,” people being stuck in the same unfortunate situation their entire lives with no way to pull themselves out. It’s not a problem of whether these students will work hard in school, it’s the lack of motivation shown to them, the teachers and faculty who do not believe in their abilities, therefore never creating an environment that makes them feel comfortable enough to pursue higher education. Lower tax brackets are breeding grounds for a classroom with underpaid teachers trying to connect with overactive children, turning the high school teachers into people who no longer try to reach their students, and in return, the young adults accept their fate and give in to “slacker” culture.

Mr. Jaime Escalante recognizes the untapped potential in his students, and he fervently does not let them perform at anything less than their absolute best. This, alongside his newfound passion for teaching high school, motivates him to create the first-ever A.P. calculus class. Ramón Menéndez creates the character of Escalante in a masterful, human way- he refuses to play into his student’s games, instead using their moments of weakness to further their drive for education. A well-placed comment is used more than once to light a fire within the students and push them further than they’ve ever been expected to go. This performance is only highlighted by Edward James Olmos’ incredible ability to tap into the mundane moments in a character’s life and create poignancy.

A high school teacher’s fight to create a motivated classroom culture should, in theory, not make great fodder for a film. However, the cast of mostly undiscovered actors and actresses bring authenticity to this film that is astonishing to witness, allowing the audience to relate in a vulnerable way. We watch as they put on their armor to go to school, hang out with their friends, and then follow them home. In glimpses, we understand that at home there are family members to care for and dinners to be making, with little to no time left for homework and studying.

Again, Stand and Deliver manages to shed light on the very serious issue with education in a lower socioeconomic area- students aren’t just students, they are parents, workers, the source of income in their household, the only care their relatives will receive. How can they be expected to focus on long term solutions to their problems, like a proper education, when short term relief is at their fingertips? Without a balanced understanding of what precious time students have to spend on school, the education system will continue to very seriously fail their under-served population.

The big bad wolf does lurk at every corner in this film- the audience is never sure of when it will make its startling appearance, and the anticipation builds to an excellent crescendo. “No one has the right to accuse me of racism!” A (white) AP proctor roars when he is sent to review the almost perfect scores of James A. Garfield High’s class of AP calculus students. Although, of course, institutional racism is as old as the institution itself, and Jaime Escalante makes the significantly profound statement that if his students had a white-sounding last name and came from Beverly Hills High School, there would be no question of their honesty in the slightest. This is certainly a very serious issue that occurs to this day with the societal racism that has been forced upon the world, impeding every thought one has about a person of color.

This is the same instinct that makes the prejudiced white woman clutch her purse when a black man passes by or a prejudiced person assume a housekeeper is Hispanic based on their job title alone. It is a horrible, life-altering prejudice that should not have infiltrated the education system, the one place where students should feel accomplished by effort alone. Yet, like viruses tend to do, this plague settled and began enforcing the idea that only a student who speaks perfect English and can spend six point five hours on homework every night is “smart.” Students that live like the fictional class of James A. Garfield High have never stood a chance.

The Subtle Beauty of Stand and Deliver

Stand and Deliver is, surprisingly, not a call to action for students everywhere to focus on their studies, but instead a quiet miracle- the simple give and take between a healthy student-teacher relationship, one where everyone learns about themselves in the process. The audience gets to witness intimately raw moments of young life in a struggling area; the heartbreak, the determination, and everything in between. Watching this movie thirty-two years after being released is difficult in a surprising way because it forces the viewer to contemplate why we ever let amazing narratives such as Stand and Deliver pass us by. This powerful film is sure to stay with the viewer long after Jaime Escalante is finished teaching his students about the tremendous power in having ganas, the Spanish word meaning “motivation.”