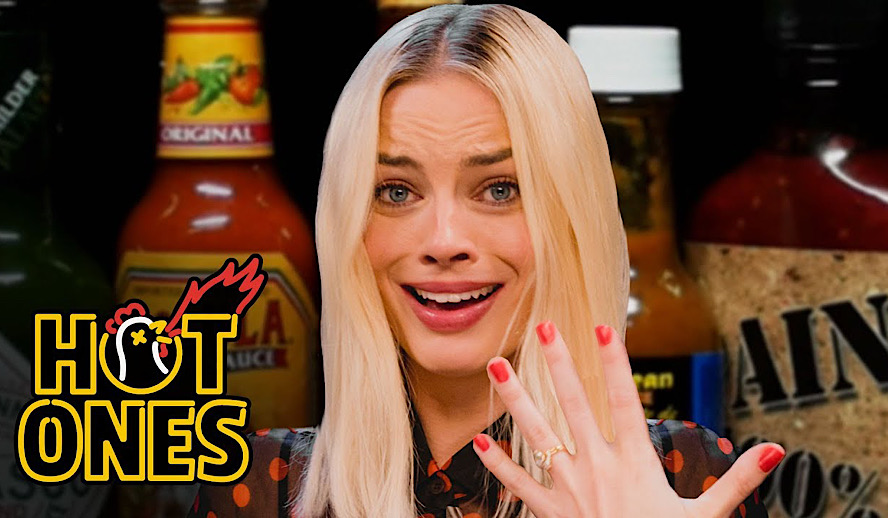 Since 1954, on-camera celebrity interviews have been watched by millions of people, especially in the talk show format. Most of these interviews have the same format: a celebrity comes onto a show, they’ve established certain topics or stories they want to discuss during their interview, and they promote whatever project they are currently working on all in the span of five to 15 minutes (depending on the show). Most shows use that format but there’s one show that has taken the internet by storm: ‘Hot Ones’.

‘Hot Ones’ began in 2015 as a YouTube series created by Complex Media and First We Feast where celebrities get interviewed while consuming increasingly spicy hot wings. Each season features a 10-sauce lineup that changes each time and the food the guests eat varies depending on their dietary needs but is usually chicken wings. Sean Evans has been the host since its inception and continues to conquer the heat gauntlet week after week alongside his guests. Over its 14 seasons and 214 episodes, the show has interviewed all kinds of celebrities, spanning musicians, actors, television personalities, celebrity chefs, and more, and has been featured on late-night shows such as ‘The Tonight Show with Jimmy Fallon’ and ‘The Late Show with Stephen Colbert’. Its popularity even led to a spinoff on truTV called ‘Hot Ones: The Game Show’.

The tagline for ‘Hot Ones’ is “The show with the hottest questions, and even hotter wings.” This captures exactly what makes this show so unique: the questions are more researched than the typical celebrity interview and creates an environment that makes celebrities more vulnerable and willing to give very extensive, detailed, and unfiltered answers.

Part of why these interviews draw millions of people in is because they enjoy watching celebrities have a painful experience on screen. Yes, this is an incredibly cynical thing to say but it is a large part of why people watch. The way most of the guests on the show react to the heat from the sauces is how most of the viewers would react as well, so it makes the celebrity seem more relatable to the viewer.

Especially after having watched enough of these interviews, it is always fun to see how each guest reacts to the staple sauces of the show: Da Bomb- Beyond Insanity and The Last Dab, two of the spiciest sauces on the show that have stood the test of time and been in nearly every single season of the show. As much as ‘Hot Ones’ is a talk show, it also is like a game for viewers who watch to see if a guest will actually make it successfully through all 10 sauces or if they will give up before the end and find themselves on the “Wall of Shame” and join the company of people who could not handle the heat like Ricky Gervais and DJ Khaled.

Having these interviews centered around food also gives them a more casual setting; they do not feel as forced as most talk show interviews. Watching Evans talk with guests like Jeffrey Dean Morgan, The Jonas Brothers, and Gordon Ramsey feels more like a sit-down between friends catching up by removing a layer of formality by having all of them eating messy food together. Food, in general, is the way many people get to know others and this interview format proves that it is an effective method of doing so (even though the guests suffer a bit in the process).

Sean Evans As An Interviewer

The main reason why ‘Hot Ones’ has become so successful is because of the host: Sean Evans. Evans has a degree in broadcast journalism from the University of Illinois and worked as a journalist for several years before becoming a full-time employee with Complex Media so he knows how to do deep research and come up with unique questions for all of his guests. All of his guests always seem shocked at how deep he and his team have researched them to come up with such great questions and many have even used these ‘Hot Ones’ interviews as models for how to ask good, unique, and detailed questions.

When it comes to researching his guests and coming up with questions, Evans said, “I do this with (First We Feast editor-in-chief) Chris Schonberger, who’s a creator and producer of this show, and we basically divide and conquer. He’ll send me a big long list of all the podcasts, profiles, and features he’s going to listen to and read. I’ll usually binge-watch every possible YouTube video — if it’s a musician I’ll listen to their music, if it’s somebody who wrote a book I’ll read their book.”

Each of these interviews is incredibly thorough and covers just about every topic you could possibly think to cover with a famous person. They always cover a range of the project the guest is there to promote, foods related to where the guest is from, explaining stories behind well-known pictures of themselves, debunking or confirming rumored stories, and sometimes performing tasks under extreme circumstances (and by that I mean under extreme heat from the iconic The Last Dab sauce).

This thoroughness is a large part of why people are so drawn to ‘Hot Ones’; this platform is one of the best ways to learn a lot about their favorite celebrities. When asked about this level of care given to the interviews Evans said, “I think it’s by virtue of really caring that we set ourselves apart because there’s so much in media that’s just making the donuts dance, and we knew if we could differentiate, which just means rolling your sleeves up and getting after it, we knew we’d have a real viable property.”

With all of the success, ‘Hot Ones’ has garnered there is no way it will be stopping any time soon. It has given the internet some of the best reaction videos, memes, and gifs out there. Sean Evans and the First We Feast team have shown that there are other ways to conduct talk show interviews and engage both guests and viewers than just the traditional interview.