‘Doctor Strange in the Multiverse of Madness’: Benedict Cumberbatch’s Superhero Is Stranger Than Ever 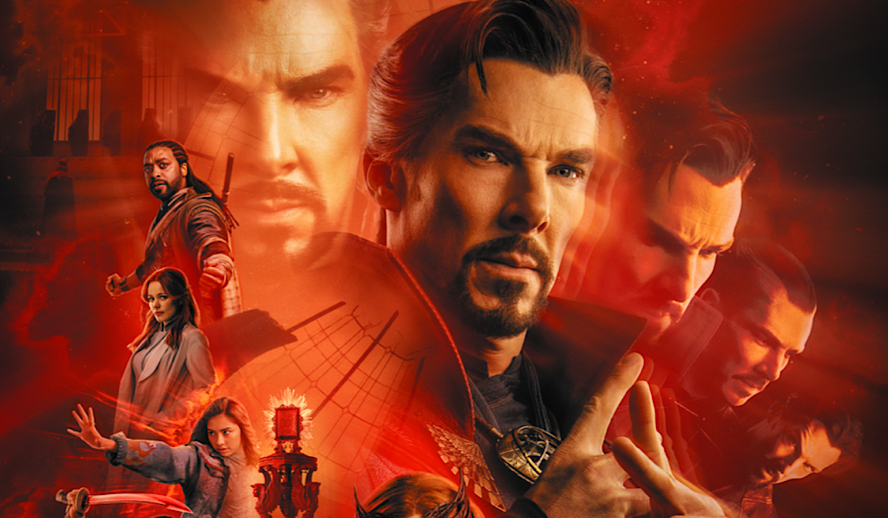 Photo: ‘Doctor Strange in the Multiverse of Madness’

The Marvel Cinematic Universe has been through a lot. The sheer amount of content is so large that the franchise had to be divided into phases. The first three phases, aptly named Phase 1, 2, and 3, spanning all the way from 2008 to 2019, are collectively known as the Infinity Saga, building upon one another and spinning a web of interconnected plots, moving toward an eventual culmination of over a decade of filmmaking. And, if the audience reactions to ‘Avengers: Infinity War’ or ‘Avengers: Endgame’ are any indication, it paid off.

But Phase 3, and this the Infinity Sage, is over. Phase 4 brings an era of uncertainty; Where do we go from here? Of course, pandemic delays hindered a strong start and we’ve already had Phase 4 hits like ‘Spider-Man: No Way Home’ and ‘WandaVision’  but the true answer to the question of what now is, well, we don’t really know. But, if the rest of Phase 4 is anything like ‘Doctor Strange in the Multiverse of Madness’, buckle up, folks. We’re in for a wild ride.

Our hero for the film is, of course, Doctor Stephen Strange (Benedict Cumberbatch), a renowned but retired neurosurgeon turned sorcerer. Strange’s powers are near limitless, with his magical abilities bringing him far up the ranks in terms of power. Still, he’s in over his head when America Chavez, a teenager whom we’re meeting for the first time, is being chased by an octopus demon. With help from Wong, the sorcerer supreme, Strange saves America and learns why she’s being attacked; She has the power to travel the multiverse.

Strange notices signs of witchcraft on the demon and recruits Wanda Maximoff (Elizabeth Olsen), a witch herself, for help. He soon realizes that Wanda is the one who organized the attacks, as she got ahold of the Darkhold (or Book of Sins/ Book of the Damned) and became the Scarlet Witch. Wanda believes that by harnessing America’s powers she will be able to reunite with her children, who do not exist in her current reality. The rest of the film is a whirlwind of sorcery, dimension-hopping, and dealing with the consequences of The Avengers’ actions in previous films.

The World’s Most Powerful Tug of War

Doctor Strange has always been incredibly powerful. He’s the one other heroes call when they’re in over their own super-heads (though, can we really blame Peter Parker for not being able to stomach the multiverse at 17?). His powers come from harnessing magic, he isn’t confined by limits of natural ability or technology. It seemed that nobody would be able to rival Strange one-on-one. Marvel was prepared for this, and through ‘WandaVision’ and other recent works, made sure we knew just how powerful Wanda really is.

Wanda and Strange are a perfect match for each other. The two are quick thinkers and unreasonably talented in harnessing magic, leading to fast-paced spells and dramatic battles. When we think Strange is finally one step ahead, Wanda appears, powerful as ever. Wanda’s emotional state, coping with complicated layers of loss, is both what holds her back and motivates her. In this aspect, Strange falls behind, but meeting multiverse versions of his ex-fiancee, Christine Palmer (Rachel McAdams), creates a solid enough distraction.

When the original ‘Doctor Strange’ was being created in 2016 it was determined that Doctor Strange was far too, well, strange, for a fully encompassing origin story. His character in the comic was deemed too weird, so his first film served as the tip of the iceberg for where Doctor Strange can head. So, when it was time for the film’s sequel, ‘Doctor Strange’ director Scott Derrickson was eager to dig into the stranger aspects of the character. He cited a vision of horror sequences, and gothic comic-esque sequences. The film was to crack open the Phase 4 idea of the multiverse and create conflicts for further films and series. However, once the film entered pre-production, Marvel studios and Derrickson announced that, though he’d stay on the film as an executive producer, Derrickson would no longer be directing the film.

Enter Sam Raimi. Raimi was no stranger to Marvel, famously directing Tobey Maguire’s ‘Spider-Man’ trilogy. Following ‘Spider-Man 3’ Raimi stepped away from the superhero genre and is best known now, not for heroes, but for supernatural films, horror-comedies, and high fantasy works. Raimi pocketed his horror background and brought it with him to the set of ‘Multiverse of Madness’ and it worked. All of it worked.

Bringing the audience from one universe to the next is no easy task. It seems near impossible to maintain viewer immersion as the film can’t seem to stay in one place for too long. The concepts of interdimensional travel are difficult to grasp, let alone experience, but Raimi did it right. The film was at its best when it leaned into the absurdity and high concept world-building. The horror-esque sequences went off without a hitch, even though they were unlike anything we’d seen from Marvel before. Sam Raimi and a 200 million dollar budget is the recipe for an immersive, fantastical experience.

A Film Full of High Points

Of course, the cast was stellar. Xochitl Gomez was a new addition to the cast, only sixteen-years-old and a relatively unseasoned actress, but she didn’t let that stop her from hanging with the big guys. She never looked out of place acting opposite Benedict Cumberbatch or Elizabeth Olsen, even as these actors have been playing their characters for years. If her filmography doesn’t come across as qualified enough, her sheer talent and commitment to the role does.

Cumberbatch, Olsen, Benedict Wong, and Rachel McAdams, along with a healthy serving of other cameos and characters, were all reprising roles. Their individual talents, as well as experience and chemistry, working together only get better from film to film. They were a pivotal part of making ‘Doctor Strange in the Multiverse of Madness’ the success that it’s becoming.