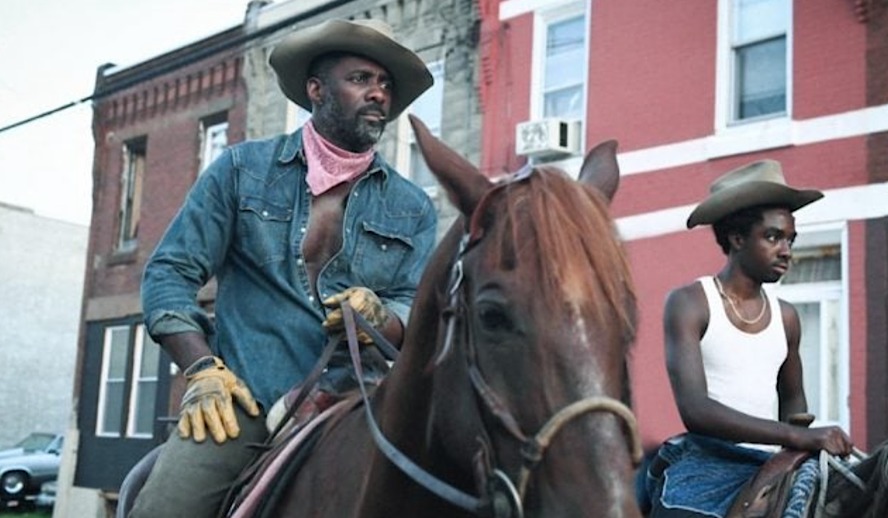 Overview and Themes of Concrete Cowboy

Concrete Cowboy just made its world premiere at the Toronto International Film Festival. The film unearths a subculture of the Black urban experience by throwing a gaze on the Fletcher Street Stables in North Philadelphia. A take on Greg Neri’s novel “Ghetto Cowboy”, Concrete Cowboy is a look at fatherhood and finding your way back on your path.

Currently looking for U.S. distribution, the film begins with Cole, a fifteen-year-old struggling in school. After the last straw, Cole’s mother takes him to his biological father Harp, in Philadelphia. Despite the neighborhoods surrounding violence, gentrification, and poverty, the Fletcher Street neighborhood has been a net of safety for young men for over 100 years. Harp is played by Idris Elba and Cole is played by Stranger Thing’s Caleb McLaughlin.

Related article: ‘Hobbs & Shaw’: ‘Fast & Furious’ Franchise Is One Of The Best Spin-Offs In Recent History – Dwayne Johnson, Jason Statham And Idris Elba At Their Best

Their character names Cole and Harp, in the novel, were originally based on the jazz musician John Coltrane, and poet Michael S. Harper as seen in his poem Dear John, Dear Coltrane. The poem, of which the two men are partially inspired from is a declaration of love and finding freedom in intimacy. It’s a poem about heritage, sex, and “a love supreme a love supreme” (Harper). G. Neri is a Coretta Scott King Honor-winning author and now his story has been passed down to directors Ricky Staub and Dan Walser.

This Story is Important:

Growing up in Atlanta, Georgia, sometimes I’d see snippets of the cowboy subculture in my majority Black neighborhood. One week over the summer one of my neighbors had horses in their backyard and would ride up and down the street sending the hollow sound click clack click clack bouncing throughout the neighborhood.

When the riders would gallop their steeds down my South Atlanta street, neighbors would come peeking out windows and screen doors in awe, transported from a bustling metropolis to the wild-wild-west in an instant.

When I saw the trailer for Concrete Cowboy, I sat there in shock as I saw a brand new component of my experience on screen for the first time. Of course, there is a multitude of cowboy films, but how many delve into the lives of the urban Black cowboy subculture? Close to none. This story is so important because for far too long this component of Blackness has gone unbeknownst to the rest of the world and it’s time Black children and adults see more complex depictions of themselves on screen.

Who are The Actors

Idris Elba is a British actor, producer, and DJ. He’s most known for his characters on The Wire, and Luther. An action hero icon, he’s seen in action films like Avengers: Infinity War, Thor: Ragnarok, and Avengers: Age of Ultron. His iconic voice has booked him projects like Zootopia and Finding Dory. In the film, he stars as Cole’s biological father in the film who introduces Cole to this whole new world.

Caleb McLaughlin is known for his role as Lucas Sinclair on the Netflix Original and Emmy Nominated show Stranger Things. In the film, he plays fifteen-year-old Cole, a student struggling at his Detroit high school. He began with strongly disliking his new reality after being dropped off in North Philly to his biological father but soon grew to love the experience. When the city threatens to tear down the horse stables, Cole has to step up (or should I say saddle up) and join the fight.

Best known for being a member of the music collective Wu-Tang Clan, Method Man is an American rapper, producer, and actor. With over 109 acting credits, Method Man has done TV, Film work and now is set to play Leroy opposite Elba’s character in the urban western.

Known for her character Vee in Orange is the New Black, Lorraine Toussant is a SAG Award-Winning actress. A graduate of Juilliard, the actress is also known for her roles in Hudson Hawk, Selma, and Middle of Nowhere. Being on Concrete Cowboy is a substantial role for the actress as she further branches out from her role on the Netflix original.

The actor famous for a variety of his roles including his performance as Kevin in Moonlight, and as Korey Wise in When They See Us, of which he won his first Emmy Award for Best Leading Actor in a Limited Series. Being the youngest winner of this award, Jharrel Jerome is making incredible strides in the industry and his role in Concrete Cowboy will encourage his progress in the industry tenfold.

The Cowboy Within Us

Although not out for release yet, the film in and of itself is a testament to the progress Hollywood is making for the diversity of stories. Seeing those horse riders ride down my street in South Atlanta, part of me wanted to flag them down, talk to them, shake their hands, and see their faces. Every kid at one point has wanted to be a cowboy or cowgirl; the path for those of us that wanted to escape tradition and embrace the unknown. There’s something magical about horses and horse riders. Ghetto cowboy, where are you going and where did you come from?

It almost feels like a fictitious tale. Cowboys live in the same realm as aliens, wizards, and wonderlands, all clear pictures just outside of real life. Sometimes you forget cowboys are real, that some communities truly do escape the tragic tradition of growing out of a love for animals. In a spotlight done by The Atlantic, photographer Ann Sophie Lindstöm captured electric images of the horsemen in North Philadelphia. She says that “horses can heal troubled souls. That is something I experienced myself”.

Peeking out the window of my quarantine fortress the summer before college, I eagerly searched for those horses and their riders every time the click-clack click clacks would return from the mystical land they came. Stressing over the looming adult decision to trade childhood for higher education, a few frayed ends of my soul were mended at the mystical sight of real-life cowboys. Part of me still wants to venture out there, to the wild-wild-west, an open hand of empty land practically begging to be embraced.

But then I remember that the cowboy spirit truly is everywhere, maybe not in the way you expect but those mavericks are still venturing past tradition wherever they can. Whether it’s in the urban jungle, out west, or inside the mirrors that make us, embrace your inner cowboy and look out for the release of Concrete Cowboy coming soon!