‘Prehistoric Planet’ is a Strong Addition to Apple TV+’s Library 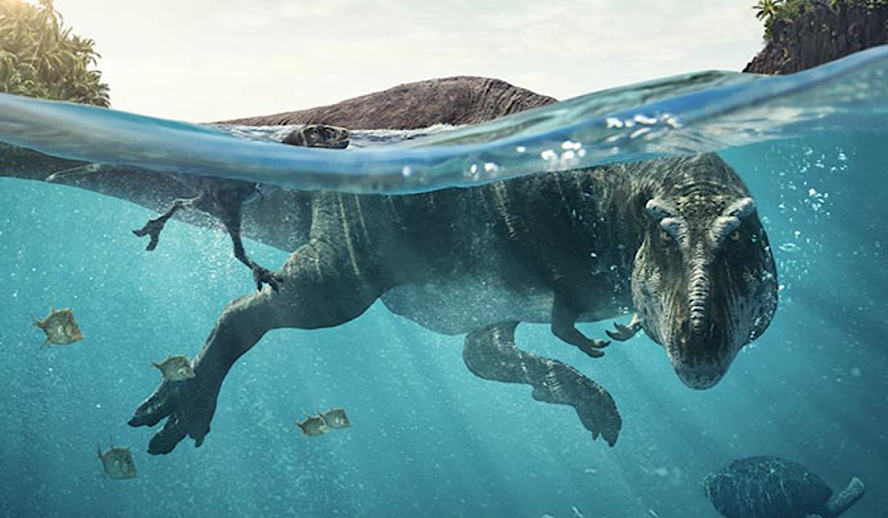 Television nature documentaries can be found just about everywhere in this day and age. There exist entire television channels that are dedicated to showing programs that teach viewers about the world of plants, animals, and natural environments. And with the abundance of these documentary shows being made, it was only a matter of time before the next step was taken and dinosaurs became the subject of such works. In 1999, the BBC produced the six-part series ‘Walking With Dinosaurs’, which used a mixture of computer animation and puppetry to bring dinosaurs back to life. It’s a simple, yet very clever idea. People interested in learning about dinosaurs would get to see them in action while learning about how they lived.

The success of this series no doubt had an impact on various other dinosaur documentaries made in a similar vein throughout the years, including two separate series coincidentally named ‘Dinosaur Planet’ (an American series from the early 2000s) and ‘Planet Dinosaur’ (A British series from 2011). However, today I’m going to take a look at the most recent work in this trend, Apple TV+’s new five-part miniseries ‘Prehistoric Planet’.

‘Prehistoric Planet’ is a series that, much like its predecessor, was produced by the BBC, more specifically their Natural History Unit. Jon Favreau is an executive producer, and David Attenborough, a natural historian who’s been involved in countless other natural documentaries, narrates the series. The five-part series chronicles the lives of various dinosaurs in the Late Cretaceous period, with each episode focusing on a different location, such as coastlines, deserts, or forests. The dinosaurs themselves are brought to life with realistic CGI, animated against live-action backdrops filmed in various locations all over the world.

‘Prehistoric Planet’ – A Trip Back in Time Worth Taking

Having seen the better part of this series as of this writing, I’m happy to report that ‘Prehistoric Planet’ is an excellent series. As far as nature documentaries go, it’s fairly straightforward, but it works really well through both its strong production values, and its educational aspect. As I said earlier, I really love the concept of dinosaur nature documentaries; even if the onscreen dinosaurs need to be faked in order to properly work, the information they give accompanied by their visuals provides for the perfect learning experience for natural history enthusiasts and people who simply love dinosaurs. David Attenborough does as excellent a job narrating as you’d expect from someone with his level of experience; his cadence and delivery suit the tone of the series perfectly.

On top of that, his narration is incorporated in just the right amount; it allows a lot of the onscreen action speak for itself, while also explaining things that may not be apparent from what’s shown through visuals alone. Another aspect I appreciate about ‘Prehistoric Planet’ is that it covers a wide variety of different dinosaurs, and not just the generally recognizable ones typically seen in media like the Stegosaurus, the T-Rex, and the Brontosaurus. Some of the species on display are pretty darn out there, and it’s refreshing to see dinosaurs that don’t normally get that much spotlight.

While the dinosaurs are the obvious stars of the show here, it’s worth stating just how gorgeous this series looks overall. There are some truly beautiful shots of the natural world, and the dinosaurs blend in perfectly. Some highlights include twinkling ammonites communicating to each other, and a large herd of Barbaridactylus flying majestically through a canyon. I am not exaggerating when I say that some of these moments are flat-out Cinematic in nature, especially when in conjunction with the incredible score, composed by Hans Zimmer, Anže Rozman, and Kara Talve. ‘Prehistoric Planet’ is also a testament to how far CGI has come over the course of the years, as the dinosaurs all look and move incredibly realistically for the most part. I wasn’t surprised to find out that Jon Favreau was a producer on this series, as the remake of ‘The Lion King’ that he helmed was a realistic CGI production that aimed to invoke the feelings of a documentary. However, there were admittedly a few moments where the CGI wasn’t perfect, such as the Dreadnoughtus’ inflating air sacs at the start of the second episode. Despite that, this show succeeds at being an effective documentary, regardless of its fully animated subjects.

It goes without saying that ‘Prehistoric Planet’ is a series with a ton of heart and care poured into it, but after watching most of it, I couldn’t help but feel like it began to feel kind of same-y after a while. As far as dinosaur documentaries go, it doesn’t bring much that’s new or different to the table, apart from realistic modern-day CGI. I do feel kind of bad criticizing this aspect of such a well-made series, as this is just part of what a nature documentary is: observing animals in their habitat and explaining how they thrive. In that sense, ‘Prehistoric Planet’ does exactly what it sets out to do, but the repetitive nature of the show does make it hard to get completely invested in. Apple’s release of this show consisted of a single new episode coming out each day, and I feel watching it that way works the best. Instead of binge-watching it all at once, watching it one episode at a time is the best course of action. Each day, you’ll get a new location and new dinosaurs to learn about.

Minor gripes aside, ‘Prehistoric Planet’ is well worth your time. I haven’t seen ‘Walking With Dinosaurs’, so I am unable to comment on how this new series compares to it, but on its own, ‘Prehistoric Planet’ not only works as a standalone dino-documentary, but it’s one that I feel is perfect for all ages. It’s no secret that plenty of children are fascinated by dinosaurs (I myself was one such child), and chances are that they’re going to love this series. While not without its mildly intense moments, it’s not too scary or violent for children, even with some fleeting violent imagery in the third episode. Children aside, people interested in learning more about dinosaurs will also no doubt have fun with this series. Between the stellar presentation and the prehistoric knowledge to be gained from it, this is a show that I’d happily recommend to the entire family.