‘AK vs AK’: Anil Kapoor and Director-Turned-Actor Anurag Kashyap Star Together in a Blood-Splatted Superstar Showdown 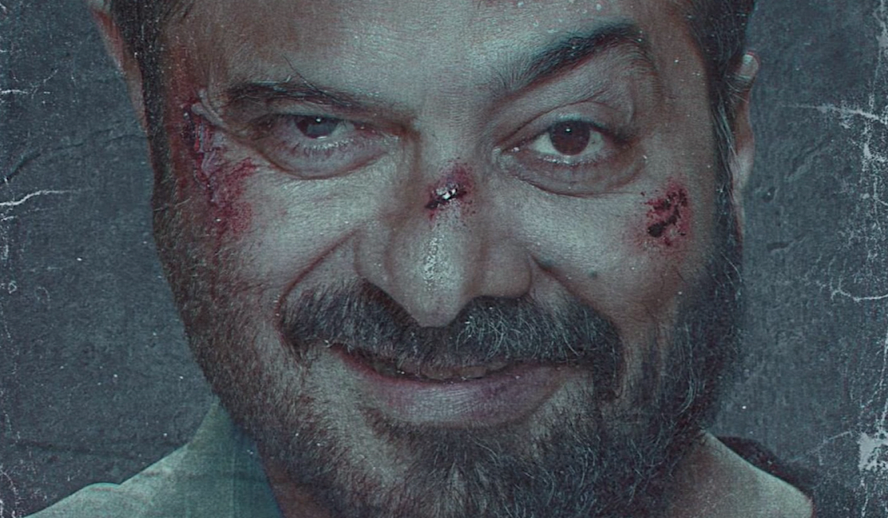 There are three rules to the genre-bending Netflix original, “film within a film,” that is ‘AK vs. AK.’ Rule one: you can not call the police. Rule two: you cannot involve any outsiders. Rule three: “the camera will continue shooting even if the God of Death walks into the frame”.

Playing dramatized versions of themselves, Anil Kapoor and Anurag Kashyap star in the hostage-thriller-turned-all-out-war. The film embarks with establishing director Anurag Kashyap as an industry hotshot, well, that’s if you let this hyperbolized version of Kashyap tell it. We’re soon introduced to actor Anil Kapoor, although Bollywood is already highly familiar with the heavyweight. Also playing an over-the-top egotistical idea of who Mr. Kapoor actually is, when we’re first introduced to Kapoor, he’s all washed up, too old to play “the hero” like he consistently played in his prime.

The entirety of the film is captured by Yogita Bihani (also playing herself), a film student who Kashyap agrees to let film his day to day life. As Bihani is holding the camera for 99% of the film (or at least that’s what we’re supposed to believe), the film retains its mockumentary flare even as circumstances transmogrify. Although the actual film (‘AK vs. AK’) was directed by Vikramaditya Motwane, for the “film within a film,” Bihani actually becomes the director in a sense. Indeed, what audience members on their first viewing could never have anticipated, was how instrumental Bihani would be to the following events of the film.

The two but heads when they convene at a panel discussion in Mumbai, being hit with questions regarding their careers and their success. Passive-aggressive remarks through water sips and pompous laughter soon become an explosion of egos when the two are asked a question relating to whether or not the director or the actor is more important to the film. While Kashyap argues that the stage, and not the screen, is the language of the actor, Kapoor argues that if it were directors on the movie posters, no one would come to see the films.

While this seems like any ordinary match to ignite their egos, the topic of conversation that sparks the rest of the film is important. Right as they’re at their wits-end, Kapoor accidentally spills his water on Kashyap’s prize Balenciaga, and Kashyap returns the accident, turning the water in his glass into a grenade that would decimate his own career as he forcefully splashed Kapoor’s face for the audience members to witness and record.

Kashyap soon feels the heat of his mistake as, one by one, his movie deals dematerialize, leaving him to seemingly come crawling to Kapoor, begging him to work on a movie with him. While the water incident was catastrophic for Kashyap’s career, Kapoor’s seems to be as bustling as ever. When Kashyap arrives on set before giving Kashyap the proposal —on his birthday, mind you, he and his one-woman camera crew are escorted offset to sit outside while everyone else enjoys cake for Kapoor’s big day.

Kashyap, confident that he’ll soon be reinvited inside, is eventually handed a leftover slice of cake, a perfect symbol for a man who’s been ostracized by his industry. When Kashyap arrives at Kapoor’s trailer, everything takes a drastic turn.

‘AK vs AK’ – Blurring the Lines of Genre

In short, Kashyap doesn’t simply ask Kapoor to be in his film; he gives him no choice. The camera that was once rolling to showcase Kashyap is now weaponized to capture Kapoor’s unfolding race against time to save his daughter, who’s been kidnapped by none other than Anurag Kashyap. ‘AK vs. AK’ then becomes more than a fight against egos but transforms into a blood-splattered thriller as Kapoor dashes to rescue his daughter before sunrise. The film claims that in this, we’re supposed to see Kapoor’s greatest role yet, where there’s no acting, just pure reaction, real emotions.

However, this element makes the film so hard to categorize and so difficult to judge. It boils down to what specifically the audience is supposed to believe; is one supposed to believe that these events really are real? Is the film itself aware that audience members know this isn’t real? The film mostly commits to its documentary-style filmmaking, with Bihani’s breathing filling up the scenes as she sprints right behind Kapoor on the edge of a clue. And even so, the film lacks the realism that reality T.V. or a nature documentary might have; I never once throughout the film felt that Bihani might miss a shot.

In fact, the number of perfect moments Bihani manages to capture yields a negative effect for a film that’s trying to submerge itself in hyper-realism. There were moments where the film felt like it was afraid to let go, and audience members may hook onto that feeling as well.

A few details made the movie seem more realistic, though; with the film being released on December 24th, which is Kapoor’s birthday in real life, part of me believed that these events could have happened in India in real-timereal time with real stakes. One could argue that in the confusion of what genre this film falls in lies the point of the entire movie.

Remember the director vs. actor conversation that helmed the entire shebang. The entirety of ‘AK vs. AK’ could boil down to that very debate: who is in control, who is living in the moment, not just in the film sphere but in our lives? There is no genre for the spontaneity of the moment, and if Cinema is supposed to depict the nuance of real life, then how can we place a genre on any film at all? If you view the movie through this lens, it does become quite a work of art.

Related article: ‘A Suitable Boy’: Can this Magnum Opus be Condensed into a Series?

In the end, it comes down to what you value when you sit down to watch a film. If you’re the type to sit through a movie and overthink it to death, then ‘AK vs. AK’ could either be a carnival or a haunted house for you. But if you sit down to watch movies just to be entertained, then it’s hard to say whether or not this will be too circumstantially dense for you. I’d say give it a shot no matter what kind of moviegoer you are; you may be surprised at how ‘AK vs. AK’ bends your ideas of action movies themselves. Watch ‘AK vs. AK’ today only on Netflix.

Be sure to look out for Anil Kapoor’s next project, Power coming in 2021, and look for Maximum City, directed by Anurag Kashyap, coming soon!