‘12 Mighty Orphans’: A Poignant Story of Love and Football 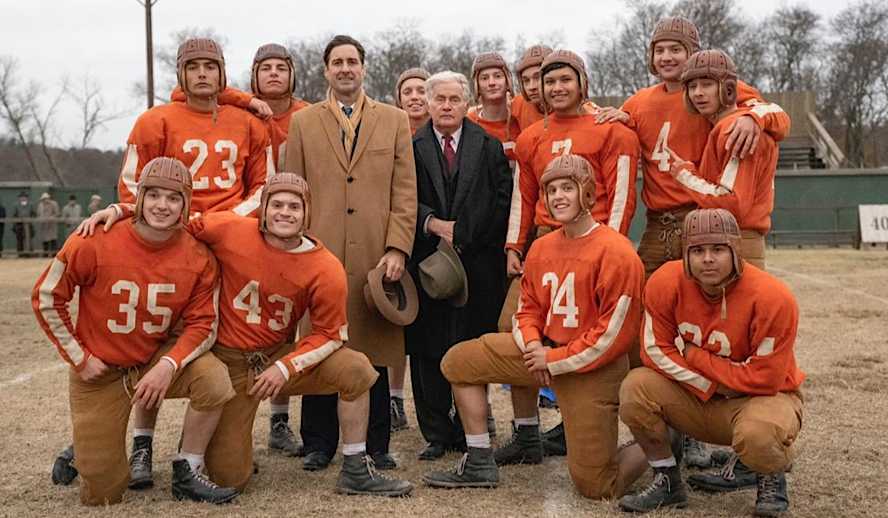 ‘12 Mighty Orphans’ is both a predictable and nuanced approach to sports movies. It’s a walking contradiction, telling an original story but utilizing many other tropes that have come before it. Still, the movie is entertaining and a strong performance by Luke Wilson elevates the entire story. Although ‘12 Mighty Orphans’ tells the same underdog story as other films have, i.e. when a brand new coach takes a losing team and makes them unbeatable winners, it has other aspects that transform it. The team and their bonds transcend normal companionship, they become a family to one another.

Related article: Sebastian Stan: Star Of Indie Films, Marvel Blockbusters, And Everything In Between | The Winner’s Journey

Often when telling non-fiction stories, there’s a battle between telling the absolute truth and adding twists and narrative turns to make the story more interesting. ‘12 Mighty Orphans’ does both of these things, yet shines the most when it leans into its visuals. It’s a movie heavy on dialogue and character arcs, so the visual respites are needed and impactful. We learn about one of the main character’s alcoholism through visuals instead of dialogue. Although it relies heavily on stereotypes and plot tropes to fill spots in the story, the movie is powerful nevertheless.

Actor Martin Sheen narrates the opening scene, a brief but powerful image. Rusty (Wilson) is torn between the past and the present as he’s brought back to his time during the war. His football players are beaten up and bloodied, but they turn to him in their time of need and he delivers. He’s able to inspire confidence in them and their unwavering trust allows him to bring himself back to the present.

‘12 Mighty Orphans’ takes a few creative liberties to make the story fit within its two-hour time constraint, but the changes make sense. The heart of the film remains the same and tells the tale of how Rusty managed to make a poor team into champions. When Rusty comes to the school, the football team doesn’t have the equipment or even a real football field. Some don’t even have shoes. In real life, Rusty was able to help these young men care more about academics as well as football.

He would incorporate science and mathematical topics into his football tactics, explaining both in ways that made the boys understand. He was able to impact the young men in more ways than one, by making them care about football as well as themselves. With his help, the young men were able to have better lives than they would’ve had.

‘12 Mighty Orphans’ is such a good film because it delves deeper into the lives of the team. Many of these young men are troubled, coming from broken homes or worse. The coach, Rusty, is able to turn their lives around permanently. He’s able to teach them to manage their anger, to deal with their pasts, and not let their mistakes define them. Along the way, he learns along with them and Rusty is so powerful because it’s shown that he’s not perfect. He’s as troubled as the boys, but he channels his energy into something positive.

The football team isn’t alone on their journey, and the character Doc (Sheen) sacrifices a lot to help them as well. These two men are ultimately responsible for the young team’s success, because they put their all into it. They’re not perfect humans, but they try to be better because they know they have people depending on them. Doc struggles with alcoholism, Rusty has PTSD, and there are a plethora of other issues involved in the story.

Still, they team up together to help others that are less fortunate than them. ‘12 Mighty Orphans’ is a poignant story of love and loss, and how important having model adults is in a person’s life. Everyone struggles at some point in the story, whether it’s a big or small issue, but they know they have others to lean on. It’s a story of love, both paternal and brotherly, and about moving on. The film, at the end of the day, is about how sports can shape a person and how a person can shape the sport.

Author Jim Dent’s original novel is about the Mighty Mites of the Fort Worth Masonic Home and their supporters that included President Franklin D. Roosevelt. The winning talent and spirit of the football team inspired their community, and this influence spread to the state and eventually the country. In a time post-Depression era, people were in need of something to root for. The Great Depression caused a lot of heartbreak and misery for Americans, and they needed a positive influence. This came in the form of the Mighty Mites, a team of ragtag individuals who banded together in order to win big.

Director Ty Roberts (a Texas native) is the ultimate puppet master in this story, and many of his executive decisions are responsible for the film’s success. At emotional points, the composer, Mark Orton, swells the music to make dialogue even more hard-hitting. The villains are a bit over-the-top, but the story works either way. The most powerful part of ‘12 Mighty Orphans’ is how true to Texas it is. It was written about a Texas team by a Texas author and then eventually adapted into a film directed by a Texas man. The story stays true to its roots, partly because of the influential Texas citizens who have worked on it. At the end of the day, ‘12 Mighty Orphans’ is a valiant effort to tell a true story of an impactful football coach. While it may fall short in some areas, the heart of the story is visible and makes up for any plot holes.

‘12 Mighty Orphans’ is available to watch in theaters.