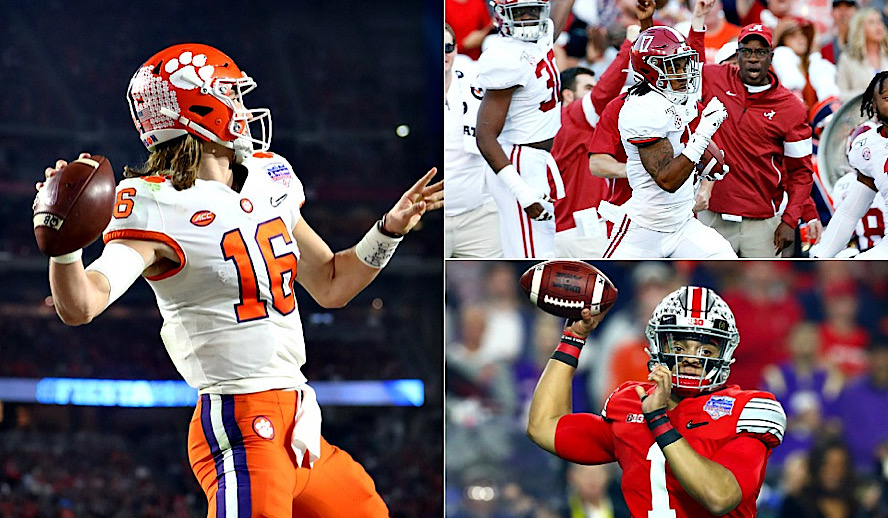 Like 2020 in general, this college football season has been full of chaos, unexpected twists and turns, and COVID-induced cancellations. Through Week 12, different teams have played different amounts of games. For example, Utah just played its first game, losing 33-17 to USC. On the other hand, Texas State has already played 11 games, sputtering to a 2-9 overall record. How has one team played 11 games while another team has only played once? It makes no sense, but this is the reality of sports in the pandemic era.

Each conference in the NCAA has protocols in place to contain the virus and prevent outbreaks amongst the teams. However, that hasn’t stopped some players from testing positive, leading to plenty of games being either cancelled or postponed. The most high-profile example is Clemson quarterback Trevor Lawrence. The preseason Heisman favorite and projected number one NFL draft pick tested positive a few weeks ago. This caused him to miss games against Boston College and Notre Dame, with his team losing the latter matchup in double overtime. He was supposed to make his comeback this past Saturday, but Clemson’s game against Florida State was scrapped last-minute after another player tested positive. They had already made the trip to Florida. How frustrating is that?

The College Football Playoff (CFP) committee has a headache on its hands, with a messy schedule complicating the selection process. Only four teams get selected at the end of the regular season for a chance to win the National Championship. How can you properly select teams when everyone has played a different amount of games? The scheduling mess has led analysts and fans alike to campaign for a playoff expansion, with eight teams competing instead of the normal four. PAC-12 commissioner Larry Scott formally proposed the idea to the committee back in September, but it wasn’t approved. “They decided that doing that now would be such a significant change, and come with so many challenges, especially given the timing with the season already underway, that they concluded that the best outcome would be to make no changes in the format,” said Scott.

It makes sense that the committee would rather play it safe and not risk more outbreaks. The more games you add to the schedule, the likelier it is that the virus spreads. But you have to feel for undefeated teams like BYU (9-0) and Cincinnati (8-0), who most likely won’t make the playoffs even if they win the rest of their games. This is because of their strength of schedule, as they don’t play in the Power 5 (SEC, Big Ten, Big 12, PAC-12, ACC). The best teams in the Power 5 always have the advantage to make it because they have the most talent and play the best teams. A playoff expansion would make it much easier for the best non-Power 5 teams to qualify and compete on the biggest stage.

At this point, the schools most likely to make it are Clemson, Alabama, Ohio State, and Notre Dame. Each team is projected to win the rest of their regular-season games, with Alabama and Ohio State also being projected to win their conference championships and remain undefeated. The ACC championship will probably be Clemson against Notre Dame, and both teams should make the playoffs if Clemson wins. If the Tigers do lose to the Fighting Irish again, then they would surely lose their playoff spot, as it would be impossible for the committee to justify picking a two-loss team. With Lawrence back, though, it’s much harder to envision Clemson dropping that game. Who knows, though? This is 2020, after all. Nothing is off the table.

The NCAA Should Employ an 8-Team Playoff Next Season

Hopefully, Stanford head coach David Shaw was right when he said in September “Whether it’s six or eight, at some point in time it’s going to happen. We all know it; we all believe it. We’re just going to do it very, very slowly and methodically, but it’s the only thing that makes sense.” Hopefully, the coronavirus is not a major problem by next season. If it isn’t, then there’s no reason to delay the playoff expansion. With the current setup, it’s nearly impossible for Group of 5 teams (like Cincinnati) and independent teams (like BYU) to qualify. Even with the PAC-12 being a Power 5 conference, it’s only had two teams participate since the CFP began in 2014. There clearly needs to be more inclusion.

More than likely, the elite teams like Alabama and Clemson would still come out on top. However, it would give more exposure to the underdog schools, which would help them recruit better talent. A smaller school like Coastal Carolina winning a playoff game would mean a lot more to that program than a big school like Ohio State winning, for example. With the current setup, the top recruits will keep going to the top schools, and the same programs will be the best every year.

The Season Mirrors How Society is Operating

Unpredictability is par for the course nowadays. This year has been full of states going on lockdowns, then opening back up, then locking down again. Small businesses have closed down or are on life support, and schools are operating online across the country. All sports were cancelled for months and public life as we knew it seemed to come to a complete halt. Of course, there was a controversial presidential election just for good measure. In such an unprecedented year, it’s no surprise that college football has followed suit with the confusion and headaches.

But let’s look on the bright side. There easily could have been no season at all, especially with the NCAA not using a “bubble” like the NBA and other professional leagues. The Big Ten didn’t even announce that it would play this season until August, just a few weeks before the first games occurred. With the world in a state of crisis, college football fans are lucky that they even get to watch their school or alma mater take the field this season at all. At this point, it’s a miracle when each game is played.