A Love Letter to Wordle: How It Became Social Media’s Favorite Game 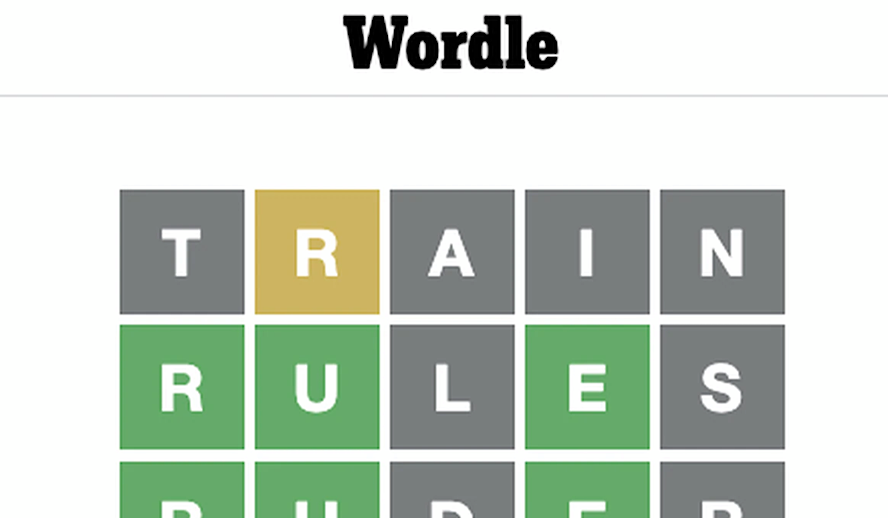 Word games are fun. There’s no other way to put it. The challenge is exciting and it puts our abilities to the test. Even if it’s trying to figure out the right term that fits in a crossword or thinking about an existing word to put down in a game of Scrabble, word focused games are exciting and addictive puzzles that bring a sense of joy, and oftentimes frustration, for a variety of people. With its recent rise, Wordle has managed to captivate all aspects of the amusement and competitiveness in these word-solving games. The green and yellow squares have continued to fill our social media feeds as this daily brain teaser became a staple in our everyday lives.

The Logistics of Wordle

If you haven’t played the game (which you should), it’s simple. You get six attempts to guess the right 5 letter word, the goal is to guess the word in as few tries as possible. The green letter means you have the correct letter at the correct spot. The yellow letter means you have the correct letter but the incorrect placement. The gray letter means the letter is not in the word at all. Yet the catch is, we get no starting word or letter to help us out. The game can be based on luck or pure strategy. Some players, like myself, have a favorite starting word to use. Others are sometimes spontaneous and will utilize any random 5 letter word to start out. What makes this game so enjoyable is the fact it is so simple. In comparison to other apps, There are no ads and no pressure coming from the site itself. The game doesn’t force you to play but rather leaves the player wanting more. What differentiates this game from the others is the fact you can only play it once a day. Each day there is a particular word you have to guess and it is the same word for everyone.

Wordle Was a Gesture of Love

Wordle’s name was a play on words by the creator’s last name, Josh Wardle. Wardle is a software engineer from New York who works for Reddit and has created other sites such as Place and The Button. Both Wardle and his wife, Palak Shah, became avid word puzzle fans in the midst of the pandemic as they would enjoy the daily crossword and various other word games. As they developed an interest in the challenge and anticipation of these puzzles, Wardle decided to make a new game in devotion to his wife and her admiration for them. In an interview with The New York Times, Wardle stated that he wanted “to come up with a game that she would enjoy.” The creation of Wordle was a form of showing love that has transcended into the enjoyment of others across the world.

It was first shared amongst his family and his wife but after seeing the excitement that surrounded the game with his relatives, he decided to make it public. Wardle released it in October 2021 and 2 months later, Wordle was played by thousands of people. It grew into immense popularity that had Twitter talking about it for months and has developed devoted fans such as those who are dedicated players to The New York Times crossword, similar to Wardle and Shah themselves. Its format of guessing became popular as others have created versions similar to the game. We see different renditions such as the site called Heardle which lets players guess the name of a song by giving them snippets to listen to. Another site is called Mathle, a game for those who are good with numbers as the premise focuses on guessing a particular equation. The game was an overall sensation. Soon after its success, Wordle was bought by The New York Times in late January 2022.

How Wordle Created A Community

Before I knew what Wordle even was, I saw grids of yellow, gray, and green all over Twitter. The  “Wordle 150 3/6”  was intriguing but it was difficult to fully grasp what these boxes even meant until I began to actually play the game. That’s what Wordle does so well in creating, a sense of curiosity that leads people to the site. The most unique feature of the puzzle is the fact players can share their results with others online or through text message. The grid of green and yellow boxes makes the results look cryptic and spoiler-free but it is easy to decipher amongst those who also play. It creates a shared understanding within a group of people which entices a sense of community.  Having us figure out the same word every day forms a particular bond that makes us relate to the collective struggle and challenge we all may have gone through when solving the word.

Looking at everyone’s results can bring a competitive nature as we wonder how well we did (or bad) in comparison to others. It has formed opportunities that allowed players to come together and enjoy the game with one another. You may say we can get the same feeling of common understanding through various puzzles like Wordscape or Boggle, but what makes Wordle so irresistible is the fact we are able to share the collective experience online. To be able to look through your feed or message your friends these sets of boxes every day brings entertainment that makes this game so fun to engage in.

Wordle was released and made during a time in which new variants within the pandemic were on a rise. Wardle states in an interview with Slate “the game feels really human and enjoyable. And that really resonates with where we’re at right now in the world and with COVID.”  It consistently has given others a sense of familiarity during times when the unfamiliar was always recurring. With current global affairs happening, Wordle’s simplicity has given us something to look forward to every day during these weird and challenging times.