Dylan Sprouse’s ‘Tyger Tyger’ Is A Stunning Ode To Art 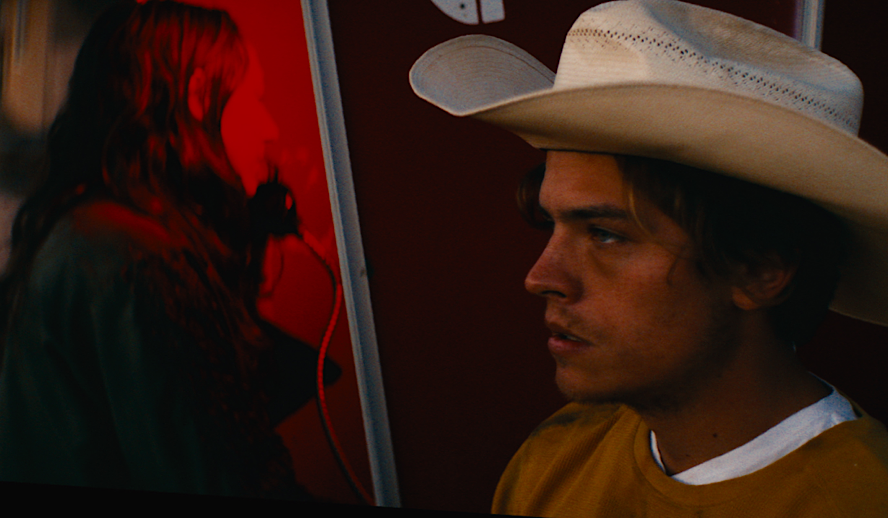 “He can’t come in here without a mask,” a scraggly old man, who the audience can only identify as Uncle Joe, points at the man standing in his kitchen. I laugh to myself- if only they knew how true that was.

‘Tyger Tyger’ is an eerie premonition, shot in 2019, of the COVID-infected world of today: a mysterious, never-identified disease lurks around every corner and nearly everyone is susceptible to it, although it was never made quite clear how or why. The main character, a determined young woman going by the name of Blake and sick with an unknown disease, is on a self-purported journey to deliver the necessary medication to those who cannot get it. With the aid of a greedy boyfriend, a silent, whip-smart girl, and a strung-out junkie, she robs a local pharmacy and journeys to the Free City. Along the way, they accidentally become the subjects of a manhunt conducted by those they have scorned in getting the medication and must take shelter in a commune-style camp, where money has no value and life is rough around the edges.

Related article: Oscar Buzz | Andra Day Is Astounding in the Not So Astounding ‘The United States vs. Billie Holiday’

A Confounding Series of Events

This film, by all accounts, is a flurry of emotion that the audience is not given time to process. You live out the events of the film almost in real-time, walking next to the characters as they doggedly continue to put themselves in confusing, dangerous situations that aren’t always the most traditional. It’s odd that from this film, highlighting the ongoing opioid crisis and class differences between those who can afford medical aid and those who cannot, the writing also details a love story, a tale of friendship and survival, and a western-adjacent futuristic world. Or, at least, futuristic for the time that this film was being made; We now live in the world they try to caution against.

However, this drug-addled, paranoid shooting style was certainly done with a purposeful flair, one that I’m sure will not cater to everyone’s preferred style of film. ‘Tyger Tyger’ has a linear plot with large gaps of explanation dropping out with little to no reason- I spent half of the film wondering if the main character had a fatal sexually transmitted disease and the other half trying to figure out if the mysterious illness was simply addiction and its murderous side effects. There are few movies where this nonsensical storytelling would work, but I believe that director Kerry Mondragon really understood how to inject life into the scattered thoughts of his character’s words.

An Indie Cast of Characters

Sam Quartin, Dylan Sprouse, and Nekhebet Kum Juch lead this film as the sick Blake and her merry band of criminals- Sam knows that her purpose in life is to help others that cannot help themselves, Sprouse plays Luke, an abducted heroin user who attempts to get clean, and Kum Juch is Bobby, the mute and clever girl who aids Blake in her mission to deliver the medication. Arguably, this film is not focused on the acting itself- the actors fit naturally into their environments, almost as if ‘Tyger Tyger’ was a documentary and not an arthouse film. Sprouse has made a strong return to acting in recent years, and it is a delight to see him grow into complicated, layered roles. Quartin was engaging. The audience is truly able to feel how paper-thin and fragile her world is, constantly threatening to crumble under the weight she has taken on, and yet she carried herself with an admirable amount of strength and dignity. Nekhebet Kum Juch deserves much applause for her eclectic performance as Bobby, especially when she was unable to communicate her emotions with words- she was plainly observant, smart, and adaptive.

Thea Sofie Loch Næss gave an extraordinary performance as the sweet, feigning innocent Emerald, a dress-making resident of the commune who takes Blake, Luke, and Bobby in to show them the ropes. Her lilting, otherworldly tone and soft demeanor will instantly capture the audience’s heart and create an almost-familiar feeling among a wasteland that many people will never come to know.

The art direction of this film is probably the most notable element within the entire production; The opening sequence- a chaotic scramble to prepare for a burglary, a pair of waste-away drug addicts argue with a pharmacist- is studded with acrylic paint scrawled across the screen. It was admirable, the lengths this film went to provide a lurid, cotton-candy-colored dream borne from the empty Californian desert. With cinematography by the up-and-coming Ziryab Ben Brahem, who has begun establishing an impressive name for himself, this film will certainly be an early highlight in the easily foreseen successes he will amass. Since this film is chasing a narrative full of purposeful holes and nonsensical dreaming, the cinematography and art direction really tied a neat bow around the assumed director’s vision.

A Futuristic Glimpse Into Our Current World

While this film was certainly meant to be a dream-like state of anxiety and fictional concern, watching it in the current day and age felt more like the beginning of our end. It could be possible that we’ll all be fighting to purchase expensive medication within our uncertain future, that society has fallen to the wayside and we rely on the resilience of the human spirit to get by. However, this film can also serve as a simple reminder of the murderous effects addiction can have, the lives that drugs can take without warning or reason. Within the commune society, those with the ominous illness were not considered too far gone- the drug addicts were.

This film was beautiful without being glamorous, truthful while still concealing reality, and complete with an ending worth waiting for. ‘Tyger Tyger’ is both Kerry Mondragon’s writing and directorial debut for a feature-length film, and I am quite excited to see what stories he will choose to tell in the future, especially if he chooses to continue down a path of unbridled art and humanity.

‘Tyger Tyger’, starring Sam Quartin and Dylan Sprouse, is now available to digitally stream from home wherever you prefer to rent and buy movies.