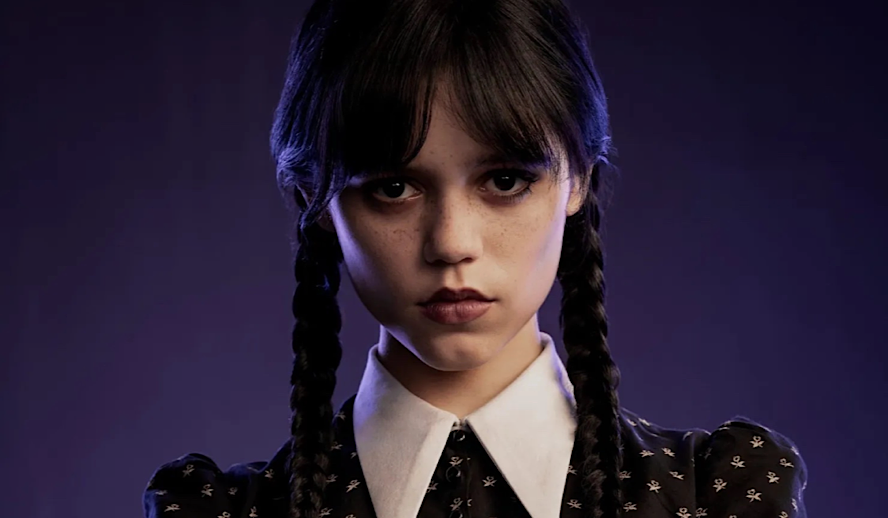 Over the past couple of years, Hollywood has bought into the trend of taking lovable characters from older pieces of fiction and reviving them into a modern, more dramatic light. The CW’s ‘Riverdale’ was a darker adaptation of the Archie Comics. The Italian-made children’s cartoon ‘Winx Club’ was recently taken under Netflix’s wing with a live-action spin on the characters. Even Winnie the Pooh is set to have his own horror movie (yes, the lovable bear of everyone’s childhood is going down the path of horror). It seems that Netflix has landed on their next modern reboot, taking the iconic character of Wednesday Addams from ‘The Addams Family,’ and giving her a fresh story.

This past week, Netflix released a teaser trailer, giving a first look at actress Jenna Ortega as the morbid, gothic titular character. The series is simply called ‘Wednesday,’ and spawns from the frighteningly innovative mind of Tim Burton – who has given the world spectacles such as 1989’s ‘Batman,’ ‘Edward Scissorhands,’ ‘The Nightmare Before Christmas,’ and so much more. The only hint at a release date is that it is “coming soon,” so hopefully the series will land in time for Halloween, or before the year is up.

What Does This First Look Promise?

In this simple teaser trailer, Wednesday walks onto the scene, showing the modern look of the character, and does the signature Addams’ snap, accompanied by the infamous hand. It’s short and sweet, and straight to the point – not even a minute long. This is a series drawing inspiration from the classic depictions of ‘The Addams Family’ (the 1964 series, the 90s films, etc.). However, it will focus more intently on Wednesday Addams and her journey through adolescence. It’s no secret that Wednesday is one of, if not, the most popular character from the series, making it strategic for her to be the one in the spotlight for any modern retelling. This show is even named after her.

The words written out during the trailer read, “Netflix woefully presents…a twisted new series from the mind of Tim Burton.” Those words basically tell the viewer exactly what they need to know going into this. The series is hoping to capture Wednesday’s woeful disposition in Burton’s take on the character. The trailer is promising a character-centric story, filled with some sweetly sinister story beats – at least, that’s the hope. Now all the series must do is deliver just that, which shouldn’t be so hard, right? Only time will tell. Because the first look is so short, there’s a lot of room for speculation and a range of expectations. Some viewers might get excited and think this is just the thing people want to watch right now. Others may look and see it as just another adaptation swimming in the sea of over-dramatized messes already produced. Now it’s just time to play the waiting game to see which expectations will be fulfilled.

Wednesday Addams – A Fresh Face for the Iconic Character

Actress Jenna Ortega has a lot to carry on her shoulders by taking up this mantle. Currently, Ortega is absolutely crushing the film industry! Cementing herself as the scream queen of the 2020s, she has starred in the newest ‘Scream’ movie, earning herself an MTV Movie & TV Award for her performance, and in other horror films such as ‘The Babysitter: Killer Queen,’ and ‘X.’ Additionally, she proved her dramatic chops with HBO’s ‘The Fallout,’ in which she played a troubled teen who experienced a school shooting. All of these roles are testaments to the 19-year-old actress’ range and ability, proving her as a worthy successor to the Wednesday Addams mantle. Unfortunately, Ortega has a lot of hurdles to leap due to the pressure of taking up such a well-known character.

People are always comfortable in their familiarity, making the change feel like the enemy. It’s easy to get comfortable with what is habitual and what is standard, or reliable. When it comes to nostalgic fiction, everyone shouts for things to be as close to the original as possible, for fear that if something is too separate, it won’t pay the proper respect to the original. If Ortega’s performance doesn’t pay enough homage to Christina Ricci’s former performance (Side note: Ricci is also set to act in the series in an undisclosed role), many will shake their heads in disapproval. The media is already criticizing the new look for the character because Ortega’s version has bangs. It’s trivial to throw a fit over a hairstyle, but people like their familiarity. They want Wednesday’s visible widow’s peak. However, the bangs are a great demonstration of what should be assumed of Ortega’s take on the character. It’s still Wednesday Addams, with the glum facial expressions, the sharp outfit, and the two braids. Yet she is evolved to fit the more modern era this series is being released in. There will likely be new elements shining through the character, which build on the original blueprint. And that’s what all new adaptations should seek to do.

The Struggle with New Adaptations

This pattern of old material being fashioned into different takes for a new generation is a popular train to hop on. The difficulty is…rarely do any of these new adaptations sit well with audiences. The most obvious culprit is the blind idea that everything needs to be dramatized for the current world. There’s the obsession with “darkifying” classic pieces of storytelling, as mentioned previously with all the new adaptations. Guess it’s a good thing Wednesday already has a darker outlook on the world. However, the truth is, a revival doesn’t need to be more dramatic for a more modern audience, it just needs to show some nuance. Maturity and nuance are not synonymous. There doesn’t need to be this grappling with the mature subject matter in these works that were initially intended for children or families. There can be deeper subject material, but it’s not necessary to make the remake, or reboot, work.

Just like the need for a fresh, yet respectful spin on the original, titular character, the series as a whole needs to approach itself as a fresh, yet respectful spin on the original source material. It’s a tricky tightrope to balance, but it’s very possible. People will always be comfortable in their familiarity, but that doesn’t mean minds can’t be opened up to something a little more new and a little more modern. Everyone just needs to snap their fingers twice and hope that ‘Wednesday’ delivers where it needs to deliver.