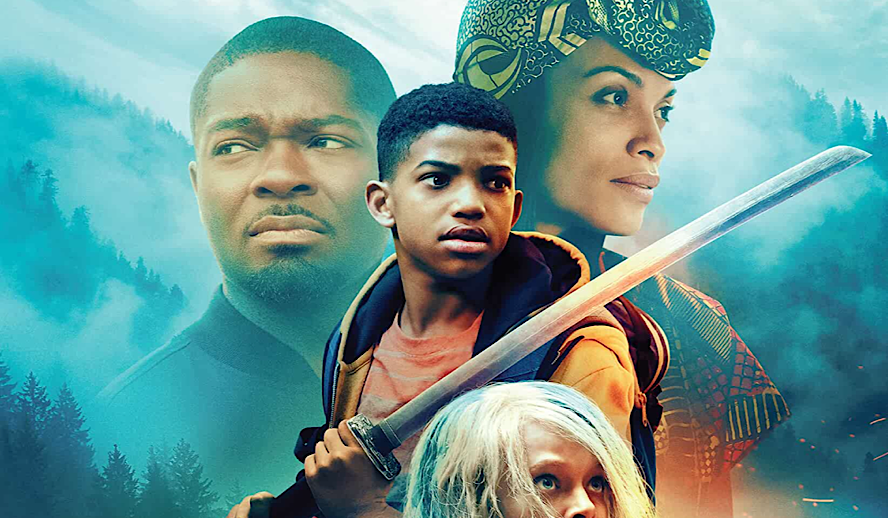 A Family Drama with a Fantastical Edge

‘The Water Man’ follows a young boy named Gunner (Lonnie Chavis) as he seeks out the fabled immortal Water Man, hoping to glean some knowledge from his powers in order to help his dying mother, Mary (Rosario Dawson). During this family affair, wrought with stress and uncertainty, Gunner’s father Amos (David Oyelowo) moves back into the house, with tensions arising between him and his son.

Amos’ inability to understand Gunner, especially with the boy’s interest in books and art, causes a rift to form between them. Ultimately, ‘The Water Man’ is a heartwarming family drama about what life is really about. In the end, the film stands by the notion that it’s about loving each other, no matter how short of time you have.

The film is about friendship as well – and the importance of a found family. A newcomer in town, Gunner is still getting used to the lay of the land. He doesn’t seem to have many friends, save for the woman who owns the local bookshop. When he decides to go out and seek the Water Man, he realizes he needs some help. So, he teams up with a miscreant named Jo (Amiah Miller), who has supposedly seen the Water Man, for the journey. Most of the film follows the two as they search the woods for their target, cultivating a friendship along the way. Though they are both initially there for their own personal motives (Gunner to save his mom, Amiah for the cash incentive), they connect in emotional ways and become close friends.

Overall, ‘The Water Man’ is an adventurous, fun film that would surely delight a child audience. However, it’s not necessarily a film that all ages would enjoy – at its heart, it feels very directed towards that younger audience. That is not to say that the film is unwatchable, though. In fact, it mostly succeeds in what it sets out to do, only falling short in a couple of ways. If you’re there for the fun and thrills, you might not even notice.

Like many other coming of age films, ‘The Water Man’ takes place in a small, rural town blanketed by the tall tale of a mythic figure who has haunted it for decades. Think Pennywise in the IT franchise (although, considerably less terrifying). In this film, that figure is the Water Man, a man who, decades before, found a special gemstone gifting him immortality. This caused him to survive a massive flood that killed many of the people in town, including his wife; to this day, he supposedly searches the woods and surrounding areas for her body in order to revive her. Because of his survival in the flood and his search in the rivers and streams for his wife, he was adequately “dubbed the Water Man.”

Overall, this myth is extremely intriguing. The mystery of the Water Man and his story, which is told through artistic animated vignettes, gives the film a great layer of suspense and eeriness. It adds a lot of character to the film, which mostly takes place in the vast woods where the Water Man inhabits. Lastly, it imbues the film with a sense of visceral fear and spookiness that has been, honestly, lacking from children’s films nowadays. Much of Gunner and Jo’s search for him in the woods takes place at night, lit solely by Gunny’s headband flashlight, which means most of the frames are engulfed in darkness. In all honesty, the eeriness of this all would make it a pretty scary film for kids.

However, the film fails to dive deeper into the Water Man myth past its initial premise and mystery, ultimately causing the film to fall flat – especially for older audiences, who perhaps are expecting something more. Often, throughout Gunner and Jo’s search for him, which takes up the majority of the film, it’s even easy to forget why they’re there at all. This can be attributed to a lack of presence of the Water Man throughout. Even though he obviously cannot be found till the end, there is a strong desire to see more of him, whether that be through the representation of the woods, or even in conversation (past “where could he be?”).

Fun Facts and Background on the Film

That being said, ‘The Water Man’ would still be enjoyable for a young audience, who will probably be too captivated by the thrill and chase of the myth to be too bothered by these deeper details. And for adults, there are certainly other perks of the film that are exciting! For one, the ‘Water Man’ is the directorial debut of David Oyelowo, who also stars in the film as Amos Boone. Of course, Oyelowo is the British acting powerhouse that has been in dozens of films like ‘Selma,’ ‘Chaos Walking,’ ‘Planet of Apes,’ ‘Don’t Let Go,’ and ‘The Midnight Sky.’ As a classically trained actor, he’s received praise and accolades across the many years of his star-studded career. Supposedly, Oyelowo was initially signed onto ‘The Water Man’ as just an actor and producer, but hopped into the director role when the previous one dropped out of the project.

In an interview with Looper, where he likened ‘The Water Man’ to family classics like ‘E.T: The Extra-Terrestrial,’ Oyelowo said, “now that I’m a father myself, I’ve found myself wondering why those films aren’t being made as much, because they are classics for a reason. They sort of grow with you.” This connection to the material and desire to create similar impactful film experiences, drove him to direct the film. It’s always exciting to see actors pivot into another creator role, especially someone so highbrow and well regarded – and Oyelowo certainly does the job admirably.

The rest of the cast is star-studded as well, with Rosario Dawson as Mary Boone and Amiah Miller as Jo (Amiah played the little girl in the last ‘Planet of the Apes’ film). ‘The Water Man’ is also executive produced by Oprah Winfrey herself under her company, Harpo Films. So, even if you’re not all that into the family film genre, there are definitely other fun incentives to check the movie out!

‘The Water Man’ is now playing in theaters worldwide.