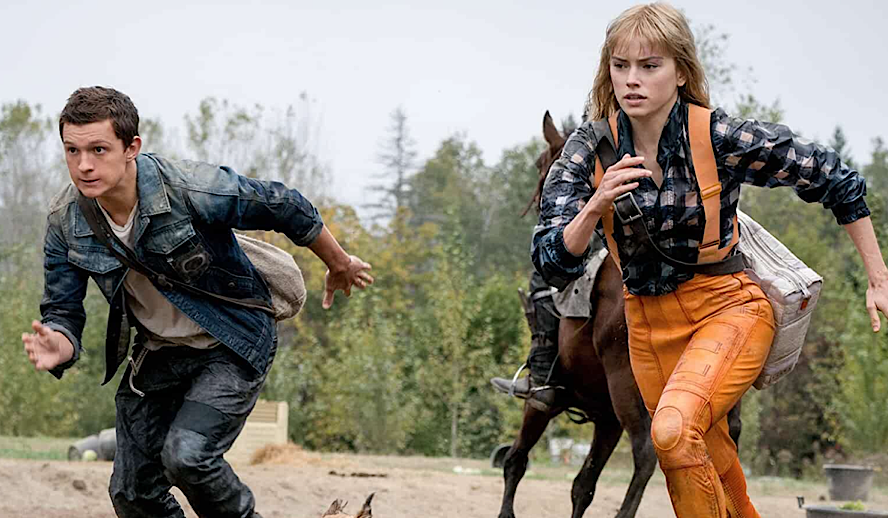 ‘Chaos Walking’ follows a traditional Hollywood structure and in theory, should be a really good movie. The dense setups show how ambitious the film is to expand into something much more than just one film, but the vague payoffs and lack of character development limit audience’s interest in even wanting more. Based upon the best-selling novel ‘The Knife of Never Letting Go’ by Patrick Ness, a co-writer of the screenplay along with Christopher Ford, this movie tries to take the long books to the screen with a Cinematic evolvement.

There are many great qualities of this film, such as the ravishing visual effects, picturesque set design, and captivating and transfixing cinematography. As expected, the directing and performances are impeccable, it’s the excessively fast-paced rhythm of the story, forced messages, and several unfulfilled details throughout that leave the film ultimately disorganized.

Tom Holland plays the unexpected hero, Todd Hewitt, a young man who’s a near laughing stock in his community of only guys,  but tries to gain status any way he can. Daisy Ridley’s character, Viola, is a strong young, mysterious woman who crashed her ship near Todds community.  After a bunch of random, drastic leaps in character transitions and tonal shifts that go by much too quickly, it results in Todd helping Viola travel to a safe place that might be able to get her home. Every step of the way, the film has a lot of dense setups, but with no unfulfilling delivery, which is such a bummer once the characters start becoming dimensional because the originality packaged in a familiar structure makes the viewer want to like the film.

Midway through, themes and messages start being forced, and some scenes feature archetypical homages that are out of touch and miss the mark, the movie keels over to being truly disheveled. With that being said, the performances are extraordinary, and the cinematography and sound mixing was excellent. The writing, editing, and pacing are what seems most off-beat, and it seems that the creative and novel elements of the story were stripped to fit a classic Hollywood structure, and edited down to be a 50’s Hollywood formula, but that method simply doesn’t synchronize with this type of story because of its inherent uniqueness.

The novel, and inherently compelling concept and how the principal characters inhabit this world are the greatest strengths of this film, but the filmmakers seemingly didn’t know where to take it. There’s so much good in this film’s intentions, it just never seemed to be able to nail the landing. The filmmakers tried to organically implement strong messages of dealing with loss, adversity, and low expectations, along with more touchy ones like female empowerment, dangerous prejudices, and toxic masculinity to the extremest extents, but it seems so disconnected from the rest of the story that it’s almost jarring when and how it’s executed. The characters arcs are not firm either, because the essential underlying goals and motivations that make characters memorable and engrossing are not there, and the viewer ends up empty handed while they try to get a firm grasp on what’s going on between these characters and what’s going on in the movie.

Relate article: A Tribute to Mads Mikkelsen: How the Delectable Dane Conquered Hollywood

The entire cast did a wonderful job, and that goes to their high status and experience, along with Doug Liman’s impeccable directing skills that he’s demonstrated for decades now. Something that can’t be overlooked is a noticeably problematic trait of Tom Holland’s character, Todd, that was at times uncomfortable to watch rather than charming, was Todd’s romantic and intimate pushiness towards Daisy Ridley’s character Viola, which came off as almost pushy and obsessive. Even though Todd grew up in a colony of only men, the assumed sexuality elements are forceful, and his off-putting intimate aggression, especially with Viola persistently relenting and outspoken disgust with his behavior is not justifiable.

The transition of a key character into a villain was unclear, unnatural, and simply crept up without any answers, with their character development ultimately being immature. Mads Mikkelsen, who plays Mayor Prentiss, not surprisingly plays a convincing villain but his goal and motivation get muddled throughout the plot, and there’s never a smooth transition into his villainous true nature. Frankly, his character is not dimensional, and it’s difficult to connect to him, even though Mikkelsen is always captivating. The dynamics between him and Todd’s family were not clear-cut or specific early enough to provoke an emotional response from the viewer.

Nick Jonas’s character did not fulfill his purpose, and even though Jonas did a solid job playing a convincing power-hungry beta character, his goals and motivations or specific traits were conveyed in a clear enough manner to maintain engagement, nor did he have much character development. He had pure evil in him that was only driven by him wanting to impress his father, Mayor Prentiss, and gain power, but didn’t have any authentic or dimensional traits to make his villainous character relatable or comprehendible. This seemed to be an editing mistake, because Jonas, in every scene, does a phenomenal job at conveying the emotions and desires of a young, power-hungry, bully.

Overall, the beats and rhythm were not hitting in a consonant, smooth way, rather, very convoluted and unnatural. Tom Holland, who is famous for playing Spider-Man in the Marvel Cinematic Universe, has been on the frontlines of blockbuster films in recent years, especially in the past year. Daisy Ridley is famous for portraying Rey in the Star Wars trilogy. It’s interesting the two biggest stars in the world would come together for this film, and see so much promise in it, when this was such a top-heavy film in every aspect. With Doug Liman, who’s had an up and down history commercially and critically as a director, it wasn’t expected this film was going to be a near-masterpiece. However, they, unfortunately, missed the mark with this one. The entire cast and crew are certain to redeem themselves with other projects, as they are all exceedingly talented.