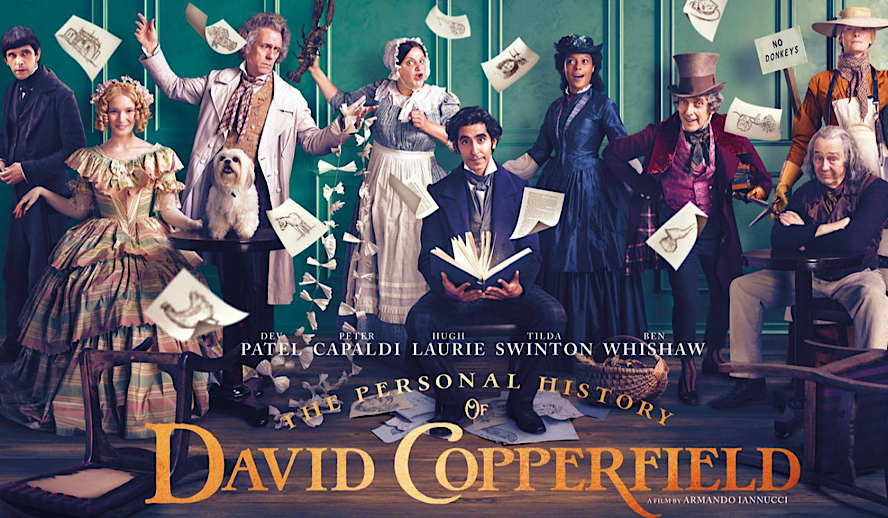 In an age where film can exist purely for aestheticism, or for the pleasure of the mass audience, it is rare to find a story that is witty, cunning, and overall a delight to behold. ‘The Personal History of David Copperfield’, written and directed by the acclaimed Armando Iannucci, manages to make a lighthearted, fast-paced tale out of Charles Dickens’ comparatively heavy Victorian Era novel, ‘David Copperfield’.

The film, told in whimsical vignettes, follows the story of the titular character David Copperfield, played by the imitable Dev Patel, as he lives through his most unusual coming-of-age. Starting his life as a curious little boy, Copperfield is soon sent away when his mother marries a horrible, haughty man and works in a bottling factory until the news of his mother’s death drives him to seek new circumstances. Finding shelter with his eccentric aunt and her equally as irregular cousin, Copperfield takes it upon himself to become a gentleman out of squalor. All the while, David Copperfield meets a larger than life cast of characters, falls in love, and writes down all of the eclectic sayings he hears along the way.

The Challenge of an Ensemble Film

The most joyous task this film takes on is the sheer number of characters that are written with a delightfully complex hand. Almost twenty different characters take center stage at some point in this film, effectively making it an ensemble piece, but Iannucci’s writing really is something to be admired. While the film has a playful, childlike quality that is often drained from classical stories, I would think it difficult to find a person of any age that didn’t find this movie entertaining. Iannucci keeps his script moving at just the right pace, allowing the viewers to dwell in Copperfield’s misery (but not for too long) and rejoice in his successes (all while keeping you on your toes).

The characters themselves are given small, secondhand qualities that really round out the world they fill without seeming too forced. David Copperfield, for example, is our hero, protagonist, and all-around easily enjoyable character. However, it is moments like Dev Patel’s awkward, galloping gait, or Copperfield’s mimicking impressions of people from his childhood, that add a deeper level of believability to a world that is seemingly out of our modern grasp.

The Cast of Many, Many Characters

When speaking of the characters, one cannot go any further without acknowledging the dutiful work of the cast. This film, although the script and direction are undoubtedly impressive, would not hold the same loveable charm without the efforts of the ensemble cast. Their performance as a unit had the perfect ebb and flow that a movie like this needs in order to keep the world turning. A vignette script can be downright tricky for fear of losing your audience’s interest, but a cast that plays perfectly off one another’s energy keeps the attention rapt.

Led by the leading man himself, Dev Patel played David Copperfield with a bumbling grace and charm that should not go unnoticed by the award committees. Jairaj Varsani played the younger version of David when he was known as simply Davey (or the infamous Biting Boy), and the pair worked in perfect tandem. Both Patel and Varsani clearly took notes and details from the other boy’s performance as Copperfield, and the seamless transition between childhood and adult life was an excellent payoff.

Joining Copperfield is Tilda Swinton and Hugh Laurie as the offbeat and wealthy Betsey Trotwood and Mr. Dick who both give, frankly, astonishingly impressive performances as characters who fit perfectly into Iannucci’s puzzle. Other standouts are Daisy Mae Cooper as Copperfield’s stout nurse, Peggotty, Peter Capaldi and Bronagh Gallagher as the achingly funny Mr. and Mrs. Micawber, and Rosalind Eleazar as the clever Agnes Wickfield. All in all, this cast is worthy of a series of standing ovations, and I only wish I were able to give it to them.

Why Colorblind Casting Should be the Standard

It is unfair to the talents of the cast to say that the colorblind casting made ‘The Personal History of David Copperfield’ so praise-worthy, but it is certainly something worth noting. Most period films are completely all-white casts, some without even an actor of color as a background character, and this is explained away with washed-out excuses like being appropriate for the time. Insisting that people of color did not exist in every corner of the globe in the 18 and 1900s is both wrong and lazy storytelling, and shows the limits that screenwriters adhere themselves to. Why can’t a period piece be set in a different country worth telling? Why must they all be euro-centric?

Building a visual world from old text can be exceedingly difficult, but what I believe made Iannucci’s film so believable is the casting, robust with diversity. Not once did I stop to think about the race of any individual character, successful or otherwise, because the story wasn’t meant to highlight their differences. The story, in fact, did not mention ethnicity at all, but the world still felt full of life and experience. It would do other Hollywood producers well to consider this style of casting- if not for the sake of representation, then for the superior storytelling.

‘The Personal History of David Copperfield’ is a Delight

Dev Patel has captured our attention ever since his work in ‘Slumdog Millionaire’, and I am more than glad to see him shine in a comedic role, which offers a brilliant contrast to his usual characters. ‘The Personal History of David Copperfield’ is just a genuinely splendid movie to watch- admirably, unlike other period pieces, it does not try to be anything life-changing or earth-shattering. This film understands its place in the world of film, and for that, it becomes somehow even more impressive. A large cheer for one of the most enjoyable films of the closing year, and may we hope to see much greater things to come.