‘The First Lady’ Episode 1: Behind Every Great Man is a Great Woman 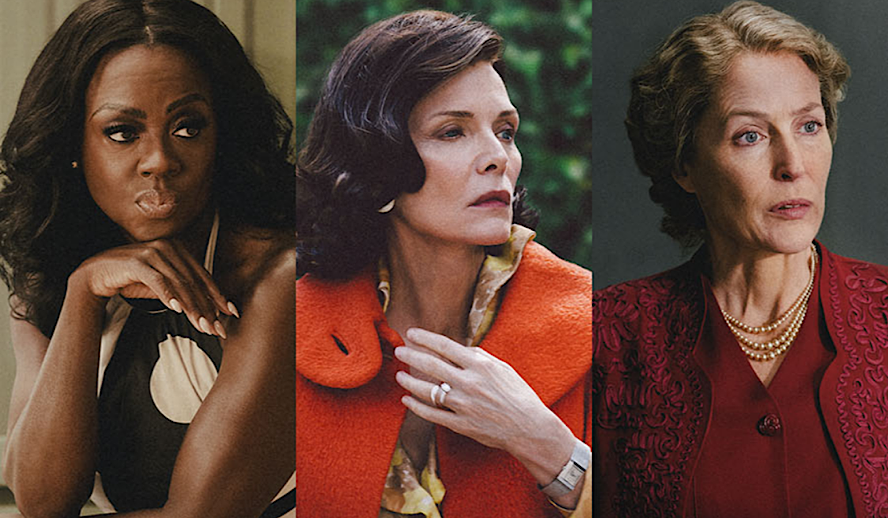 ‘The Crown’ has been one of the most successful and critically acclaimed series in recent years. The series follows Queen Elizabeth II, spanning decades of her life and bringing many familiar faces along the way, from Margaret Thatcher to Princess Diana. Hundreds of award nominations and a hefty collection of Emmys later, it’s no surprise that ‘The Crown’ would become a blueprint for television success. Enter, ‘The First Lady’, an Americanized version of ‘The Crown’ in many ways, all the way down to Gillian Anderson’s roles in both series.

‘The First Lady’ also spans decades, but it’s more fitting to call it centuries in this case. The series follows three different First Ladies, Michelle Obama, Eleanor Roosevelt, and Betty Ford. The vastly different timelines give us a look into just how much has changed (and just how much hasn’t) behind closed doors of the most famous house in America.

‘The First Lady’ is constantly jumping from year to year, relying on both a timeline graphic and incredible costume and set design to keep the viewer updated. Episode One, ‘the white house’, spans from 1982, when a young Eleanor Roosevelt suffered the loss of her mother, to 2008, when Michelle Obama first stepped foot in the White House, and took frequent stops everywhere in between. The circumstances in which these women and their husbands found their way into public office vary greatly from each other, but they all shine in their own ways.

We see Michelle as a modern woman, caring more about her own career than her husband’s campaign. She’s busy, rushing from one meeting to the next and taking on challenges to better the future of Chicago. Eleanor, nearly a century prior, did not have this luxury. She was tasked with caring for her husband as he fought polio, working around the clock to make sure his campaign didn’t fail. He was running for governor at the time, but Eleanor knew that with the right amount of blood, sweat, and tears, presidency was right around the corner. Betty Ford, likely the lesser-known of the three, wrestled with being pushed into the spotlight. Her husband, the newly appointed Vice President, did not run or campaign, so Betty was nowhere near as experienced with public office as the other women.

One of the biggest themes in the episode is the role of race in the American government. The parallels between Betty Ford and Michelle Obama’s experiences are striking and should only gain effectiveness as the episodes progress. Betty was newly in office as the Second Lady when Dr. Martin Luther King Jr’s mother, Alberta Williams King was assassinated. Betty was quick to request a plane, rushing to attend the funeral. Betty faced backlash from the White House staff, who were more focused on the way her actions would reflect on the White House than the actual situation at hand. Years later, Michelle had to grapple with the fact that Barack needed Secret Service protection, despite the fact that he hadn’t even made it to primaries yet.

The parallels between the two stories go to show that racism is alive and well in America, even in a post-Civil Rights Movement, pseudo-progressive world. In Betty’s case, the White House staff didn’t want Betty attending Alberta Williams King’s funeral, too preoccupied with keeping up appearances and whether her attendance would be too political or controversial. Michelle dealt with this racism first-hand. Her husband needed security not because he was a politician, a senator at the time, but because he was Black. Barack wasn’t yet the president, or even on a ballot, but he was a Black man with outspoken political opinions in the public eye, and that was enough to put him, Michelle, and their children in danger.

‘The First Lady’ is not an easy show to produce. For one, the different timelines call for complex set design and costume, setting each era of the White House apart from the next. With all three women making their way to Washington D.C., it’s important that each setting can stand out, differentiating the timelines from one another. In ‘The First Lady’, this was incredibly successful. With one glance at the furniture, hairstyles, or outfits it was easy to tell which story we were following, even if two or more timelines are set in the same location. Everything looked intentional, all coming together to create three different but cohesive timelines.

Another struggle with creating this series is the fact that each First Lady is already incredibly well known. Many Americans or anyone well versed in United States history already know what the characters look like before beginning episode one. This makes sense as the characters in the show are presidents, first ladies, and public figures that many have learned about, if not experienced in real-time. This makes immersion into the show difficult, if Gillian Anderson didn’t look like Eleanor Roosevelt, we would know. Each actress, Anderson, Michelle Pfeiffer, and Viola Davis, seemingly underwent entire transformations, embodying their respective first ladies flawlessly. The actresses are each incredibly well known as well, adding a whole new layer to overcome when it comes to immersion. But it was no difficult feat for our leading ladies. It was easy to jump straight into the worlds of the first ladies, no matter how well known the figures are or how different each timeline is from one another.

‘The First Lady’ delivered quality content and immersive storytelling in just one episode. Even as time was split between the three women and we jumped straight into their action, it was easy to fall into step with the world of politics, drama, and womanhood. If the series could deliver so much in just an hour, the rest of the season must be filled with even more excellence with each new episode.