Netflix’s ‘The Chair’: A Remarkable Performance from Sandra Oh That Drives This Comedy Home 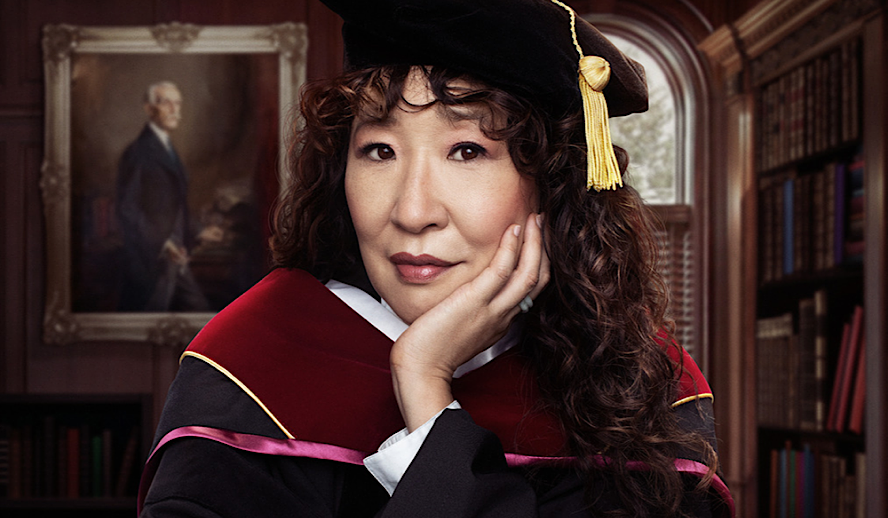 There are many things you could criticize Netflix for when it comes to their position as one of the largest creative platforms in a world full of streaming. Too many shows, not enough creative substance in their programs, decrease in quality, etc. But despite these criticisms, there are two things they do right: They know how to get big names and they’re open to any idea.

We’ve seen this before with the likes of Martin Scorsese, Shonda Rhimes, and Ryan Murphy, who have all worked with Netflix in some capacity to make original content for the platform. Recently, back in 2019, they attracted David Benioff and D.B. Weiss, the creators, and showrunners of the hit show ‘Game of Thrones’, who signed a lucrative $200 million dollar deal to create new content for the platform. Now, with all of this creative freedom and creative control over their next few projects, there’s a question everyone wants the answer to: What’s next? That’s where ‘The Chair’ comes in.

‘The Chair’ is a comedy-drama miniseries created by Amanda Peet and Annie Wyman and executive produced by Benioff and Weiss. Starring Sandra Oh in the lead role (she’s an executive producer on the series as well), the show follows Oh as Dr. Ji-Yoon Kim, a dedicated woman who gets promoted to the chair of the English department at Pembroke University. As the first woman of color to hold the position, she has to deal with the high expectations of the other professors in the department as well as the dean, Dr. Larson (David Morse), who wants her to improve enrollment at the university. Meanwhile, she also must deal with an unruly home life as a single mom with a rebellious young daughter. As the pressure of her work and home life increases, Ji-Yoon has to learn to find a balance between the two while being the best she can be.

Intersecting with all of this is her relationship with Dr. Bill Dobson (Jay Duplass), her friend and colleague who is dealing with personal issues and lives an erratic, self-destructive lifestyle. He’s always late to his own classes, gets drunk and high frequently, and puts in minimal effort when teaching his students. Despite all of this, he’s loved by his students and is a popular professor at the university. That is, until he gets caught up in an academic scandal that threatens to end his career at Pembroke. With mounting pressure, Ji-Yoon tries to deal with Bill and his issues all while still keeping her department afloat.

‘The Chair’ – A Look into One Woman’s Hectic Life

The real star of the show here is Sandra Oh, who does a great job in her performance as Dr. Kim. Her charisma and lovable charm as the leading woman stand out wonderfully in the first two episodes, and casting her as the in-over-her-head but also confident department chair was a great choice. Oh has proven herself to be a formidable and gifted actor in the worlds of both television and film, so it’s no surprise to see her bring so much weight to her performance. Both episodes showcase both the professional and personal aspects of Dr. Kim’s life as she deals with pressure on both fronts.

In the pilot episode “Brilliant Mistake”, she is given her promotion and gets to work right away making changes to the English department. And almost instantly, she is faced with a hard problem: To increase enrollment and create room for Pembroke to hire more professors of color, Ji-Yoon has to find a way to convince the three highest-paid faculty members to either retire or leave the university. Also dealing with other faculty problems, she tries to convince Bill to step up and prove his worth as an English professor.

The second episode, “Faculty Party” deals more with her life away from school. After dealing with an important dinner party for all of the university faculty members, she learns that her daughter has run away from home and is out on the streets at night by herself. So with the help of Bill and her elderly father, Habi, Ji-Yoon tries to look for her daughter and deal with the disconnect in their relationship. Bill aids her in her effort, but unbeknownst to him, an unflattering video from one of his classes is leaked throughout the student body of Pembroke and his career is in serious danger.

As the one person who connects with Ji-Yoon the most, Bill is an important part of the show and Jay Duplass’ performance is worth pointing out. Bill is a screw-up on every level, something his daughter and Ji-Yoon both remind him throughout “Brilliant Mistake”. But despite his faults, he still has a heart and he clearly cares about the people close to him, especially Ji-Yoon. She tells him to “get his shit together” and be a good professor, and because of her, he decides to make a better effort. When her daughter runs away from home, Bill is the first person to help her in her search. He connects well with people, he just can’t get past his own personal demons. Duplass is good at portraying his self-destructive side just as well as his unguarded sensitive side, and he makes an interesting foil for Sandra Oh that adds a fun dynamic to the show.

With all of this in mind, ‘The Chair’ might not be the perfect show for everyone. There are laughs, but the comedy is sacrificed for a deeper focus on character and character relationships. That’s not necessarily a bad thing, however; if you’re looking for a comedy-drama that leans more heavily on drama, then ‘The Chair’ will be the perfect show to binge through with ease. The character focus adds more emotional depth that benefits the show.

It’s easier to care about Ji-Yoon when we care about her personal life as well. And if you’re willing to sacrifice some extra laughs for a deeper focus on character development, then this might be a show worth putting on. It is a miniseries after all, and with half-hour episodes, why not give it a try?

All six episodes of ‘The Chair’ are available now only on Netflix.