The Power of Squishmallows: What’s So Special? | Toys 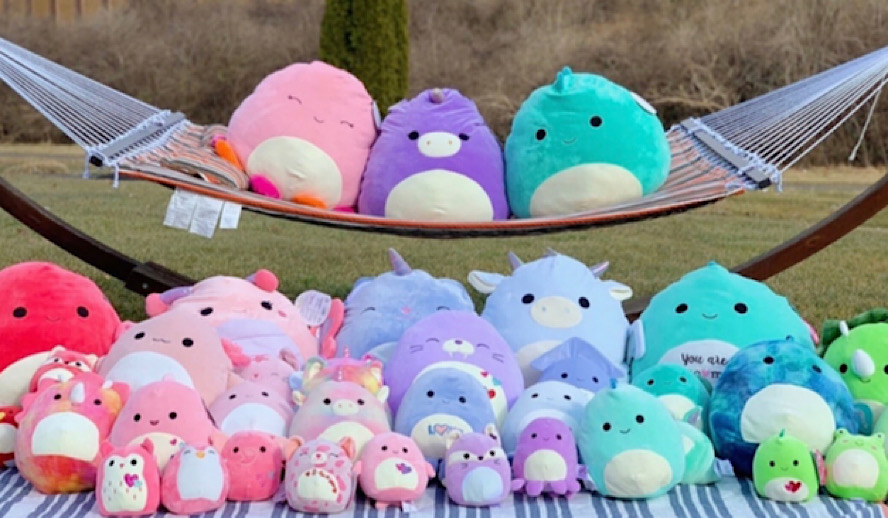 First hitting the market in 2017 and gaining notable popularity in 2020, Squishmallows have been a steady trend for two years. Though as supply increases and storage space in peoples’ homes decreases, the popularity of these stuffed animals might be dwindling. As we near the possible downfall of these Beanie Baby-esque collectibles, let’s reflect on what made them so popular in the first place.

It would be ludicrous to discuss the causes for the popularity of Squishmallows without mentioning the supposed positive effects they have on mental health. Many collectors as well as casual consumers on the popular social media platform TikTok have cited the collectibles as benefiting trauma recovery and providing positive sensory stimulation.

It is still unclear just how a simple stuffed animal is able to aid in healing trauma and generating a more positive outlook on the world – however, these plushies most definitely get the job done. Many people on social media platforms such as TikTok and Instagram have shared their experiences regarding receiving some sort of emotional and mental benefit from Squishmallows. Usually, the people that receive the biggest benefits are people with large collections, however, those with one or two Squishmallows have also explained the improvement in their mental states as they obtain these collectibles. A possible explanation for these effects can be the fact that each plushie comes with a biography tag that explains its name, interests, and personality quirks. Through these biography tags, consumers are able to connect with each plushie since they are given a basis for the personality of the toy. Most people currently collecting Squishmallows were raised on the series of Pixar films – ‘Toy Story’ – in this series toys are depicted as being alive, having emotions, mental processes, and distinct personalities.

Therefore, many of us now understand toys as having lives of their own. This aids in personal connection and secure attachment. A big part of growing up in a hostile environment that results in long-lasting trauma is the inability to form secure attachments due to the turbulent nature of the environment. This issue will often last well into a person’s adulthood, however, it is a lot easier to form a secure attachment to something that is incapable of reacting to one’s actions or emotions. An object (in this case a stuffed animal) that displays a personality can be very effective at providing a non-judgmental companion that a person who is not familiar with security and consistency can rely on. Within these biography tags, Squishmallow toys are able to say “this is who I am” and in the process teach consumers how to be proactive about their interests and personalities as well.

While the personalities are a big influence on the popularity of Squishmallows, another component that appears to be comforting is their simplistic design. Featuring dots for eyes and simple smiles, Squishmallow designs are extremely approachable. Their oversimplified appearance may also aid in aesthetic appeal due to the fact that they fit in with practically any interior as long as the consumer pays attention to the color scheme. This aesthetic appeal often results in large displays mounted along the walls in collectors’ homes. Usually, these displays will be organized by the type of animal/object that the Squishmallow is meant to resemble, but it is not uncommon to see displays organized by either size or color.

Notably, Squishmallows have a very pleasant sensory appeal. Seeing as the stuffing in these plushies is ultra-soft and (big surprise) squishy, they make great pillows or even cushions – depending on the size. Alternatively, Squishmallows have become a popular fidget and stim object due to the sensory appeal of the stuffing material as well as the outer fabric. Interestingly, for people with certain neurodivergence, Squishmallows can become a fidget/stim buddy of sorts. Since each plushie has a personality, they become friends and companions that aren’t capable of passing judgment. Therefore, if a person needs to let out excess energy through fidgeting or stimming, a Squishmallow may be a favorable outlet.

Many TikTok users with ASD (autism spectrum disorder) have expressed their attachment to the stuffed animals due to their pleasant texture, while users with ADHD (attention deficit hyperactivity disorder) cite the plushies as being fun to squeeze and knead when attempting to cope with intense emotions. Squishmallow textures seem to have a calming effect while providing sensory stimulation, which is unique for toys that are not generally geared towards toddlers. By providing a pleasant and harmless energy outlet, Squishmallows have become an unlikely ally to the neurodivergent community – both online and in real life.

Of course, aside from the possible emotional benefits of collecting Squishmallows, there is also the financial incentive. As with the Beanie Baby craze of the 90s, the artificial scarcity of these collectibles has driven up prices in the resale market. A toy that originally retailed for ten to fifteen dollars, can often be resold online for upwards of thirty dollars. One of the most popular resale websites for Squishmallows is currently Mercari. This platform allows people to buy and sell their things, much like Depop and Poshmark. Many people run Squishmallow resale businesses, which entail buying up Squishmallow stock from popular retailers and listing them online at a higher price. Due to the fact that the Squishmallow manufacturer – Kellytoy – has elected to capitalize on the popularity of the plushies by encouraging an artificial scarcity through limited releases and exclusive collections, this method of business is actually effective.

It takes a long time and many store trips to find particular Squishamallows, especially the popular characters such as Wendy the frog, Ronnie the cow, Monica the axolotl, and Caedyn the cow. Most people will not have that kind of resources and time. Because of this, resellers are able to make decent money by simply up-marking each Squishmallow they sell. Collectors often don’t mind paying higher prices for their favorite characters, which only encourages the resale market. While it is generally frowned upon to buy Squishmallow stock exclusively for resale purposes in the collector community, little is done to control this. Though oddly enough, official Squishmallow retailers have started limiting the number of plushies a person can get in a day, which is helping regulate resellers.

Whether someone is collecting due to the social media trends, the positive effect these plushies have on their mental health, or even the financial incentive of certain characters rising in price, there is no doubt as to the rampant popularity of Squishmallows. Stock seems to be becoming more abundant which may mean that Kellytoy has chosen to provide the supply for the demand instead of encouraging resale culture. Though in part, the increase in stock has more or less begun defeating the exclusivity of these toys which has driven down demand. Additionally, many collectors have stated that they are now overwhelmed with the volume of their collections. Whether or not this means that the Squishamallow trend will soon dwindle is still in the cards. But one thing is certain – these little guys have left their mark.