Must-Watch Documentary – ‘Some Kind of Heaven’: Heaven Where You Can Get It 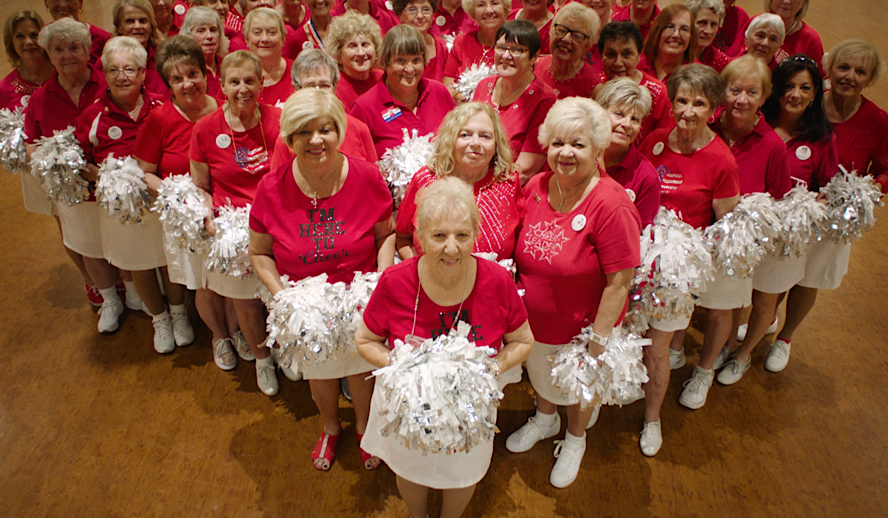 Photo: ‘Some Kind of Heaven’/Magnolia Pictures

Social security is a bleak, pipelined dream that the younger generations view more as fantasy than future. Generation Z expects to pass onto the next plane of existence still burdened by credit card and university-created debt with little else to call their own.

For the first time in my life, not being able to retire wasn’t the worry on my mind- ‘Some Kind of Heaven’ has managed to strike the fear of growing old in me. This tepid, mellow documentary was directed by the acclaimed Lance Oppenheim (‘Long Term Parking’, ‘The Happiest Guy In The World’) and followed four residents of America’s largest retirement home community: The Villages. Self-titled as the Disneyland for Retirees, The Villages is where the elderly come to truly live. Some residents claim it’s like going back to college, or experiencing a life you could only dream of, but ‘Some Kind of Heaven’ is the deeper dive into the shiny surface of the resident’s lives. The documentary focuses on the dissatisfied Anne and her drug-addled husband Reggie, the recently-widowed Barbara who misses her home and companionship, and the nomadic Dennis, who lives in a van and scours The Villages’ grounds for a wealthy woman to care for his expenses.

At the heart of this documentary, therein lies a very profound statement about class consciousness and raises more than a few questions for the average-income viewer. The dynamics of The Villages are slightly confusing, considering it acts more as a community than the traditional operation of a retirement home. The residents live in their own houses, they have acres of land to play golf on and a hundred different social clubs to join, there’s even a town square with uniquely tailored stores to fit the community’s needs. My first question was raised almost immediately: How does currency operate on Village soil? Is it like owning a membership card, or living in a country club? Is everything on a pay-to-play basis?

Some of these questions are closely answered once we meet the eccentric Dennis, who is not a member of The Villages and does not own any property within the residential areas but is still seen using the facilities. So, yes, this town operates on the same financial basis as any other, but this creates a very interesting divide between the middle-lower class and those who can afford to luxuriate away their final days at The Villages. Watching this documentary, the town is largely white and clearly able to afford anything they could possibly need with the savings they brought with them.

The Reality Amidst the Near-Perfect Ideals

This brings us to our next subject, the sympathetic Barbara. At the time this documentary was filmed, Barbara was terribly, recently widowed, and had gone four months without her deceased husband. They had previously spent almost twelve years living at The Villages, burning through any money the pair had saved and left Barbara with the burden of working full-time while well into her retirement age. Her story answers the question of love after the traditional time has passed- she seeks someone to keep her company, but she’s not sure where to find it. Watching the difference between Barbara, who wants nothing more than to be accompanied, and Anne, who seems like she could do with a break from her husband, is an interesting, complicated tangle.

Anne and Reggie, the third and fourth subjects of the documentary, have discovered that too much freedom can be a dangerous illusion when Reggie gets arrested for his drug usage. Reggie is a recreational marijuana user and at times, finds harder substances to enjoy, creating a rift in their marriage that seems almost unmanageable. This struggle is shown through Lance Oppenheim’s masterful storytelling through nothing but capturing the sincere moments and asking the right questions- the audience quickly realizes that the act Reggie puts on is not an act at all. He is simply an older man, succumbing to the lack of stimulation retirement has to offer.

To pick the correct subject matter for a documentary of this nature is vital, and Lance Oppenheim chose The Villages for its striking resemblance to ‘The Truman Show’- in that, everyone who lives there understands that there must be a layer of manipulation to keep the peace. Oppenheim and his cinematographer, David Bolen, create an exceedingly similar world to the one in the acclaimed Jim Carrey film through the lens of their camera. The documentary itself felt idyllic, and slow, even. The pace was leisurely, but not in a way that felt dragging; Instead, the peaceful shots and natural conversation between the documentary subjects gave the viewer time to process their emotions as information came and went.

The true heaven in this documentary might be the color palette and comically ridiculous shots that this film produces. Everything is on a bright, pastel color scale that is grounded by the rich greens of nature and the endless sky that seems to go on forever above Central Florida. The film captures the essence of what The Villages are trying to convey: the past can be the present. You can live in the world that you remember from your youth.

‘Some Kind of Heaven’ is special. It’s a documentary that highlights almost nothing, in particular, it doesn’t call for the change of an institution or the end of an empirical reign. The people featured are ordinary in most senses, and this is exactly what manages to draw the viewer in; Sheer humanity, the loneliness, the loss, the good times, and the bad. Films like this are not meant to change the world, because it takes the world that we have been given and brightens the colors. Things are put into perspective. You remember what lies dearest to your heart. ‘Some Kind of Heaven’ is revel in the human spirit.