A Tribute to Keith Haring: The Magnificent Artist and LGBTQ Icon 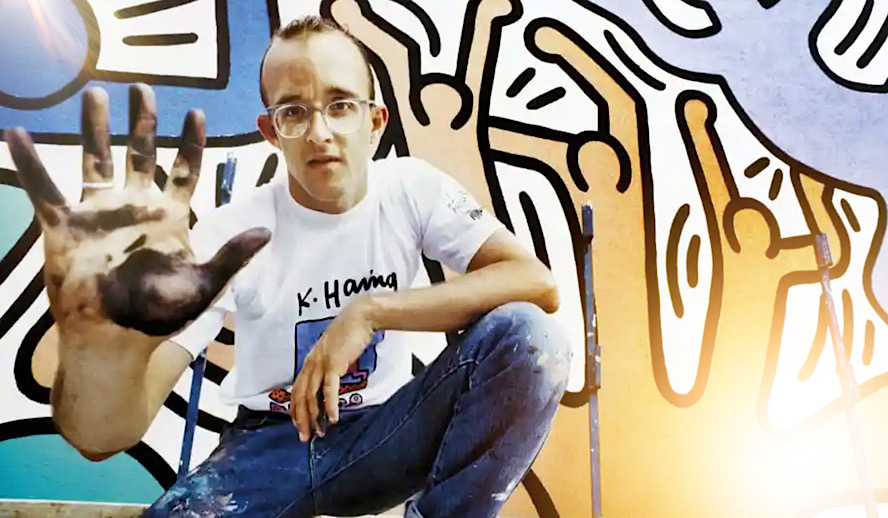 At first glance, Keith Haring’s artwork may come across as basic. His murals consist of simple, graphic lines that are boldly painted on a brightly colored background. The symbols are easily recognizable — a baby, a dog barking, stick figures dancing — but the meaning behind this simplicity derives itself from a multitude of fascinating concepts that none before Keith Haring dared to explore.

Easy Accessibility is the Point

The intention behind Haring’s work is the simplicity of it all; it is supposed to be easily recognizable because that makes it accessible. And that’s the whole point: accessibility. In the era of smartphones, where any information is available with a few touches to a screen, Keith Haring’s artwork is not only still relevant, but also reminiscent of a time where art was not so easily seen by the general public. During his time, Haring’s ideas were revolutionary in the way he digested and reframed political ideologies and activism into a medium that could be appreciated by anyone.

Haring was born in Pennsylvania in May 1954. He is one of four children, who all have names that begin with the letter “K”, and was the only boy in his family growing up. He became interested in art at a young age, taking inspiration from the great cartoonists of his time like Dr. Seuss and Walt Disney. As a young adult, Haring moved into commercial art and studied in Pittsburgh at the Ivy School of Professional Art. He studied for only two years until he lost interest and dropped out. From here, he made the decision to pursue his own style of art in the way that he wanted to.

In 1978, he had his first art exhibition at the Pittsburgh Center for the Arts which introduced him to a community of artists from whom he drew inspiration. One of these artists was the well-known sculptor, Christo, who focused on site-specific, naturalistic sculptures. Through Christo’s work, Haring learned an appreciation for public accessibility to art, something that influenced his entire body of work in years to come.

In 1980, he began drawing on unused advertising slots in the New York City subway, an area that he would eventually refer to as his “laboratory”. He often sketched on these black backgrounds with white chalk which led him to form a passion that would one day develop into the iconic, bold lines and symbols that we now recognize him for. While working in the subway, Haring made conversation with local commuters, using this as an opportunity to share not only his art but also his personality with the public. He worked very quickly, sometimes creating up to forty pieces in a single day. His audacious stylings garnered attention from the people, and these subway drawings began to form the start of a short-lived, yet highly impactful career in the art world.

In 1982, Haring worked on a project with a group of other artists to create a computer-animated piece of art that would be showcased on the Spectacolor board in Times Square. He rose to infamy very quickly, gaining traction in international art communities by 1983. He participated in the Sao Paulo Biennial in Brazil later that year, putting him in the international spotlight for the first time. During this time, Haring was also featured in many New York art exhibitions, often as part of a group of other artists all pushing their own work as well.

But, Haring never saw other artists as his competition, instead, he saw them as collaborators who came together to create beautiful pieces. He was open to working with all mediums of art and, throughout his career, produced everything from magnets to t-shirts. In 1984, he even designed a few clothing items with designer Vivienne Westwood for her Fall/Winter collection. One of these pieces was even featured in the Madonna music video for ‘Borderline’.

Obviously, all the attention his work was getting was picked up by media outlets. In 1984, he was profiled in magazines like Vanity Fair and Newsweek, leading his work to become even more iconic in nature. His artistic style revolved around minimalism: simple, bold lines that featured uncomplicated images and symbols. He was obsessed with movement and capturing the dynamism of movement in his work. His most effective medium of choice seems to be the mural, large-scale images plastered on the streets of New York City and beyond.

Haring painted his infamous Crack is Wack mural in New York in 1986. The mural was considered an act of vandalism and even led to Haring’s arrest. However, with the support of the public and art communities, Haring was released from prison easily. Late that year, Haring made the controversial decision to open the Pop Shop, a store that sold everything from coffee mugs to socks. Though Haring was criticized for the commercialization of his work, he offered a different perspective on the matter.

It was about getting his art on as many easily accessible products as possible. By combining utilitarian and artistic values, he was able to broaden the influence of his work from beyond just street murals. He collected more of an audience through commercialization that was now able to enjoy his art anywhere and everywhere. Even his work itself was rooted in this idea of accessibility, with the simple style making it easily discernible to all people.

A Short-Lived Career that Influenced Decades to Come

1987 was the beginning of the end for Haring. In the middle of the AIDS crisis, Haring was diagnosed with the disease. As an openly gay man and LGBTQ+ activist, Haring represented a threat to conservative living that fueled the representation of these issues in the media. In his last years, Haring’s art became more politically motivated with frequent references to the AIDS crisis and his position as an oppressed, gay man. One of his close friends, Andy Warhol, passed away later on in 1987, devastating Haring as well as the entire art community. Haring channeled his grief into activism, however, and founded the Keith Haring Foundation in 1989 to support AIDS organizations and children’s programs.

In 1990, Haring passed away at the tragically young age of 31. His art career was short-lived, yet influenced much of the minimalist style that we still see today. His values of accessibility influenced everything from his artistic aesthetic to the mediums he used to share his art. His commitment to using art as a political platform to share ideas and build tolerance still permeates the community today. Currently, the Pop Shop is still open and has even moved into the digital space with an online store.

Haring’s estate ensures that his values of community and accessibility to the masses are never forgotten, even thirty years after his death. Keith Haring was a firm believer in art for the masses, he chose to see the benefits of commercialism instead of the downsides in an ever-growing materialistic society. This notion fueled his ability to spread political messages and encourage others to join in activist causes. Ultimately, he wanted the style of his art, the medium, and the distribution to all be rooted in easy access that appealed to a broad audience, which was, and still is, refreshing.