Here Are the Best Films About Lonely Men in Cars: A Cinematic Goldmine 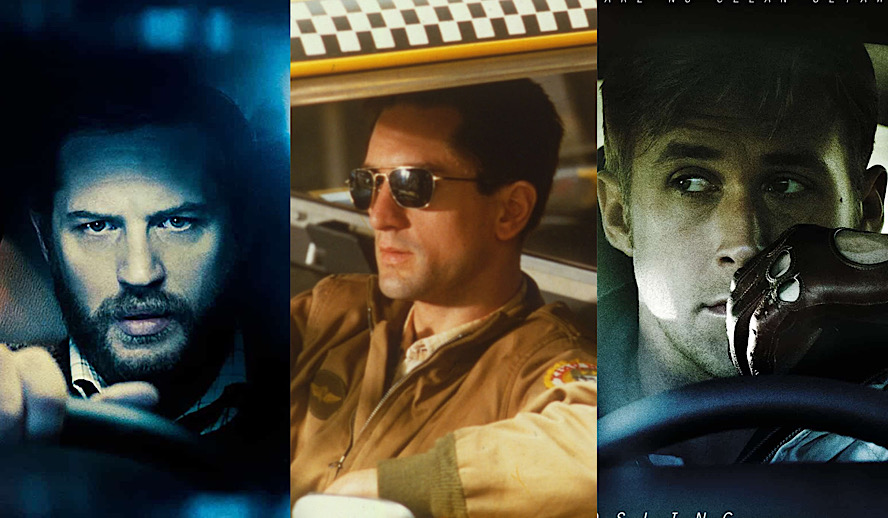 Some Of The Best Films Are About Lonely Men In Cars. Here Are Five Essentials:

When you think of “car movie”, you probably think of big action franchises like ‘Fast And Furious’ and James Bond. You probably also think of men, since cars in films tend to be synonymous with masculinity. However, in Cinema, the car is not just a marauding, sexy vehicle for destruction. Cars are obviously brilliant mechanisms for movement-led storytelling, but they can also be vehicles for introspection. There have been a number of character-led films that center on lonely, troubled male protagonists who happen to spend the majority of their time roaming around behind the wheel (preferably at night). This format has offered some of the very best films out there. The following list will rank five great car films that focus less on the vehicles themselves and more on the lone men inside them.

Written and directed by ‘Peaky Blinders’ creator Steven Knight, ‘Locke’ stars Tom Hardy as a construction worker who faces a dual crisis in his work and personal life during a pivotal drive down to London. Tom Hardy delivers a brilliant, career-best performance in a role that sees him ditch the tough-guy routine for a more subtle, three-dimensional characterisation. Ivan is a likeable, everyday man, not an intimidating hunk. The entire film is set in Locke’s car, which results in an intimate, sometimes claustrophobic atmosphere. You really feel like you get to know Ivan, and you empathise with his predicament as the night intensifies. ‘Locke’ is too low-key to be considered memorable, but it is an excellent demonstration of the car movie’s ability to look inward rather than outward.

‘Nightcrawler’ is a nocturnal thriller that presents a twisted vision of the American dream. Its anti-hero protagonist, Lou Bloom (Jake Gyllenhaal), drives around LA waiting for crimes to happen so he can film and sell the aftermath to news companies. Jake Gyllenhaal gives a brilliant performance as Lou – he seamlessly evokes the feeling that Lou is thoroughly isolated internally despite often being around other people. You root for his success despite being repeatedly shown his menacing, sociopathic behaviour. The “Lonely Man In A Car” (as it will henceforth be known) genre often contains morally ambiguous protagonists – and Lou certainly is that. Every interaction he engages in is a transaction – his disconnect from normative social behaviour is genuinely unsettling.

However, though he is obviously immoral, his environment is so hostile that it is possible to empathise with him – like many of the protagonists on this list, Lou is a product of society’s ills rather than an abnormal case. Though ‘Nightcrawler’ is a dark, cynical take on the difficulty and ruthlessness of the hustle, it also boasts a wonderfully pitch-black sense of humour, part of which owes to a fantastic supporting performance by Riz Ahmed. ‘Nightcrawler’ is a dark, engaging character study that simultaneously manages to provide intelligent societal commentary.

It would be impossible to make a list centered on lonely men in cars and not include Mad Max, the seminal lonely man. The second entry in George Miller’s cult-classic series, ‘Mad Max: The Road Warrior’, balances the action-heavy sensibility of ‘Fury Road’ with the character work of ‘Mad Max’, as Max decides to protect a community under pressure from brutal bandits. Max is the ultimate lone hero archetype. He has lost his entire family and roams aimlessly through the apocalypse in his weather-beaten car. Max’s melancholy and fading-but-still-present humanity makes him and the world emotionally engaging in spite of its madness. ‘Mad Max: The Road Warrior’ also contains some of the best stunts and action set pieces I have ever seen, most of which still look great today. ‘Mad Max: The Road Warrior’ is too action-heavy to be considered a character study, but its central character is the ultimate lonely man.

Based on ‘The Driver’, which itself is based on ‘Le Samouraï’, ‘Drive’ is one of the best films of the decade. Part romance, part violent-thriller, it stars Ryan Gosling as a mysterious driver whose name is, you guessed it, The Driver. In ‘Drive’, the car itself is often a space for powerful reflection. So many of the film’s most moving moments take place in The Driver’s car. The moment where he and Irene (Carey Mulligan) drive to the lake is wonderfully romantic, and the red traffic light scene is a somber turning point for the rest of the film. The actual process of driving is powerful – the final drive is a genuinely sad moment of separation. The car is maximised in order to be a vehicle for emotion as well as action. ‘Drive’ works just as well as a simple love story as it does a brutal, modern-day western – it is the best of the modern-day iterations of this type of storytelling.

Martin Scorsese’s tale of tormented taxi driver Travis Bickle (Robert De Niro) is one of the best films of all time, period. It is an intimate, definitive study of loneliness that seamlessly immerses you in the perspective of its troubled protagonist. You experience the world as if you were in the car, seeing the city from a disconnected viewpoint just as Travis does. Moreover, ‘Taxi Driver’ is a fantastically in-depth meditation on the pitfalls of masculinity. As Travis drives through seedy ‘70s New York, you see the world as he does, and you understand his perspective even though you don’t (hopefully) agree with his response.

Robert De Niro delivers one of the greatest ever on-screen performances here – Travis is a tricky character to portray convincingly, but boy does De Niro deliver. You feel deeply for his predicament and never question the reality of his situation. ‘Taxi Driver’ also boasts a beautiful, melancholic score by Bernard Herrman which further enhances the story’s gut-wrenching punch. As stories about lonely men in cars go, it is impossible to think of a more definitive entry than ‘Taxi Driver’.