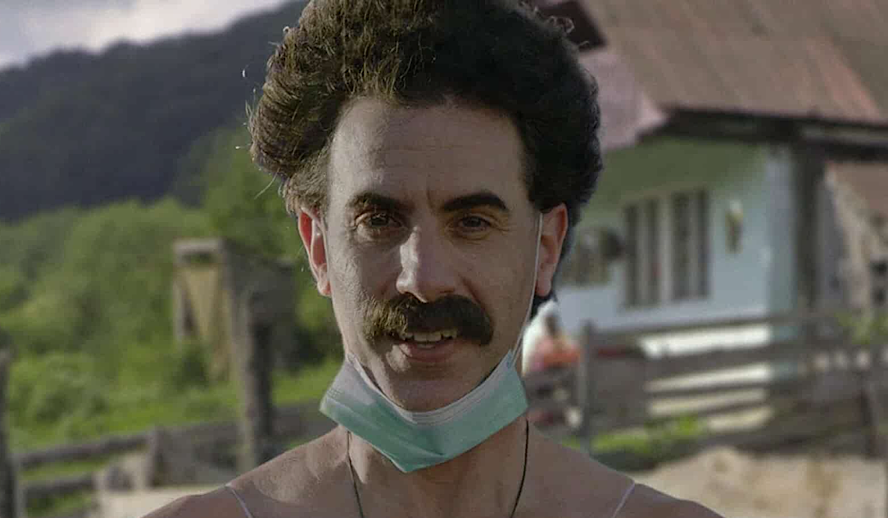 The sequel to the enormously successful ‘Borat’, Sacha Baron Cohen’s ‘Borat 2’ or precisely ‘Borat Subsequent Moviefilm‘ surprised audiences with this much-needed satirizing reflection of American culture. The film pierces through social barriers and comically brings to light some of America’s most ridiculous, and at times downright sickening sides. Directed by Jason Woliner, who directed successful comedies Human Giant, Nathan For You, and The Last Man on Earth, the film took on the challenge of the character Borat’s worldwide fame strategically, even winking at the 2006 film’s opening scenes, with Borat chasing Americans, and now in 2020, Americans are chasing Borat. This self-reflectiveness was a wise slant to take, immediately distinguishing the film as more than a sequel to the first. Taking a mockumentary approach, this is groundbreaking art that crosses lines, intelligently acknowledges American society’s idiosyncrasies, and is as pure and self-liberated from social confines as a comedy can be, and it’s brilliant.

Co-starring with Cohen, playing Borat’s daughter Tutar, was the talented Maria Bakolva, who showed impressive improvisation skills that matched, and at times even outshone Cohen. Her performance was Oscar-worthy, driving the film’s storyline and elevating every gag throughout the movie. The structure is similar to the first one, with film crews capturing people’s reactions to Borat and Tutar’s bizarre antics, but changes midway through due to the COVID-19 pandemic. Nevertheless, Cohen stays true to his art form, and this is as well-executed as a Borat film can be in those circumstances. The biggest distinctions from the first Borat is this one is more saccharine, but also cruder. If viewers can dig through the jaw-dropping content, focus past the side-splitting farce, there’s a story, plot, theme, there is heart to the film. There’s subtle, yet wonderful commentary underneath the absurdity that a special message at the end of the film verifies.

The film’s plot and comedy take aim at America’s white culture, the Republican party, and some of their extremist followers. The primary plotline draws on the exposed truths and scandals from high profile Republican politicians, and how Borat is going to utilize their darkest vulnerabilities to gain his old life back. Cohen clearly hones in on satirizing anti-democrats, patriots, holocaust deniers, Trump supporters, and coronavirus conspiracist theorists. It’s humorous and jarring how Cohen brings everything together, exposing the effect Donald Trump’s lies and misleading has had on Americans, essentially putting a spotlight on the already comically shocking state of American culture. The humor seems almost targeted for shock value, yet it’s as real as much of the real-life content that can be seen on social media, which can be attributed to Cohen’s unique brilliance.

Even during the pandemic, Cohen found time to pull off elaborate pranks and get the movie made. After the number of innocent Black Americans wrongfully killed by police officers surmounted in 2020, the public spotlight shifted to America’s brutally racist history, and a series of protests and rallies flooded the nation for months in support of Black Lives Matter and the innocent lives lost. In the meanest underlurkings American culture though, there were some retaliatory protests, one of which Cohen publicly crashed in July of 2020.  Cohen was able to convince a crowd to sing some alarming lyrics to a song he made up, and what his film crew caught on tape was jaw-dropping.

There’s meta-acting to it, Cohen plays Borat who sometimes plays other people, it’s acting within acting in a live, real-life situation. The talent that takes is insurmountable. During the beginning of the pandemic, Cohen actually lived with strangers for five days in character claiming to have no idea what coronavirus was and nowhere to go during the lockdown.

The film has received lots of attention, mostly positive, but strong negative reactions as well. This is due to an infamous scene in the movie in which Rudy Guiliani was caught inappropriately putting his hand down his pants while alone with Borat’s 15-year-old daughter disguised as a reporter. Donald Trump called Sacha Baron Cohen a “creep” and a “phony” on Twitter, who Cohen once interviewed on Da Ali G Show. Cohen did similar things in Borat as he did on Da Ali G Show and Who Is America? which were both spoof talk shows that famously tricked, and at times, exposed high-profile figures. After two decades and after worldwide fame, Cohen is still able to hilariously doop the most coveted people with his talented performing abilities, and he shows that gloriously in Borat Subsequent Moviefilm.

One of the Funniest Comedies of 2020

From beginning to end, the film is filled with endless laughs similar to the first film, except more appropriate with the times, a fresher take on a timeless character. From interacting with small business owners, religious figures, and top politicians, Cohen and Bakalova rift on their reactions with keen wit that appears hysterically shocking to the audience, but the people involved seem clueless. Their pranks infiltrated some secure and ludicrous places, such as Mike Pence’s CPAC speech. It’s an authentic and raw comedy that draws on real-life, a dialogue that everyone speaks. Cohen is a pioneer in this, with numerous films and shows that revolve around Cohen’s characters pulling crazy stunts in front of real-life people. A charm about Cohen is the line that most people wouldn’t even dare straddle, he goes beyond lengths people could possibly imagine. The endless laughs and memorably clever and appalling gags leave a ginormous impact on general audiences, which is why the film is being praised by comedians on social media.

There is an inkling of a plot and theme, but that’s not the kind of film Borat Subsequent Moviefilm sets out to be. Borat and Tutar constantly say outrageous things pertaining to sensitive subjects such as women’s rights, white supremacy, and sexual assault, to unexpecting people. It’s refreshing to see such sensitive, politically incorrect comedy be executed so brilliantly and land perfectly each time. The footage used in the movie is a comedy within itself, showing the most contradictory side of America’s leaders, like Mike Pence bragging about America’s lack of risk to coronavirus and declaring that we were ready for it, and Rudy Giuliani’s claim China manufactured the coronavirus and spread it all over the world. It’s an invigorating film for anyone that’s been baffled by the near-daily malarky that’s ensued since 2016, and even has some satirical journalistic integrity to it.

Borat Subsequent Moviefilm is now streaming on Amazon Prime, and can be viewed for free by Prime members. Sacha Baron Cohen also starred in Aaron Sorkin’s new film, The Trial of the Chicago 7, which can be streamed on Netflix.