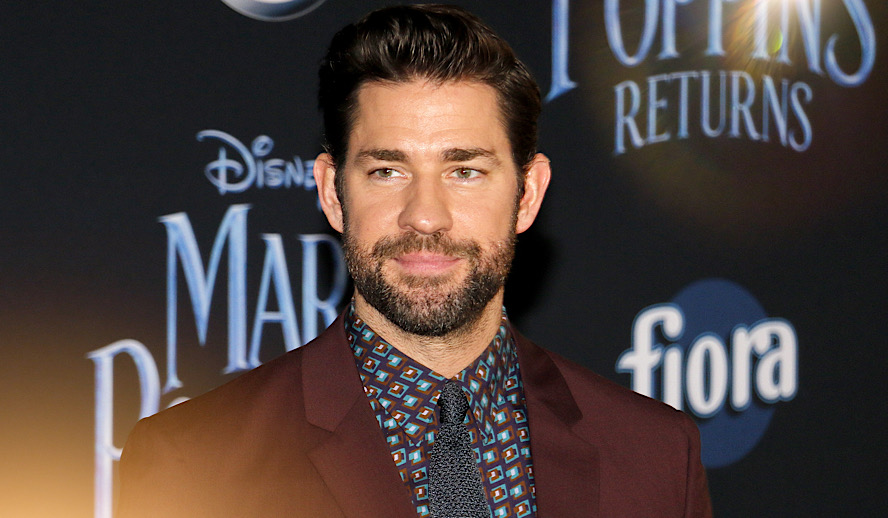 ‘The Office’ and Establishment in Comedy

John Krasinski was always meant to be in the entertainment industry. As a young man, he was already showing off his acting chops, studying theater at Brown University and attending several acting schools such as the National Theatre Institute, the Royal Shakespeare Company in England, and the Actors Center in New York City. As a young aspiring creative, he eventually moved to New York City – where he notably interned at ‘Late Night with Conan O’Brien’ – and got to work.

Related article: The Loud Power of ‘A Quiet Place’- Revisiting What Makes the Franchise So Effective & Successful

Ultimately, he received his big break in NBC’s ‘The Office,’ which ran for nine seasons and continues to be a beloved show in American television history. In the show, he played Jim Halpert – the prankster, nice guy with a crush on the office receptionist, Pam Beesly. We follow Jim as he overcomes his insecurities, navigates dating and love, and becomes a husband and father. And though the show boasts an ensemble cast, Jim is definitely one of its stand-out characters – likable from the start, but even more so as he grows into self-confidence and fatherhood.

With such a strong reputation in comedy, spanning over a whole decade, audiences knew it would be hard for Krasinski to break out of the Jim Halpert association. Even just recently, when he hosted ‘Saturday Night Live’ in January 2021, Krasinski based his opening monologue quip on how he’s still regarded as “Jim” by most. And while the joke is funny, the opposite could not be truer.

Because in actuality, Krasinski has broken out of the mold – an impressive feat for someone in the comedy space like himself. In just the past few years, he’s proved himself as a writer, director, and producer powerhouse – an intelligent businessman and a talented filmmaker. This reinvigoration of his career comes alongside his very likable, high-profile relationship with actress Emily Blunt too – cementing his presence in pop culture, if not his work. And through all of this, he’s still preserved that humble, funny guy personality of Jim Halpert, though he’s transcended it.

A Breakthrough with ‘A Quiet Place’

‘A Quiet Place,’ released in 2018, represented Krasinski’s seminal transition from on-screen to off-screen talent. Though he had directed in the past – three episodes of ‘The Office’ and one feature film called ‘The Hollars’ – this is where his true directorial genius began to shine. He first became attached to the project as a writer and actor, after instantly becoming intrigued by the project. As he says in Philadelphia Style Magazine, “within three hours, I had the idea and the specifics of how I’d want it to play out, which was bizarre. I mean, I’ve never been struck by lightning like that.” He was then ultimately encouraged to direct ‘A Quiet Place’ by his spouse, Emily Blunt, who eventually starred in the film alongside him. And the rest is history.

In a transformation similar to Jordan Peele’s hit with ‘Get Out’ after a reputation for comedy, Krasinski suddenly found himself being regarded as a top-notch director. ‘A Quiet Place’ ultimately grossed $340 million off of a $20 million budget – dominating the box office. It was also nominated for an Academy Award in Best Sound Editing, meaning it garnered critical acclaim alongside pop-culture hype and success. And all the while, Krasinski was also proving himself in other acting forays, such as with his first action, leading man role in ‘Tom Clancy’s Jack Ryan’. Ultimately, Krasinski was experiencing the 2nd rebirth in his career.

And just recently, with the release of ‘A Quiet Place: Part II,’ Krasinski has found himself with yet another hit. The sequel, according to critics and fans worldwide, has exceeded expectations and proved itself as a worthy addition to what will be a three-part trilogy. And if there’s one thing that’s certain in watching ‘A Quiet Place: Part II,’ it’s that Krasinski is a smart filmmaker. Though the film is rooted in genre, he’s able to prioritize real human relationships and feelings, while making the sci-fi world feel real. He’s also proven to be an extremely visual director too – with framing and cinematography that smartly accentuates the film’s themes and concerns.

The Future: Marvel and Beyond?

So, what’s next for John Krasinski? Well, for one, he’ll continue producing projects through his company Sunday Night Productions, which has seen successes in shows like ‘Lip Sync Battle’ and ‘Some Good News.’ The company also has an overall deal with 20th Century Fox Television, meaning we’ll probably be seeing new TV content from them soon.

Rendezvous at the Premiere of ‘A Quiet Place: Part II”

On the directing front, he’ll most likely be directing ‘A Quiet Place: Part III,’ which hasn’t officially been announced but is assumed to be in development. The film will be the last in its series, tying the Abbott family’s story in a neat bow. Krasinski will also be helping establish the Quiet Place franchise with a spin-off film based in the same world, which will be directed by Jeff Nichols. And ‘A Quiet Place’ aside, it’s pretty clear that Krasinski’s directing prospects are wide open. With the success of the series, he’s most definitely going to be able to helm whatever projects he chooses. Speculation is that he’ll attempt to branch out of the specific sci-fi genre and diversify his directing slate.

Apart from that, fans also have hopes for what Krasinski will star in, in the near future. For example, many are hoping he’ll be cast as Mr. Fantastic/Reed Richards in the new ‘Fantastic Four’ reboot. Even further, audiences are hoping that Emily Blunt will star in the films as well – with the two being a well-liked power couple in the industry. Either way, Marvel fans seem to really want Krasinski inducted in the MCU; many even hypothesized that Krasinski would have a cameo in ‘WandaVision’ way back when.

All in all, even though he’s already achieved so much in his career, John Krasinski is just getting started. He’s managed to surprise the industry and audiences alike – and there is no doubt that he will continue to do that in the future. He is no longer the plucky nice guy, Jim Halpert. He’s a powerful force to be reckoned with.