Netflix: Joaquin Phoenix’s ‘The Master’ Is a Hidden Gem That Will Have Your Head Spinning 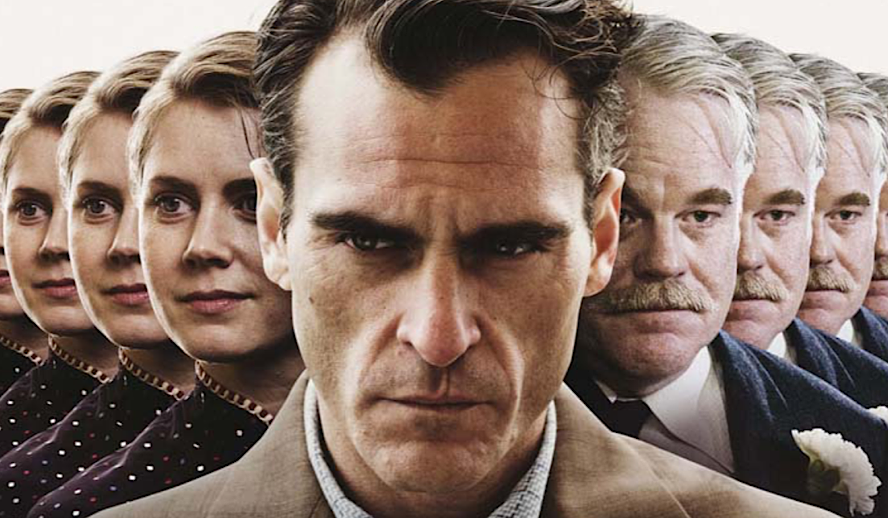 Some movies have a clear objective and purpose. You know the classic themes: defeat the bad guy, solve the case, get the girl, and so on. On the other hand, other films like to throw away simple themes and explore life on a deeper level. Why do people act the way they do? Is it their own will, or a higher power? How can mentally ill people get better? What does “better” even mean? Such philosophical questions will never have a right answer, which is what makes them so fun to explore.

The Master (2012) throws these questions at the viewer’s face in such an aggressive manner that it’s actually quite disarming. The story centers around the relationship between Freddie Quell (Joaquin Phoenix), a drunken war veteran, and a cult leader named Lancaster Dodd (Philip Seymour Hoffman). Lancaster is referred to by his followers as “The Master,” and he certainly displays the confidence required to garner such a nickname. He aims to cure people of their trauma and mental issues through psychological “processing.” The “processing” consists of repeated personal questions to his patients, physical activities, and lectures. New York Times writer A.O. Scott said it best in his review: “The subject is led, by a series of pointed, painful questions, on a search for past trauma — earlier in life, before birth, in a previous existence — that can be identified as the source of negative emotion and destructive behavior in the present.”

The most intriguing part of that statement is the “before birth, in a previous existence” part. This is where Lancaster was really ambitious with his ideas: he truly thought that people carried trauma they had from previous lives, like reincarnated negativity. I was taken aback when he said this, as I had never thought of trauma in that way. Is your current spirit capable of remembering the pain of being stepped on back when you were an ant in a past life? It may seem ridiculous, but how can you be sure of any answer?

Freddie was Lancaster’s ideal patient, a lost man that would listen to anybody for guidance as long as they sounded convincing. Freddie relied on Lancaster for companionship, as he had no other true friends besides the bottle. Both men needed each other, and used each other to a certain extent. Seeing Freddie go along with his “processing” certainly fed Lancaster’s ego. After all, this was a man who liked being called “The Master.” However, as they spent more time together, you did start to feel a genuine bond between the two of them. Freddie’s emotional fragility combined with Lancaster’s willingness to use anyone as his psychological guinea pig resulted in quite an endearing friendship. Go figure.

The movie was at its best when these two were having one-on-one conversations. Two scenes stuck out the most to me: when Lancaster first “processed” Freddie, and when they had a shouting match in their holding cells after being arrested. Both were chilling, intense conversations that revealed plenty about them as people. The fact that Lancaster was able to get a damaged man like Freddie to open up said a lot about his social skills, but he wasn’t able to completely avoid skepticism. After all, Freddie himself accused Lancaster of making things up and not knowing what he was talking about, which is something that multiple characters said throughout the film. Was Lancaster a fraudulent, narcissistic man that made things up for attention? Or was he a genius ahead of his time? I tend to think it’s a bit of both.

Freddie’s erraticness and Lancaster’s craftiness were both excellently portrayed by Phoenix and the late Hoffman, respectively. Richard Brody from The New Yorker elegantly stated “Phoenix may have formidable technique but he doesn’t let it show and doesn’t need it; he’s an actor of furious natural emotion, of inner violence with which his very being trembles as he struggles to keep it in check and to channel it. Hoffman, by contrast, is one of the great technicians, an impersonator of genius who harnesses his inner life to his craft in order to infuse the skillful imitations with emotional force.” The “inner violence” was ever-present in Phoenix’s performance, as he constantly carried an edge with him that he could never seem to shake. His portrayal of Freddie was quite similar to the way he played Arthur Fleck in Joker (2019). The skinny frame, the erraticness, and the mental illness would suggest that the two characters are related, with Freddie being slightly more tame than the iconic comic book villain.

Hoffman brought conviction and slickness to his character. Some moments he would make it seem like Lancaster truly believed in what he was saying, and other moments seemed to be more for show. The way Hoffman balanced those two things was nothing short of remarkable. This film is yet another reminder that he was one of the best actors to ever grace the planet.

Amy Adams also did well as Lancaster’s wife Peggy. Her presence was often comforting, but she knew when to be stern. One of my favorite scenes was when she woke up Freddie from his drunken slumber and begged him to “give up boozing.” On one hand, she didn’t want a drunk in her house, but she also seemed to truly care for his well-being. It was a sweet and humorous moment, but you could also see that she was being serious.

Writer/director Paul Thomas Anderson truly knocked it out of the park with this one. The screenplay is so conceptually ambitious that it definitely takes multiple viewings to fully process the scope of the film’s ideas. From the visual standpoint, he used a variety of camera angles, always switching them up at perfect times. My favorite moments were when he would use close-ups of the characters faces during “processing.” This enabled the viewer to closely examine their faces in the most vulnerable moments, a beautiful way for Anderson to invite his audience into the film. This is one of the marks of a true masterpiece. After all, the best works of art bring you into the story, making you feel like a part of its world. The Master does that and then some.

‘The Master’ is now available to stream on Netflix.