Billie Eilish’s New Album, “Happier Than Ever,” Reveals An Unknown Side of Her 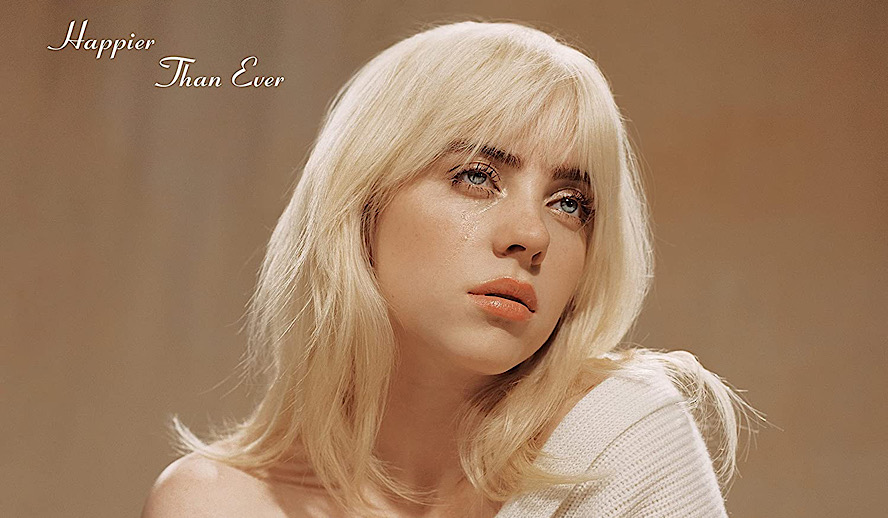 Photo: “Happier Than Ever”

We live in an era where the internet is one of the lead pilots in the music industry, while the artist sits on the passenger seat waiting for it to rave about their artistry. Since the new generation came along, the internet has been the cause of success for many. It’s terrifying to imagine what it feels like to be at the center of it all, where opinions and criticism often lead the way for others’ creations, even when the artist is a freaking genius.  It is also disquieting to imagine that feeling when you realize that the artist is just a teenager because the pressure of the world falls on them. Especially when that teenager is considered to have redefined the pop genre for the new generation, and so, how heavy does that pressure feel then?

Billie Eilish rose to fame, at the tender age of thirteen, after uploading a song she had created with her older brother Finneas O’Connell on SoundCloud, “Ocean Eyes,” which became viral overnight.  Her often soft, honey tone woke people’s curiosity, and labels were knocking on her door not long after. Her music helps the listener escape into a dreamlike reality, or more á la Billie Eilish, nightmare reality, where you can’t help but get goosebumps. In her documentary, ‘The World’s a Little Blurry,’ for Apple TV, Billie is seen overwhelmed by the pressure and the creative limitations that can happen when everyone seems to have an opinion about your identity and your art. Now, the 19-year-old looks confident and ready to crush those speaking out of turn about her.

Out With the Green, In With the Blonde.

Billie Eilish has been promoting her new album for a few months now. Her introduction was an excitable and very talked-about cover on Vogue, where she wore an elegant piece of lingerie, a custom-made Gucci corset, and glowed beautifully while looking all grown up. Her famous dark and neon green hair evolved into a light blonde, while her colorful and extremely loud prints turned into smooth and earthly neutral tones. For the first time, Billie changed her usual oversized T’s into lingerie, creating fuss around her body.

The reaction was of no surprise to her, and she was vocal about her dissatisfaction with people’s reaction when talking to Vogue about showcasing her body differently this time. She expressed, “If you’re about body positivity, why would you wear a corset? Why wouldn’t you show your actual body?’ My thing is that I can do whatever I want. It’s all about what makes you feel good. If you want to get surgery, go get surgery. If you want to wear a dress that somebody thinks that you look too big wearing, wear it! If you feel like you look good, you look good.”

She‘s been using social media to hint out clues about her latest album. Thanks to this, the expectation has increased, making fans eagerly wait for its release, while wishing for a magic wand that can make the end of July come sooner than usual. I would give her an A+ (is A+++ a thing?) when it comes to embodying the icons and inspiration for this album. Her idea was to create a record that felt timeless, borrowing inspiration from the fanciful Golden era of Hollywood; I mean, I know I’m not the only one who loves a good 1950s throwback. Just by knowing this, I’m already extra in! Classic Jazzy tunes like Julie London’s “Cry Me a River” or anything Frank Sinatra ever breathed is said to be the main source of inspiration for “Happier Than Ever.”

The pressure that, as a younger teenager, she had felt has evolved into many songs and an aura of confidence. She believes this album reflects her growth as an artist and, more intensely, her growth as a woman. In an interview for Rolling Stone, Billie Eilish shared how the pressure of creating an album had her hating the process, stating, “I hated every second of it. I hated writing. I hated recording. I literally hated it. I would’ve done anything else. I remember thinking there’s no way I’m making another album after this. Absolutely not.”

But she believes this new album is such a big step towards growth that her mentality has completely shifted; she continued to say, “I’ve grown so much and gotten so much better in my voice, it’s crazy to think about,” finally accepting that she has fallen head over heels with the craft and just music-making in general. Billie felt like this time around when creating “Happier Than Ever,” the flow was organic, natural, and incredibly grounded.

Billie has stated in several interviews that she can genuinely say she is “Happier Than Ever,” that does not mean that happiness is the only place she lives in, but at the moment, that’s the place she is at.  She is not the sort of artist that shies away from depth; her beautiful lyrics and her perception of the world has people worldwide idolizing her, no matter their age. Plus, the fact that she is beautifully raw with her audience makes her relatable and approachable amongst her fans. She might be private with details about her life, but when it comes to feelings and opening up about emotions, she is right there with you, ready to share anything and everything for her listeners to feel understood.

Even if the album’s name is “Happier Than Ever,” Billie promises to stay true to her roots. The album apparently does not consist of poppy romantic comedy tunes, but instead, it contains sixteen songs that touch on significant matters, such as emotional abuse,  misuse of power, and relationship mistrust.

And What About Change?

Although Billie began her career when her body was still not comfortable in itself, she admires change, loving every second of it because it has brought the confidence she has long searched  for; Billie shared lastly to Rolling Stone, “I think change is one of the best gifts in the world.”

Her last post consists of a blonde Billie Eilish joyfully playing a song by The Strokes, hair flowing in the air, while she cruises in her famous matte black dodge challenger. Billie seems unbothered by the pressure she once felt, owning her growth as a woman–  Billie Eilish’s new album “Happier Than Ever” is due to come out this Friday, July 30th.