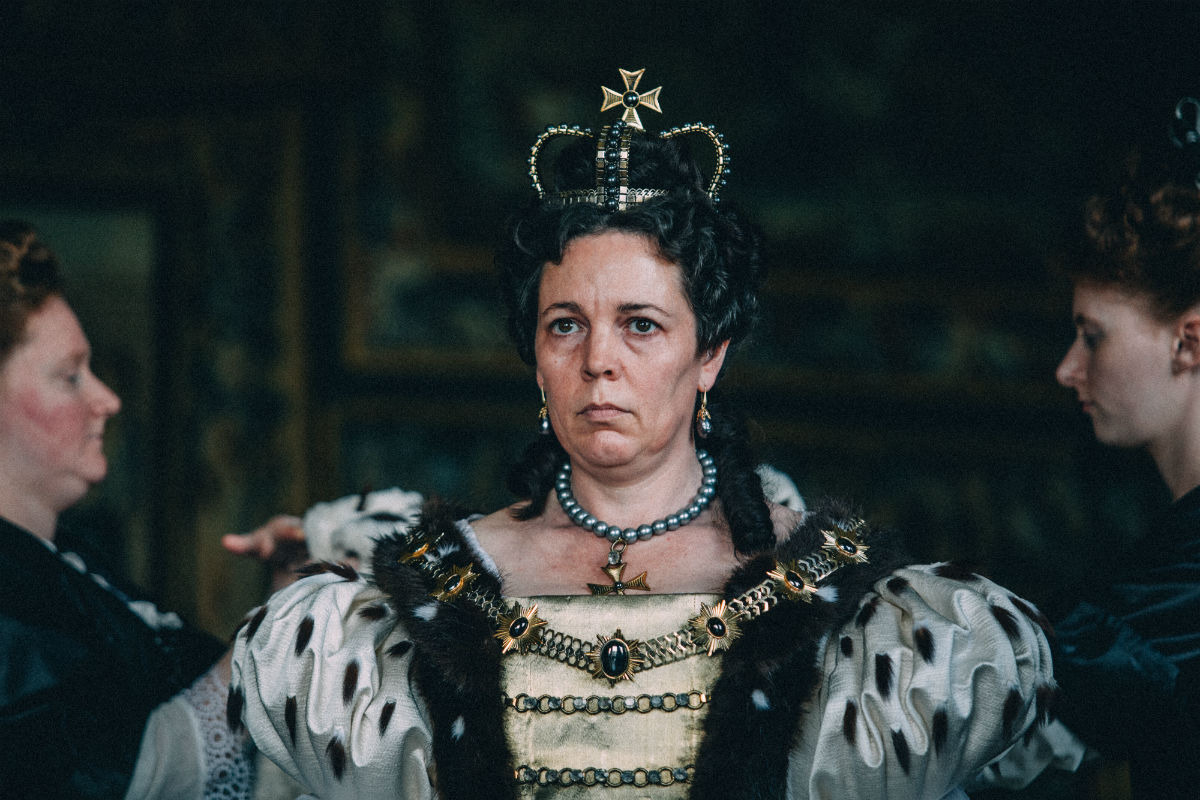 Yorgos Lanthimos’ The Favourite – is not your standard period film. Complete with duck racing, peculiar dances, and filthy language, it is a tragic comedy set in eighteenth-century England inlaid with the signature Lanthimos darkness. The tale follows two women, Sarah Churchill, and Abigail Hill, as they wrestle for the affections of Queen Anne – wanting a hand in more than just the politics.

An acerbic script, coupled with non-conventional editing and camerawork, plus the grand visuals – that are as grotesque as they are stunning – make this film an utterly intriguing watch. The script is fast and snappy, eliciting plenty of laughs throughout the feature. The set and costume designs are detailed and exquisite, with several scenes opening with the distinct look of a Renaissance masterpiece that then comes to life with movement. Actress Olivia Colman, who plays Queen Anne, has excitedly shared that the team were meticulous even down to the types of food that are in the room every time the Queen is with either Sarah or Abigail – healthy food with one and sweets and junk with the other – teasing the true intentions of each character to those who were looking. Fish lens and wide shots are used often, not only showing the opulence these characters are surrounded by, and amplifying how small they are in contrast, but also giving a sense of distortion and claustrophobia as you can see precisely where space ends. In other scenes, Lanthimos’ aversion to the classic “shot reverse shot” gives way to wide pans and several moments where the camera moves fluidly around the room. It gives the sense that you are walking around the space and organically getting to know these characters and their surroundings. The cinematography is masterfully done, with Lanthimos and Robbie Ryan managing to capture each tonal shift in the story (of which there are many) from satirical, to funny, to drama, to love story, to heartbreaking, to thriller perfectly.

However, the brilliance of this film comes from what they do with gender roles. In this film, interestingly, it is the men who are relegated to be the ornamental background players, existing only to support the women while they do the scheming and powerplay. In fact, there are very few scenes where the women are wearing much makeup, while the men are always immaculately done up with makeup, wigs and heels. ‘Your mascara is running. If you’d like to go fix yourself, we can continue this later,’ Sarah Churchill (Rachel Weisz) says scathingly, at one point, to Nicholas Hoult’s character, Robert Harley.

Furthermore, the truly fascinating thing this film does is that it never claims that these three women are any less greedy, conniving and ruthless – it simply portrays them as the complex, horrific and wonderful characters they are. When asked if a film about females mistreating each other might be considered a setback, Olivia Colman explained, “How can it set women back to prove that women fart and vomit and hate and love and do all the things men do? All human beings are the same. We’re all multifaceted, many-layered, disgusting and gorgeous and powerful and weak and filthy and brilliant. That’s what’s nice. It doesn’t make women an old-fashioned thing of delicacy.”

And that’s what makes The Favourite so exciting to watch – the fact that the three leading characters are so imperfect, funny and complicated. They change so constantly as you learn different things about them that you never really know who the antagonist is. Of course, no review of this film would be complete without mentioning the stellar performances of the entire cast. Olivia Colman, Rachel Weisz and Emma Stone emote these changes brilliantly, elevating the script to new heights each time. The Favourite is an entertaining ride that unbalances you every single time you think you have a grasp on the characters and events. Worth a watch!